Missouri could become first state where no abortions can be performed 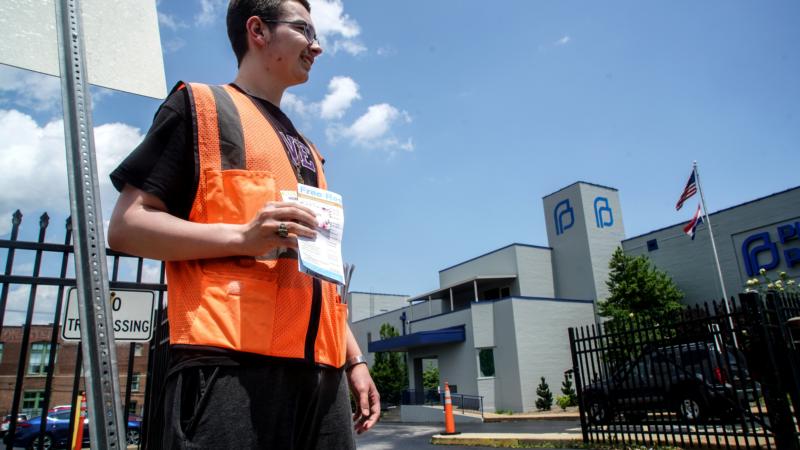 A pro-life supporter stands outside the Planned Parenthood facility in St. Louis May 28, 2019, holding pamphlets about alternatives to abortion. The Missouri Department of Health and Senior Services has told Planned Parenthood officials it will not renew the facility’s license expiring May 31 unless the clinic makes changes to comply with various state health regulations. (CNS photo/Lawrence Bryant, Reuters)

ST. LOUIS (CNS) — The Missouri Department of Health and Senior Services has told Planned Parenthood officials it will not renew its St. Louis clinic’s license expiring May 31 unless the clinic makes changes to comply with various state health regulations.

Just hours before the license was to expire May 31, St. Louis Circuit Judge Michael Stelzers issued a temporary restraining order allowing the clinic to stay open until June 4. Planned Parenthood had sought the court action and Stelzers issued his order after a May 29 hearing on the matter.

The Planned Parenthood clinic is the only abortion facility in Missouri. If it closes, Missouri will be the first state without an operating abortion facility since the U.S. Supreme Court issued its ruling on Roe v. Wade in 1973. Women who want an abortion would have to go to the neighboring state of Illinois.

CBS News May 28 quoted Planned Parenthood officials as saying that the state health department had informed them May 20 that the facility might lose its license.

According to the news report, state health officials said the clinic must provide state-mandated counseling services, conduct an additional pelvic exam on a woman prior to performing her abortion and resolve what health officials described as “deficient practices” by doctors at the clinic.

Missouri Gov. Mike Parson was scheduled to hold a news conference midday May 29. Also, a hearing was planned that afternoon regarding Planned Parenthood filing for a temporary restraining order on actions by the state health department.

Meanwhile, Parson signed into law the Missouri Stands for the Unborn Act May 24. It bans abortions on or beyond the eighth week of pregnancy.

Set to take effect Aug. 28, the law provides an exception in cases of medical emergencies, but there are no exceptions for rape or incest. Doctors who perform abortions after eight weeks face five to 15 years in prison. There is no punishment for the mother.

With the ban, the state’s lawmakers” have taken a giant step forward for the pro-life movement,” said St. Louis Archbishop Robert J. Carlson. “We need to continue to show persistence and determination in proclaiming a culture of life.”

On May 28, the American Civil Liberties Union of Missouri announced it will seek signatures to put a referendum on the 2020 ballot to repeal the new law. The organization has until Aug. 28 to gather 100,000 signatures to place the issue on the ballot for an up-or-down vote.

If the organization gets the needed signatures, the law will not take effect as scheduled and voters will decide its fate. A “yes” vote would mean the ban becomes law, while a “no” would mean it doesn’t.