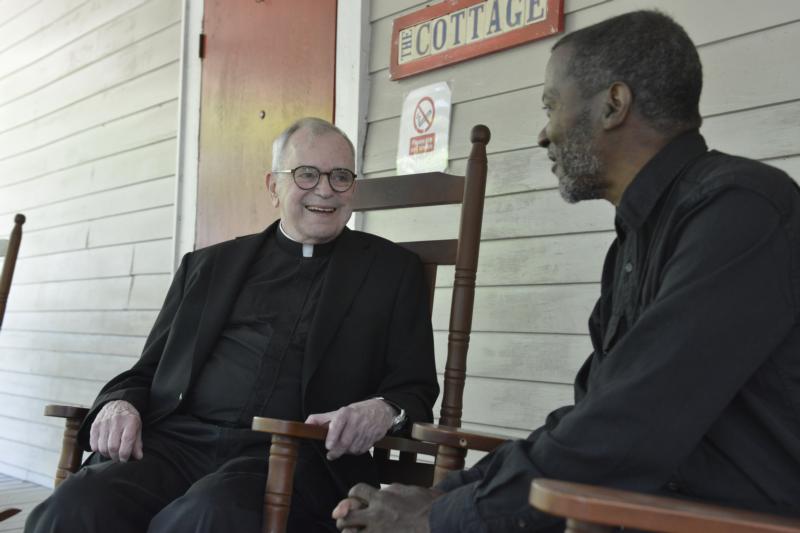 Father Paul Desrosiers, a priest of the Archdiocese of New Orleans, who cofounded the first Catholic hospice in the U.S. for HIV-AIDS patients in 1985, talks to a resident of Project Lazarus April 26, 2019. At the height of the epidemic, the disease meant imminent death. Project Lazarus still serves today as a transitional residence for those with HIV. (CNS photo/Frank J. Methe, Clarion Herald)

NEW ORLEANS (CNS) — In 1985, when the HIV-AIDS tsunami was crashing ashore in every American city, Father Paul Desrosiers was burying one more person at Holy Trinity Church in New Orleans.

Burying the dead during an epidemic is about as tough as it gets among the corporal works of mercy, but Father Desrosiers had another, perhaps even more difficult, challenge: counseling surviving family members in their grief, some of whom were angry, confused, unreachable and intransigent.

“It was tough,” Father Desrosiers said. “It was difficult because I was dealing with sick people, dying people, all the time, and it was a wide range of people, young people and older people. I had to deal with a lot of families who could not accept the reality.”

Just a few blocks away at Tau House, a Catholic center in the French Quarter for those on the fringes, Franciscan Father Bob Pawell was dealing with the same reality.

HIV-AIDS in the mid-1980s was an inescapable death sentence. It also carried with it a cultural and moral stigma because most of its victims contracted the disease through homosexual relations or through sharing needles while ingesting illicit drugs.

All Father Desrosiers saw was another casket.

After reading about an AIDS hospice run by the city of San Francisco, Father Desrosiers and Father Pawell made an appointment to talk to New Orleans Archbishop Philip M. Hannan. Father Desrosiers had the brainstorm of converting the two-story, former Benedictine Sisters’ convent next to Holy Trinity Church into the first Catholic hospice in the United States for AIDS victims.

Father Desrosiers didn’t really have a business plan. All he had were the death statistics.

“I didn’t go in with anything — I just asked the archbishop if the diocese would support it financially at the beginning,” Father Desrosiers said. “I just basically told him about all the work we were doing with HIV patients and that I really felt there was a need for residential care. At that time, ‘hospice’ wasn’t even in our vocabulary.”

The convent was converted into Lazarus House, a hospice with about 10 bedrooms. At a time of paranoia and fear over the scientific causes of the disease, Father Desrosiers was able to convince a small but influential group of well-heeled Catholic women to support his mission of serving the dying, both financially and through volunteer work.

“Initially, everybody who came there during the first five years died — every single person,” Father Desrosiers said.

With the epidemic raging, Father Desrosiers looked at the massive rectory in which he lived — built at a time when there were three or four priests in every parish — and asked permission to expand the hospice by converting the rectory into additional hospice bedrooms. He moved down the street to the St. Vincent de Paul rectory.

That gave the newly named Project Lazarus 24 beds to care for the dying. The location, however, continued to remain anonymous.

“Overall, we knew so little about what the illness was about, and I think people were just really paranoid about that,” Father Desrosiers said.

Steve Rivera, the current director of Project Lazarus, said the decision to shepherd such a controversial project at the time was prophetic.

“Father Paul broached a very unpopular topic that was full of fear and he addressed it head-on,” Rivera said. “All he could see was beautiful people with beautiful souls. He saw the face of Jesus in every person. He just trusted. Every time we expanded for more space, he would have to move to a different place. He was more concerned about the mission.”

Project Lazarus will bestow its Lifetime Achievement Award on Father Desrosiers at a May 10 gala. As someone who shuns the spotlight, Father Desrosiers, currently the pastor of Transfiguration of the Lord Parish in New Orleans, said he doesn’t revel in all the fuss.

“I really feel humbled — and just a little bit uncomfortable — with it,” he said noting that the impact of Project Lazarus was significant because the work that happened there, he said, continues to impact how he reaches out to people.

Today, with medical advances that can extend lives, Project Lazarus is a transitional housing facility for people living with HIV who have nowhere else to go. The residents, Rivera said, are nurtured and “learn to live abundantly so they can be functioning citizens who want to give back.”

When Project Lazarus had just begun — and when it had to remain anonymous because of public scrutiny — Rivera said Father Desrosiers told him it seemed like “a miracle that everyone passed away at night.”

The timing allowed the workers from the Orleans Parish Coroner’s Office to come and go, quietly, in the dark.