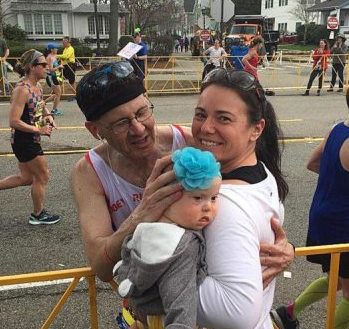 Father Michael Tobin greets Caitlin McCabe Polson, and her son, Joey at mile 20 of the Boston Marathon April 15, 2019. By running the marathon the priest raised funds to help children like Joey have needed heart surgeries. (CNS photo/special to The Record)

LOUISVILLE, Ky. (CNS) — What began as the fulfillment of a personal goal became a life-changing endeavor when Father Michael Tobin entered the Boston Marathon as a charity runner this spring.

He finished the April 15 race in four hours, 21 minutes and 52 seconds. But that’s not really the number that counts.

Father Tobin, who is pastor of two parishes, managed to raise $46,455 for his charity team — the David Ortiz Children’s Fund — with the help of his parishioners and staff and individuals who donated online.

The money will pay for nine children with Down syndrome to have potentially life-saving heart surgeries.

“It’s more than running a race with a good time, it’s about letting someone else run their race, their life,” he said in an interview after the marathon.

He encountered one of those lives at mile 20. Caitlin McCabe Polson and her 9-month-old daughter Josephine, who goes by “Joey,” were waiting for him. Joey is expected to receive one of the surgery grants from his fundraising efforts.

“It was a small miracle; I’d never met them,” Father Tobin said of their meeting on the race course. He knew they’d be at a tent near mile 20. “When I got there and saw the tent, I just started yelling.”

Max Michalak’s family encouraged Father Tobin to ramp up his fundraising efforts, making a donation and explaining the importance of these surgeries to children like Max, who had heart surgery last summer and was given just six months to live.

“I wore Max’s wristband during my race and I personally ironed on Max’s Name to my racing singlet. He was with me all the way,” said Father Tobin.

He first met Max as a daily communicant at his parish in Shelbyville, the Church of the Annunciation.

“I have enjoyed bending low at daily Mass to give him holy Communion,” he said.

Max’s mother, Penny Michalak, recently asked for Max to be anointed and Father Tobin gave him the apostolic blessing for the dying. His condition was not expected to improve, Father Tobin said.

These things were far from the priest’s mind when he first planned his 26.2-mile run in Boston.

He’s run 36 marathons since 2005 and running Boston had been a long-term goal. With the 25th anniversary of his priesthood on the horizon last fall, Father Tobin had an idea: In lieu of gifts, he’d ask for donations to help him win a spot on a charitable team. His parishioners from Annunciation and St. John Chrysostom Church in Eminence, didn’t disappoint. Their initial donation of $4,000 helped him gain a spot in the race and started his quest to fund heart surgeries.

While he’s elated to have run in Boston, Father Tobin said he could have run a better marathon.

“I awakened with this zeal to try to race the entire 26 miles. My training only allowed me to race the first 21. At 21.1, I started growing really fatigued because I ran faster than my training,” he said.

“It’s common to people who are running Boston for the first time. You get so thrilled and excited,” he told The Record, archdiocesan newspaper.

In all, Father Tobin’s excitement was fueled by about 60 donors. He said he’s thankful for them all as he celebrates his 25th anniversary as a priest.

McCallister is editor of The Record, archdiocesan newspaper of Louisville.