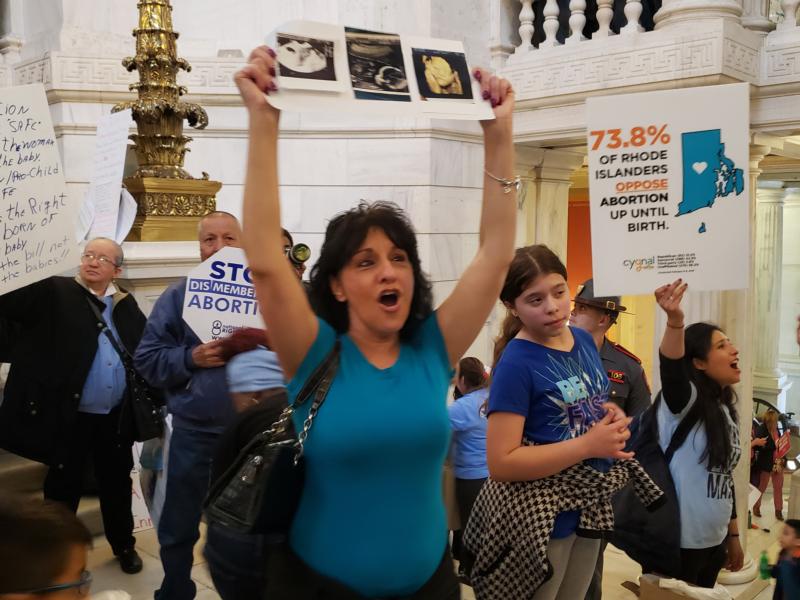 Diane Pennine holds photos of her daughter’s ultrasound in the rotunda of the Rhode Island Statehouse in Providence late May 14, 2019, to protest a Senate bill aimed at expanding legal abortion in Rhode Island. Hundreds of activists who gathered at the Statehouse erupted into cheers as news spread that the committee voted 5-4 against the measure, which supporters said would have enshrined Roe v. Wade into state law. (CNS photo/Brian Fraga, Rhode Island Catholic)

PROVIDENCE (CNS) — A bill that pro-life legal analysts said would have turned Rhode Island into an “abortion haven” failed to pass the Senate Judiciary Committee May 14.

Hundreds of pro-life activists who gathered at the Statehouse erupted into cheers as news spread that the committee voted 5-4 against the Senate version of the bill that supporters claimed would have enshrined Roe v. Wade — the Supreme Court decision legalizing abortion nationwide — into state law.

“I’m so grateful to God. I’ve been praying for this outcome. I’m just so overjoyed,” said Dan Galipeau, a parishioner of Holy Name of Jesus Church in Providence.

Since the bill failed in committee, it is likely the General Assembly will not pass a bill in the current legislative session to expand access to abortion.

“I think today’s vote puts it to bed for this session,” said Barth Bracy, the executive director of the Rhode Island Right to Life Committee.

Father Bernard Healey, the director of the Rhode Island Catholic Conference, said in a May 14 statement: “We applaud the Senate Judiciary Committee for their courageous vote this evening in defense of human life and human dignity.”

The bill’s supporters, many of them wearing pink shirts and holding signs from Planned Parenthood, chanted “Shame” and “Vote Them Out.” They marched and demanded that Senate leaders still bring the bill to a floor vote before the entire Senate. There was also speculation that senators who support the bill will try to attach it to other legislation.

Bracy said he believes these efforts will not be successful, but he said the state Right to Life Committee will not be complacent about maneuvers to revitalize the Senate bill, a version of which already passed the state House of Representatives in March.

“This bill was a brazen attempt to use fear, uncertainty and doubt to push an extreme abortion agenda,” said Bracy, who added that the pro-life movement in Rhode Island also had to push back against local media that he said frequently mischaracterized the bill to make it sound less extreme.

“Enough members of the Senate read the bill, read our legal analysis and understood that and were not bullied by a lying media,” Bracy said.

A seven-page analysis on the legislation, written by attorney Paul Benjamin Linton, a lawyer who served as general counsel of Americans United for Life, said the bill would turn Rhode Island into “an abortion haven” where any unborn child could be killed up until the moment of birth, with the state given no recourse to restrict or regulate abortion facilities.

Supporters said the legislation would have only reinforced what the U.S. Supreme Court currently permits, but pro-life advocates warned that the bill’s language would have paved the way for late-term abortions in Rhode Island.

Hours before the Senate Judiciary Committee’s vote, Providence Bishop Thomas J. Tobin tweeted that he was counting on the committee to reject “the radical pro-abortion bill,” saying it “goes way beyond Roe v. Wade.”

Bracy said he received several phone calls from Rhode Island residents after New York Gov. Andrew Cuomo in January signed the Reproductive Health Act, a law that pro-life and Catholic leaders warned was written in such a way as to allow babies to be aborted up until they are born.

“To a large degree, what happened in New York woke up a lot of the people in Rhode Island,” said Bracy, who added that the state Right to Life Committee made sure lawmakers heard from their constituents about rejecting the abortion bill.

In other state action on abortion legislation, the Missouri Senate approved a bill May 16 to outlaw nearly all abortions when a fetal heartbeat is detected. The bill, dubbed Missouri Stands With the Unborn, needs another vote of approval in the Missouri House before it can go to the desk of Gov. Mike Parson, who is expected to sign it into law.

In Vermont, the state Legislature May 10 approved a bill creating a “fundamental right” to abortion and prohibiting government entities from restricting abortions.

As of May 16, Vermont Republican Gov. Phil Scott said he hadn’t decided if he will sign the bill or not.

Fraga is a correspondent for the Rhode Island Catholic, newspaper of the Diocese of Providence.

NEXT: Gomez: ‘Every abuse case one too many,’ but confession bill no solution