SACRAMENTO, Calif. (CNS) — Sacramento Bishop Jaime Soto published a list of 44 priests and two permanent deacons from the diocese that have been credibly accused of sexually abusing 130 minors or young adults, aged 25 and under.

The list, published April 30, is based on a review of the personnel records of nearly 1,500 bishops, priests and permanent deacons conducted by diocesan staff and an independent consulting firm retained by the diocese. It spans seven decades, from 1950 to the present.

“This list is heartbreaking. It is a sickening and sobering account of the history of sex abuse by clergy in our diocese,” said Bishop Soto. “It is repulsive to see the evil acts that were perpetrated upon innocent children and young people entrusted to our care.” 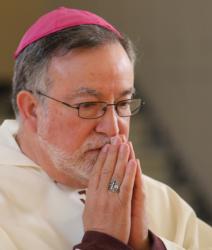 Bishop Jaime Soto of Sacramento, Calif., prays during Mass in the Chapel of the Immaculate Conception at Mundelein Seminary at the University of St. Mary of the Lake in Illinois, near Chicago Jan. 3, 2019. (CNS photo/Bob Roller)

The bishop said: “the accounting had to be done. I need to own and atone for what happened in the church’s name. I have to be accountable to God and his people. That can only be done where there is transparency.”

The list was compiled by the diocese with the assistance of Kinsale Management Consulting headed by Kathleen McChesney, formerly the third ranking official at the FBI and the founding administrator of the Office of Child Protection at the U.S. Conference of Catholic Bishops. None of the men listed are currently in ministry with the diocese.

For the purposes of this list, “credible” represents a reasonable person’s conclusion that, based on the information at hand, the accusation is more likely to be true than not.

The list is available on line at www.scd.org/clergyabuse. It is divided into five parts: priests from the diocese; priests from religious orders; priests from other dioceses; permanent deacons; and priests who briefly served or lived in the diocese, but where the alleged incidents of abuse occurred outside the diocese.

Each name on the list is linked to a file showing the name of the priest or deacon, his status or last known location and other biographical information. It lists his diocesan assignments and provides information on the nature of the alleged abuse, when it took place and when it was reported to the diocese.

Also on April 30, Georgia’s Attorney General Chris Carr announced the start of an investigation into past sexual abuse claims within the Catholic Church in Georgia.

The state’s two bishops, Atlanta Archbishop Wilton D. Gregory and Savannah Bishop Gregory J. Hartmayer, issued similar statements April 30 saying they offered “full support and cooperation” for the third-party file review and were doing so “in the spirit of continued transparency and concern over the sexual abuse crisis in the Catholic Church in the United States.”

The bishops agreed to a memorandum of understanding concerning the process and both expressed “genuine concern for all who have been hurt directly or indirectly by abuse of any kind by anyone.”

They both called the review “an important step in the long journey forward.”

A report will be issued after the review is completed.

NEXT: Abuse survivors find healing rooted in Catholic faith can aid the church