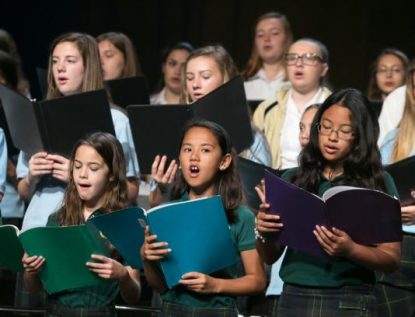 ORLANDO, Fla. (CNS) — In response to an increased waiting list of one scholarship program, Florida Gov. Ron DeSantis signed a bill that will create another scholarship program that could benefit as many as 18,000 students in the 2019-2020 school year to attend private schools.

After Florida lawmakers gave final approval to the measure, S.B. 7070, and it was signed by the Republican governor, the Family Empowerment Scholarship Program was established, which was welcomed by advocates of parental choice for education but disappointed opponents who believe this is another step to defund public schools.

Among those who applauded the bill was the Florida Conference of Catholic Bishops, the legislative lobbying arm for the Catholic Church and bishops of Florida.

James Herzog, associate for education at the conference, spoke to the House Appropriations Committee about the bill in March about how the conference “strongly supports” efforts, such as the Family Empowerment Scholarship, to address the 13,000 on a waiting list for the popular Florida Tax Credit Scholarship Program, established in 2001.

The tax credit program provides $750 transportation scholarships for children attending public schools in another school district and private school scholarships worth up to $6,519 in elementary, $6,815 in middle and $7,111 in high school for students whose household income is no more than double the poverty rate. Those whose household income is between 200 and 260 percent of poverty are only eligible for partial scholarships.

“During the past two years, state officials reported that total funds actually contributed to the program had reached a plateau. In 2017, companies pledged $639 million in donations,” Herzog explained. “This level of funding barely met the 90-percent threshold for that year. As of November 2018, contributions only totaled about $637 million.”

Herzog described the Family Empowerment Scholarship Program as “another remarkable step forward” by Florida to allow “parents to determine the best educational settings for their schoolchildren.” But he added that while the legislation is in place, “time will tell” how calculations for determining the scholarship amounts per child will impact nonpublic school families and communities. Herzog explained participating families will receive smaller awards for grades six through 12 than those students who garnered scholarships through the Florida Tax Credit Scholarship Program.

“State leaders have clearly recognized the importance of relieving the considerable pressure created from having record waitlists for scholarships,” Herzog said. The Florida Conference of Catholic Bishops will continue to work with the Legislature and key stakeholders as the program moves forward to help ensure its success.

Step Up For Students and AAA Scholarship Foundation are the two scholarship funding organizations that have been approved by the state of Florida to administer the Florida Tax Credit Scholarship Program. Families apply for the scholarship through either one of those two organizations.

Before this year’s legislative session started, Step Up reported that about 13,000 students were approved for the Florida Tax Credit Scholarship Program but had to be placed on a waiting list due to the funding shortfall. Thousands of additional families had partially completed applications and thus expressed interest in the program before the annual submission window was closed.

According to Jon East, communications director for Step Up for Students, “smaller increases in annual corporate contributions are the driving factor.”

“Under the scholarship law, companies that contribute to approved nonprofit scholarship organizations receive a 100 percent credit against six different state taxes,” East wrote in a blog. “The cap on those credits increases 25 percent following any year in which 90 percent of the cap is raised, which allowed the program cap to grow from $140 million in 2010 to $874 million in 2018.”

In addition to addressing the current waitlist of 13,000 students, the new Family Empowerment Scholarship Program allows for an additional 5,000 students to be served for a total of 18,000 scholarships for the 2019-2020 school year.

“Over time, the new program could satisfy the considerable demand from all low-income families seeking a nonpublic school education for their child,” Herzog said. “The new law allows for the (the new scholarship) to grow to about 25,000 students by the 2020-2021 school year and 32,000 by 2021-2022 school year.”

News reports said the Florida Education Association teachers’ union contends the Legislature is harming neighborhood public schools and plans to host a “summit” May 18 in Orlando to discuss issues such as vouchers and this new scholarship.

“There has indeed been a lot of talk about the possibility of a new school choice lawsuit being filed in the wake of Senate Bill 7070’s passage,” Herzog said. “School choice advocates are cautiously optimistic that the new Family Empowerment Scholarship Program would survive the possibility of future legal challenges.”

While Florida Tax Credit Scholarship and the new Family Empowerment Scholarship offers assistance to low-income families, Florida has other scholarships that offer parents and guardians of children with special needs to attend private schools, including the McKay and the Gardiner scholarships.

In a separate move under the annual budget, the Legislature approved increased funding for the Gardiner Program to $147.9 million, which will serve at least 2,000 more students. The Gardiner program serves students with specific special needs, including autism, Down syndrome and spina bifida. Students on the autism spectrum make up about 63 percent of the Gardiner student population.

Scholarships average about $10,400 and can be used to pay for private school tuition, fees, textbooks, tutoring, school supplies, computers, therapies and more. Unspent money can roll over from year to year and students may save for higher education endeavors. For 2018-19, the program served 11,529 students with scholarships from Step Up For Students, and 800 students from AAA Scholarship Foundation.

PREVIOUS: Missouri lawmakers ‘clearly on side of life’ with passage of abortion bill

NEXT: Funeral pays tribute to homeless man who lived by Indianapolis cathedral