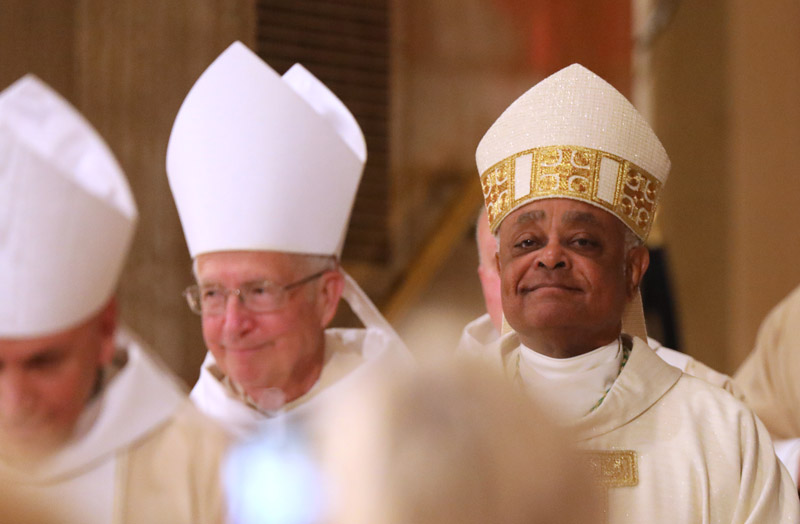 Archbishop Wilton D. Gregory arrives for his installation Mass at the Basilica of the National Shrine of the Immaculate Conception in Washington May 21, 2019. (CNS photo/Bob Roller)

WASHINGTON (CNS) — During his installation ceremony as the new archbishop of Washington, Archbishop Wilton D. Gregory acknowledged the struggles that have recently impacted the Catholic Church and urged Catholic leaders and laity not to lose faith.

“We stand at a defining moment for this local faith community,” he said in his homily during the May 21 Mass at the Basilica of the National Shrine of the Immaculate Conception, stressing that “our recent sorrow and shame do not define us” but should chasten the archdiocese to continue the work ahead.

The archbishop, reflecting on the day’s Gospel reading about the apostles who had grown fearful with turbulent weather at sea, said the narrative is a “worthy metaphor for us as people of faith who have been tossed about” by “waves of unsettling revelations.”

The former leader of the Atlanta Archdiocese who also had served as the bishop of Belleville, Illinois, and as an auxiliary bishop of Chicago, did not mention the sexual abuse crisis by name but clearly he didn’t have to.

The congregation in the basilica greeted the archbishop with some cheers during the opening procession, sustained applause after his formal acceptance of the role as their shepherd and in waves of applause during the recessional at the end of the two-hour Mass, when some reached out to him and many took pictures with their cellphones.

His message focused primarily on comparing the church now with frightened apostles at sea who had forgotten that Jesus was on the boat with them.

“I know in my heart and I believe you know in your hearts as well: Jesus is in the boat with us” even in turbulent times, he said.

Archbishop Gregory stressed that he didn’t have the answers, nor was there a single ministry or program to solve the current crisis, but he was confident that the church should put its trust in God and God alone.

He urged church leaders to admit their own failures and stressed that for his part he would laugh and cry with members of the archdiocese and would admit faults “when I commit them, not when they are revealed,” which drew applause.

“We begin our journey on unnaturally choppy seas,” he reiterated at the end of his homily and once again reminded the congregation to realize that Jesus has never left them.

The new archbishop of Washington also thanked his family members and those he had served in other dioceses, with a particular shoutout to the Atlanta Archdiocese, noting that he has told them: “There will never be a day when Georgia isn’t on my mind.”

The Mass included petitions in multiple languages, a reading in Spanish, comments and prayers by the archbishop in Spanish and a song by a gospel choir reflecting the diversity of the archdiocese. The archbishop also greeted archdiocesan representatives, holding many of their hands in both of his hands as they spoke to him.

The Mass was attended by more than 3,000 people and was celebrated by eight cardinals, 50 bishops and more than 300 priests.

At the opening of the Mass, Cardinal Donald W. Wuerl, acting administrator of the archdiocese after the pope accepted his resignation last year, welcomed Archbishop Gregory as a “faith-filled pastor” and thanked Pope Francis for selecting him as the new archbishop of Washington. This is a “day we have looked forward to with great anticipation,” he said.

Archbishop Gregory, in his homily, described Cardinal Wuerl as a “true Christian gentleman” and said he “has been and remains a cherished friend.”

Archbishop Christophe Pierre, U.S. papal nuncio, thanked the cardinal for his work shepherding the archdiocese and also said the new archbishop was prepared for his mission of evangelization here.

“Trust your instincts and get out of chancery” to encounter your new archdiocese, the papal nuncio said, reiterating what Archbishop Gregory said on the day of the announcement of his new assignment that he certainly intended to do.

In response to these opening remarks, Archbishop Gregory said he comes to this humble moment with gratitude, joy and confidence, believing that God who has always been with him will continue to be at his side.

The archbishop was welcomed by local Catholics, those from nearby states who wanted to show support and Catholics from the Atlanta Archdiocese wishing him well.

For many in the congregation, the installation of the first African American archbishop of Washington marked a significant moment in history.

Ron Jackson, who grew up in Mississippi and remembers being required to sit in the back pews while attending Mass, sat near the front of the basilica May 21 and said: “To see an African American archbishop be appointed to the archdiocese … it really means a lot.”

“This is a blessed day for me as a lifelong Catholic,” he added.

Jackson, who is the former director of the D.C. Catholic Conference and now works as the senior director of government affairs for Catholic Charities USA, also remembered knocking on doors to register black voters when he was just 16, under the leadership of his pastor.

“But for the church, we wouldn’t have been able to make the gains we did,” he said.

Now, Jackson is looking forward to seeing Archbishop Gregory — whom he has known for about 25 years and always thought was an outstanding leader — shepherd the local church.

“For him to get this assignment is ideal,” he said. “It speaks volumes for his ability to lead and his service to the church,” he told the Catholic Standard, archdiocesan newspaper of Washington.

Veronica Stubbs, a parishioner of Mount Calvary in Forestville, Maryland, and a member of the Knights of Peter Claver, Ladies Auxiliary said it was “an honor and a privilege to be here on this historic occasion,” which she ranked on the same level as when she attended the inauguration of President Barack Obama, the country’s first African American president. In 1963, she also attended the March on Washington.

She believes Archbishop Gregory “is going to be a unifying force for the Archdiocese of Washington.”

Many in the congregation came from Atlanta with mixed feelings about saying goodbye to their leader.

Janise Miller, a parishioner of St. Anthony of Padua Parish in Atlanta, said the archbishop listens to people and is caring and concerned about them. “He takes very seriously his pledge and hope to be a shepherd for the people,” she said, adding: “His gift is bringing people together.”

“I think it is God’s grace and mercy that has brought us to this moment,” said Sister Roberta Fulton, a member of the Sisters of St. Mary of Namur and the president of the National Black Sisters Conference.

Over the years she has known the archbishop, she said, there is “nothing too hard for him to do, because he takes it in a spirit of God has called him to it and he needs to go out and be a disciple. He is a truly humble servant.”

And whenever he accomplishes something, she said, he will tell you it was by God’s grace.

She said he would always say: “God will do things through us that we cannot imagine.”

Contributing to this story was Kelly Sankowski, reporter for the Catholic Standard, newspaper of the Archdiocese of Washington.

NEXT: Patients connect with Catholic medical professionals on internet site