After college at Steubenville, his path opened to priesthood 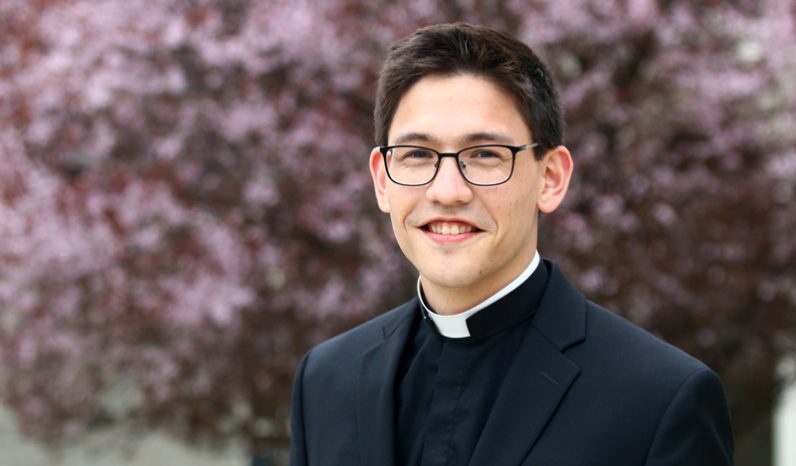 Deacon Anthony Raymundo will be ordained a priest for the Archdiocese of Philadelphia on May 18. (Photo by Sarah Webb)

Anthony Raymundo, who will be ordained a priest by Archbishop Charles Chaput on May 18, didn’t begin his formation at St. Charles Borromeo Seminary.

His first two college years were at Franciscan University in Steubenville, Ohio where its priestly formation program over the past three decades has seen at least 400 young men ultimately enter seminaries and be ordained priests for many dioceses or religious congregations.

Anthony’s life began in California as the eldest of the six children of Dr. Antone and Elizabeth Raymundo. The family relocated to West Chester when he was three and his elementary school years were spent home schooled, in public school and for the final three years at St. Agnes School, West Chester.

From an early age the idea of the priesthood was there, and Anthony’s dad was the first to suggest it simply as one possibility.

During his high school years at Devon Preparatory School Anthony began to seriously discern entering the priesthood. While he was influenced in this by the Piarist Fathers who conduct the school, he decided against that congregation for the simple reason that he did not wish to be a teacher, which was their charism.

Interestingly enough, later at St. Charles Seminary he did have some opportunities to teach and found he rather enjoyed it.

Choosing Franciscan University to begin his undergraduate education made perfect sense under the circumstances. He’d already experienced it through a high school retreat and was considering the priesthood but not absolutely sure that was what God was calling him to do. There was another part of him that leaned toward becoming a husband and father. The university is co-ed and in addition to turning out religious vocations it is also a seed bed for Christian marriages. While it may be too conservative for some it is also unquestionably Catholic and does have a well-respected academic program. 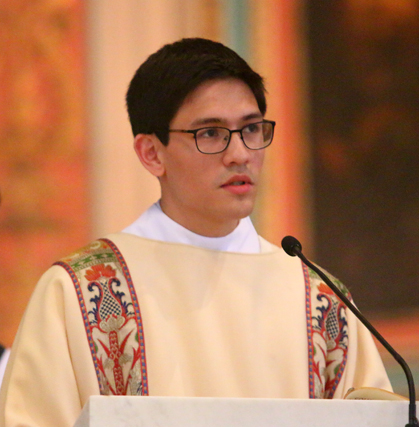 Deacon Anthony Raymundo, proclaiming the Gospel at St. Charles Borromeo Seminary, will be ordained a priest on May 18. (Sarah Webb)

At any rate before the end of his sophomore year at Franciscan, Anthony made up his mind. He would, with God’s help, be a priest and he would apply to St. Charles Borromeo Seminary to study for the Philadelphia Archdiocese. His family took his decision well. If a few members had doubts about the wisdom of it, everyone came around.

“I entered in the fall of 2012 and they accepted all of my credits,” Anthony said.

It probably helped, he guesses, that the academic dean for the seminary at that time was James Growden, a Steubenville grad.

Steubenville may be good at what it does, but it did not have typical seminary rules. At St. Charles it was a whole new life for Anthony, learning to be obedient, learning to follow rules. But there were joys too.

“It changed me as a person,” Anthony said. “Learning how to depend on Jesus. He has to be our first recourse. Other people are fulfilled by a spouse and kids. We are supposed to be fulfilled through Christ, but they are the same vocation.

“You think, ‘How can I be a priest with all of the problems I have?’ There are moments you doubt, but you realize God didn’t create me because of my abilities, he created me because he loves me. He promised to be with us in the Eucharist. You have doubtful moments but good moments too.”

As with the other members of his class, part of the experience was learning to pray especially through the newly instituted 30-day silent retreat. “It kicked my butt but that’s what I needed,” Anthony said.

Of the memories he will take with him is two months spent in Peru immersed in Spanish, a real need for today’s parish priest.

Also there was hands-on parish experience, first at St. Andrew in Newtown and as a transitional deacon this past year at Sacred Heart in Oxford, learning how to be a parish priest under the tutelage of good parish priests.

Now Anthony is preparing to be ordained on May 18. It’s a really big deal for the extended Raymundo family, with relatives flying in from California, Wisconsin, Arizona and goodness knows where else. The next day he will celebrate his first Mass at St. Agnes Church, with Father Joseph Shenosky, the vice rector at St. Charles, preaching.

NEXT: He’s seen the world, but ready to minister in Philadelphia