He’s seen the world, but ready to minister in Philadelphia 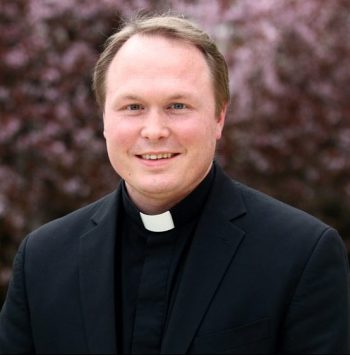 Deacon Jonathan Rice, a member of the Neocatechumenal Way, will be ordained a priest for the Archdiocese of Philadelphia on May 18 at the Cathedral Basilica of SS. Peter and Paul. Sarah Webb)

Jonathan Rice, 32, who will be ordained a priest for the Archdiocese of Philadelphia by Archbishop Charles Chaput on May 18, is like his fellow candidate Francesco D’Amico: a member of the Neocatechumenal Way, a fast-growing movement within the church dedicated to adult faith formation through small, family-oriented parish-based groups.

The Way is rather like the U.S. Navy. If you stay with it long enough you will definitely see the world because active members, not just clergy, can be missioned to spread the Word of God anywhere.

Jonathan is eldest of the seven children (six boys, one girl) of Robert and Mary Elizabeth Rice. He was born in Corning, New York although his mother was originally from Honey Brook in Chester County. The family relocated to Denver, Colorado when he was very young, primarily for his dad’s doctoral studies.

During his early days in Colorado, his parents weren’t really practicing any religion and their marriage was in serious trouble. As matter of fact, on both sides of the family there was a history of broken marriages. Through counseling to save their marriage they somehow came in contact with the Neocatechumenal Way, and it completely changed their lives.

At different times when Jonathan was young, through the Way the family lived at various locations including Colorado and Indiana, and they were even missioned to Philadelphia for a brief period when the Way was first brought to the archdiocese at the invitation of Archbishop Chaput.

Jonathan can’t remember a time from his early childhood that he didn’t want to be a priest, and that persisted through the various cities where his parents were sent to help establish new groups.

“I like to say God gave me a calling before he gave me the use of reason,” Jonathan said. Because of the many relocations his education was variously at public schools, home schooling and Catholic high school.

Participating in the church in his own right from a very young age, he attended World Youth Day in Cologne, Germany in 2005 and went directly from there to spend a year in Israel. During that time he stayed at the Domus Galilaeae, the combination retreat house and formation center conducted for young men of the Neocatechumenal Way who might be considering the priesthood.

As a young adult, “I was originally sent to Georgia and then to Switzerland near Lake Lugano not far from Lake Como,” he said. “I was in mission there for about two years when Archbishop Chaput asked the Neocatechumenal Way for vocations. My rector put my name in, and I was happy to come back to Philadelphia.”

He has been here ever since, and meanwhile, two of his younger brothers have also entered Neocatechumenal Way seminaries. James is in South Africa and Joseph, who entered last year, is in Dallas.

As a seminarian of the Neocatechumenal Way Jonathan has been studying at St. Charles Borromeo Seminary but living at the Redemptorist Mater Seminary, the name given to all of their houses of formation around the world.

While Jonathan’s sense of a religious vocation traces back to early childhood, maturing of course along the way as he grew in understanding, it doesn’t mean there have been no times of trial.

“I was willing to throw in the towel by nature,” he said. “There was always something going on, there were struggles and difficulties, but God worked through them.”

Unlike members of religious orders and congregations, when ordained Jonathan will be a priest fully incardinated into the Philadelphia Archdiocese under the jurisdiction of the archbishop, who will give him his first assignment.

After his ordination Father Rice will celebrate his first Mass on Sunday, May 19 at St. Martin of Tours Church in Philadelphia.

Typically a newly ordained priest asks another priest who has been a mentor or role model to give the homily at that Mass. He can think of a number role models including locally Bishop Edward Deliman, Father Augustus Puleo and Father Martin Cioppi.

But Jonathan doesn’t want a homily that talks about him, so he plans to give it himself. “I want to preach at my first Mass myself,” he said. “It should be all about the people, not about me.” 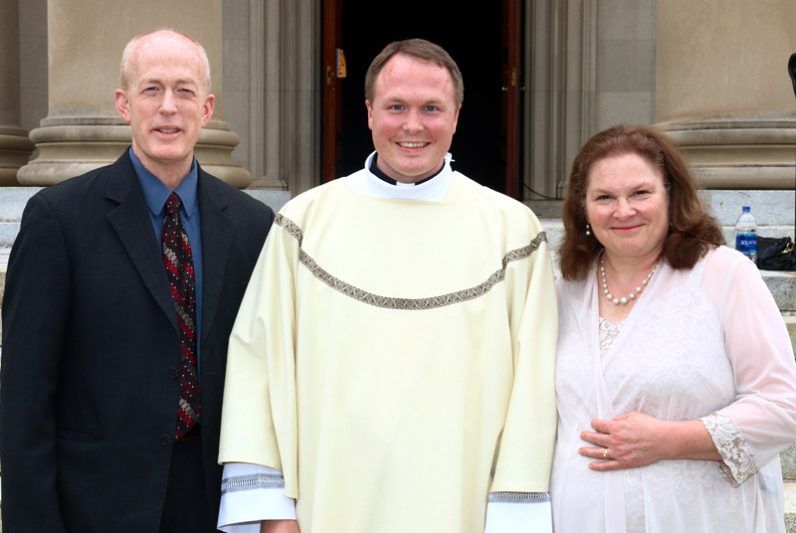 Parents Robert and Mary Elizabeth Rice stand with their son Jonathan at his 2018 ordination as a transitional deacon. (Sarah Webb)

PREVIOUS: After college at Steubenville, his path opened to priesthood

NEXT: Are 3 brothers ready to serve their country in the military? Yes, sir!