Bonner-Prendie girls rally each other, then rally for 13-5 softball win 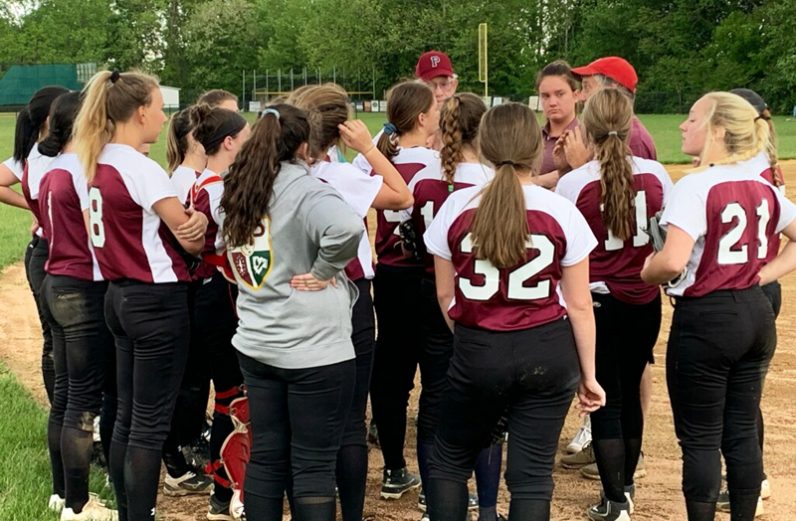 The Bonner-Prendergast team huddles around their coaches after defeating Archbishop Wood, 13-5, in a Catholic League pre-quarterfinal softball game May 15. (Photo by John Knebels)

It won’t be placed in a time capsule as the prettiest win in school history, but Bonner-Prendergast did what was needed.

Taking advantage of numerous miscues while adding seven hits of their own in a pivotal sixth inning, the Pandas upended visiting Archbishop Wood, 13-5, in a pre-quarterfinal game May 15.

“Honestly, I didn’t know if the season was going to end or not,” said Prendie senior Erin Grogan. “I’m glad we came out and got a win.”

Bonner-Prendergast’s victory was the epitome of a team success. Every starter contributed at least one hit, and eight of the nine scored at least one run.

Freshman Jacqlyn Niemiec went 2-2 with two walks and two runs scored while playing flawless third base. Sophomore Madison Thompson was 2-2 with a team-best three runs scored. Junior Mia Falcone was 2-3 with a walk, two runs scored, and two runs batted in. The aforementioned Grogan ripped a two-run single in the first inning and scored a run.

After the game, those four stood side by side representing each of the four classes. They assessed the Pandas’ ability to seize a 5-0 lead in the third, immediately surrender five runs on Wood in the fourth, and then send 12 batters to the plate in an eight-run sixth.

“I feel like our energy today was unmatched,” said Falcone. “Everybody was stepping up to support everyone. Now our energy is all or nothing, basically.  We’re never out of it.”

“We had a rough start earlier in the year,” said Grogan, “but now we are putting it together.”

As younger players, Thompson and Niemiec said there is no division among the veterans and underclassmen. Niemec said she “just fit right in” after feeling a bit overwhelmed after the first game since she was the only starting frosh.

“Everyone is welcoming,” added Thompson. “We all mingle well together. Some are older and some are younger, but we all have something in common.”