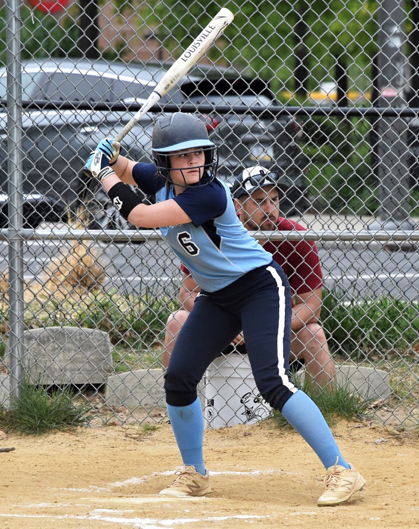 Regardless of when John W. Hallahan’s softball season ends, the first round of the 2019 playoffs will be forever remembered fondly.

With the score tied at 2-2 in the bottom of the seventh on Wednesday, May 15, sophomore Paris Balilonis belted a shot in the left-field gap that scored senior Mia Viola from first base, carrying eight-seed Hallahan to a 3-2 pre-quarterfinal victory over visiting nine-seed Conwell-Egan.

Hallahan will visit top-seed Cardinal O’Hara on Friday, May 17 in a quarterfinal contest.

“She threw me an inside pitch and I knew as soon as it hit my bat that something good was going to happen,” said Balilonis. “It was a great feeling knowing that I helped us advance to the next round.”

Balilonis did not see the clinching tally cross home plate. She sped around first and second and headed toward third. Once there, she was embraced by third-base coach Joanna Hyland and mobbed by her delirious teammates, describing her first-ever walk-off hit as “definitely the highlight of my career.”

Viola, who was on first after junior Sam Burns had singled and been forced at second on a great defensive play by Conwell-Egan, offered the same assessment of scoring the game-winning run in such a huge moment of the season. Unfortunately, no one took video of Hallahan’s third consecutive win and sixth in the last nine games.

“I will forever be able to remember that moment and that feeling,” said Viola, “so that is enough to hold onto.

“I ran as hard as I could. I was so determined to get this win; I wasn’t stopping for anything. When she hit it, I at least knew I was making it to third. As soon as I came around second and saw my coach jumping up and down giving me the sign to go, I knew in that moment that we had won it.”

Hallahan had trailed by 2-1 heading into the sixth. Senior catcher Emma Stokes walked and was replaced by freshman courtesy runner Ava Grady, who advanced to second base. With two outs, freshman Kaitlyn Banning pinch hit.

Defying traditional softball, Banning went after the first pitch and slammed a single to right field, scoring Grady with the tying run.

“It felt amazing seeing my teammates cheering me on,” said Banning. “Seeing her score was awesome. Putting in all that work with my coaches really does pay off.”

Junior pitcher Grace Scally hurled a complete game for the victors, avoiding potential damage in the fifth to preserve a 2-1 deficit.

“Getting out of that and managing to strand a runner at second gave us a chance to win it,” said Hallahan head coach Brian Sitongia. “Our girls did a great job of defending our home field.”

PREVIOUS: Not a doubt: As usual, Nazareth claws back for a big win

NEXT: Bonner-Prendie girls rally each other, then rally for 13-5 softball win