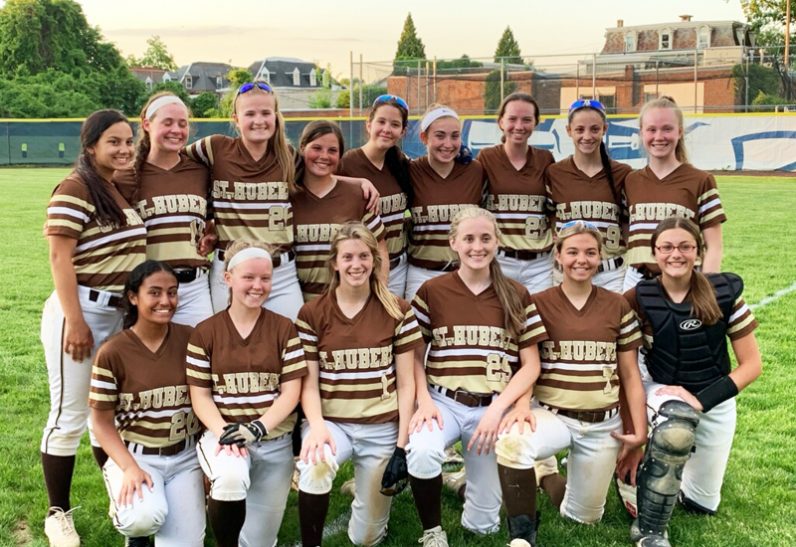 The Bambies of St.Hubert’s celebrate their 8-7 nail-biter win over resilient Lansdale Catholic May 20, earning a trip to the Catholic League softball finals against Cardinal O’Hara May 22. (Photo by John Knebels)

And then there were two.

Cardinal O’Hara and St. Hubert emerged as the Catholic League softball finalists thanks to their victories May 20 at La Salle University, where the two will meet May 22 for the championship.

In the first contest, senior Jenna Smith allowed only five hits and one walk while striking out five in a O’Hara’s 12-0 win over defending champion and four-seed Archbishop Ryan.

“We’ve been playing great ball,” said senior catcher Lexi Galli, one of eight Lions to score a run. “Jenna pitched great, we played good defense, and we really got our hitting together.”

The top-seed Lions finished 11-0 in the league (one game was cancelled because of weather), and they played like an undefeated squad right from the jump.

“We were patient and swung the bat well,” said O’Hara coach Bob Milliken. “We respected Ryan because they are a dangerous team and can score in bunches. We wanted to play a complete game and we did that.”

The second game of the doubleheader was completely different.

St. Hubert trailed Lansdale Catholic 2-0 heading into the fifth and then scored four runs. The three-seed Bambies added two in the sixth and two more in the seventh for a seemingly insurmountable 8-2 lead.

But the two-seed Crusaders batted around in the seventh and produced five runs, helped by junior Paige Paciolla (4-4, two RBI) and sophomore Julia Marozzi (2-4, two RBI. They had the tying run at second base before Hubert senior pitcher Lindsey Davies induced a pop up to third, and the thoroughly relieved Bambies and their fans finally exhaled.

“I’m exhausted,” said Davies, whose two-run single in the seventh proved to be the game winner. “I just wanted to get that final out one way or another.”

Senior third baseman Jordan Frye, among the Catholic League’s leading candidates for Most Valuable Player, slammed a two-run homer over the left-field fence in the sixth inning. She also provided all of the three defensive outs in the seventh — one off a force out, and two on pop ups.

Coming up big in clutch situations has become Frye’s forte. Bound for Jefferson University, Frye took her homer in stride.

“I didn’t have good at bats earlier,” she said, referring to a ground out, fly out and walk. “I just wanted to put a good swing on it.”

Among the game’s most unheralded performers was sophomore Sierra Gozzi. She led off with walk in the fifth, singled in the sixth and singled again in the seventh. Each time, she came around to score.

In the fifth, Gozzi caught a fly ball in center field and fired a strike to sophomore first baseman Emily Murphy for a double play.

“I haven’t had a game like that all year,” said Gozzi. “I have been struggling with my at bats, but my teammates and coaches have been helping me through it and keeping me positive.”

Ironically, the two finalists met each other in a season opener on March 26. O’Hara won, 14-4.

“We are a totally different team now,” said Frye. “This game is really, really important to us.”

PREVIOUS: Bonner-Prendie girls rally each other, then rally for 13-5 softball win

NEXT: CL baseball championship comes into focus for 4 teams