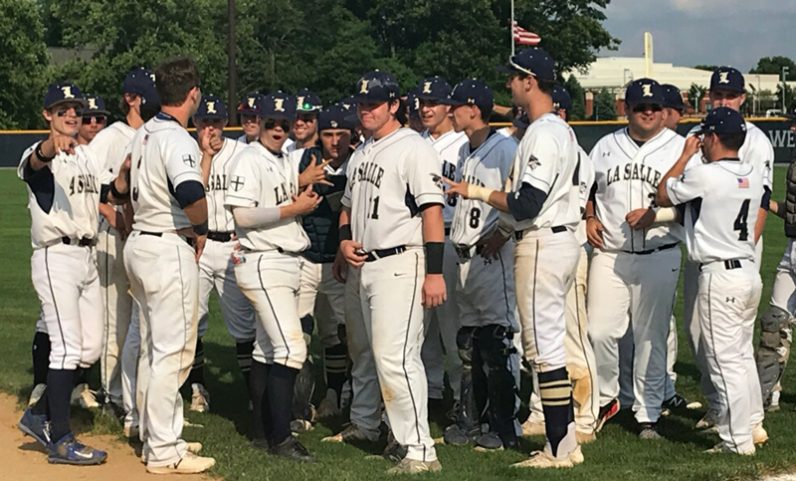 The La Salle High School baseball team looks to repeat the success of its 2018 Catholic League championship season as it begins its run in this year’s playoffs. (File photo by John Knebels)

The top four finishers of the regular season turned out to be the top four in the postseason. Now they will play against one another.

On May 22, La Salle will face Father Judge (4 p.m. at FDR Park) while Roman Catholic will meet Cardinal O’Hara (4 p.m. at La Salle High School). At noon on May 25, the two victors will play for the Catholic League championship at Widener University.

“My slider was working very well throughout the game and I threw the changeup occasionally to keep them off balance,” said La Salle senior Gavin Moretski, who blanked eight-seed Archbishop Ryan, 3-0, surrendering only four hits while notching eight strikeouts. “I just competed the best I could.”

“This was definitely a great win for us,” said Roman Catholic junior Gaetan Grandelli. “It was a very emotional game on both sides especially since we had played them earlier in the week.

“Carroll has a talented group of guys this year, so I knew if we ran into them, it’d be a good game.”

Grandelli sparked the Cahillites by hitting two triples and knocking in three runs. Junior Alex Singer threw four innings and junior Jason Kelly closed the game with the final three. A key defensive play occurred when junior Rob Buckley threw out a runner at third base to help preserve the tenuous lead.

“It was a little disappointing,” said Barcowski. “I wanted to go the whole game, but as long as we won, I was fine.

“At the beginning of the game, I was a little nervous to pitch my first playoff game. My teammates helped calm me down and told me to just do what I’ve been doing all year. I knew I had a great defense behind me and to trust them.”

The Crusaders scored their runs in the first inning.

“After that, I calmed down and I knew all I had to do was just pitch with a lead and trust my defense,” said Barcowski.

Judge junior Shawn LeVan led off with a nine-pitch walk, stole second and advanced to third on a passed ball. Senior Niko Conti also reached base. Both LeVan and Conti scored when senior Drew Sicinski’s grounder resulted in a two-run error.

LeVan had started 0-2 in the count before working the base on balls.

“I was just looking for anything to work the pitcher for the guys behind me to see how their pitcher was throwing,” said LeVan.

Cardinal O’Hara tripped Bonner-Prendergast, 6-5. The Lions seized a 3-0 lead in the third. Ahead by 6-2 after five, O’Hara had to sweat out an aggressive comeback bid by the six-seed Friars, who scored a run in the sixth and two more in the seventh.

Senior pitcher Luke Sprague started and was credited with the win. Junior Tom Kane was strong in middle relief, allowing one unearned run and striking out three in one and two-thirds innings.

On offense, O’Hara seniors Dan Hopkins and Bryan Pazulski knocked in a pair of runs. Junior Joey Sperone was 2-3 with two runs scored. Junior Brendan McGroary also scored twice for the Lions, who outhit the Friars by 12-6.

NEXT: Carroll cruises in 20-6 rout, captures yet another league title