Carroll cruises in 20-6 rout, captures yet another league title 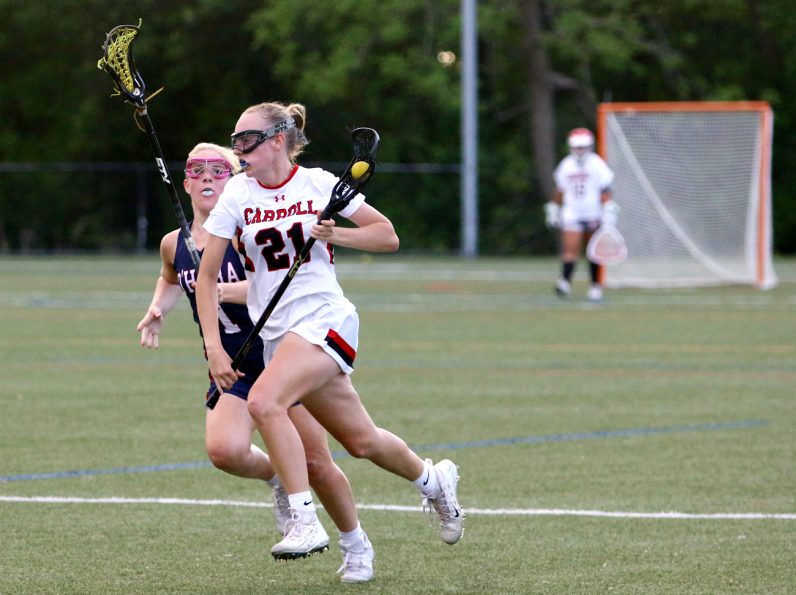 Archbishop Carroll made a habit of attacking the Cardinal O’Hara defense and emerged with a 20-6 and the Catholic League lacrosse championship May 20 at Neumann University. (Photo by Sarah Webb)

Archbishop Carroll captured the Catholic League girls lacrosse championship yet again with a 20-6 rout of Cardinal O’Hara in the title game May 20 at Neumann University.

It was the Patriots’ 19th consecutive league trophy.

“It feels good,” said Kellie Ann Matey who had four goals, one assist and three draw controls. “I can’t wait to take it to the next level as we move on to states.”

Teamwork and hard work did it for Carroll as the team is now just one championship away from sealing it for two decades straight.

“We’re always hungry at practice and we’re always motivating each other,” said Alex Cabahug-Almonte, who finished with four goals and two assists.

Since Lorraine Beers took over as Carroll head coach in 2000 and falling in the finals that year, the Patriots began a streak of Catholic League wins that now stands at 240. Carroll has not dropped a single league decision ever since the 2000 title match.

Although the players wanted to keep this run going, they did not let it interfere with just playing their game as usual.

“We know we have a legacy,” said Keri Daly. “She’s an All-American coach.”

This was not the first time Carroll denied O’Hara in the race for the crown. While Carroll proved that those previous victories were no fluke, the Lions showed improvement all season.

“We’re young,” said head coach Jen Duckenfield. “We played really well. We have to get two halves together in a complete game.”

O’Hara’s Rylie McGowan scored early but it would turn out to be the one and only lead for her team. Cabahug-Almonte responded less than a minute later and a goal by Matey resulted in a permanent advantage for Carroll.

The Lions stayed close for a while. McGowan scored again as did teammate Mia Scarduzio who cut the lead to 4-3 but the Patriots fought back and tri-captain Amber Germer concluded the opening half with a 2-0 sprint, boosting the score to 11-4.

Germer extended her run to 3-0 at the beginning of the new half. Rachel Familetti and Kenzie Raech had a goal apiece to ease some of the pressure for the Lions and it was 12-6. Nevertheless, Carroll prevailed from that point onward.

Tri-captain Madison Kelly accounted for four draw controls, a hat trick as well as an assist. Matey scored twice during the second half. Karli Dougherty (five draw controls, two goals, one assist) scored late in regulation and Cabahug-Almonte registered her last two goals to call it a match.

“It felt really good,” said Cabahug-Almonte. “I think we should work hard until the last second no matter what the score is. The score shouldn’t change how you’re playing.”

While McGowan and Familetti (one assist) paced the O’Hara offense with two goals apiece, Scarduzio and teammate Katie Shallow prevailed in the midfield. Shallow has enjoyed a great rookie season.

Carroll is all ready to begin this year’s PIAA Class AA tournament on Tuesday, May 28, taking on the District One fourth-place team.

“We definitely have a lot more work to do,” said Daly. “I think we worked well together tonight. Hopefully, we can just keep that up.”

O’Hara also returns to the field May 28 taking on the No. 6 seed from District One in the PIAA Class AAA playoffs.

“I feel that the longer we play, the better off we can become,” said Duckenfield. 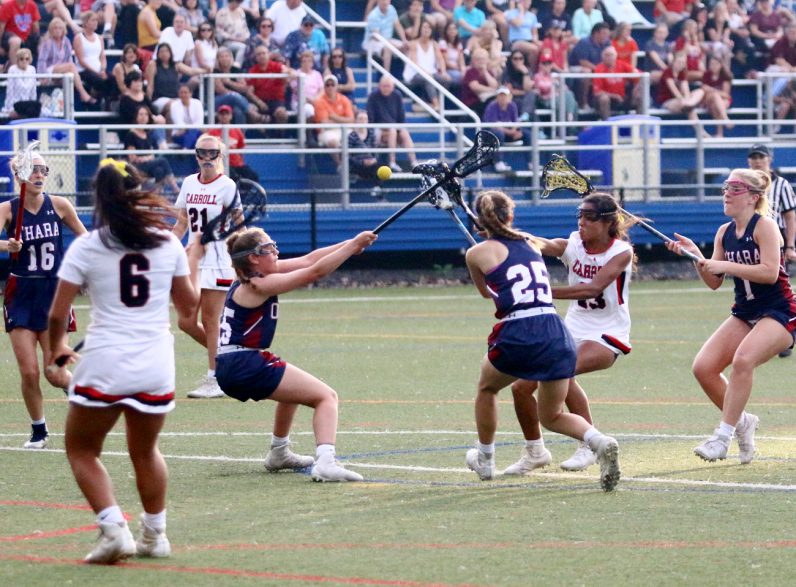 NEXT: High drama: Down but never out, St. Hubert’s finds way to win