High drama: Down but never out, St. Hubert’s finds way to win 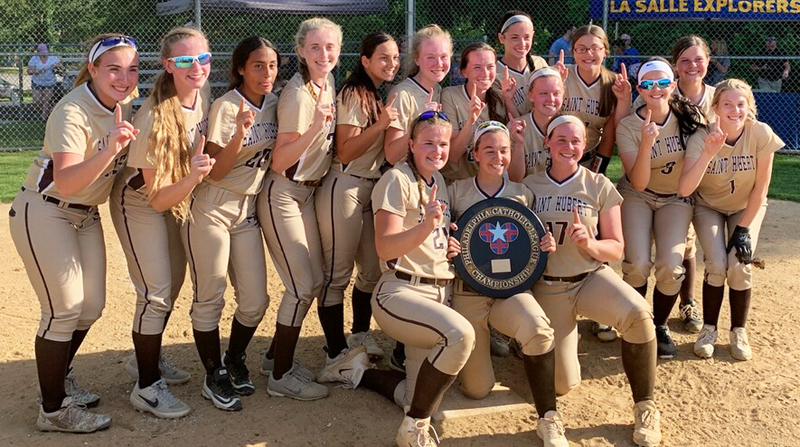 While the ball was in the air for three seconds, heaven received an emergency call.

After the ball fell into Jordan Frye’s outstretched glove, Davies literally fell to her knees and was joined in a three-player embrace along with Frye and shortstop Erin Hogan.

Despite metaphorical windy conditions and a fragmented landscape, those three seniors engineered a season-long circuitous route that began with two brutal losses in the first three games, yet ended with the school’s fifth Catholic League title, all since 2008.

“We started in the gym in November, then we started outside in March,” said Frye, who finished 4-4 with a walk, two singles, a double, an immensely important home run, and three runs scored. “It’s been a lot of work and a lot of time spent into it, and it’s great to come out on top. It feels so good. All that work paid off.” 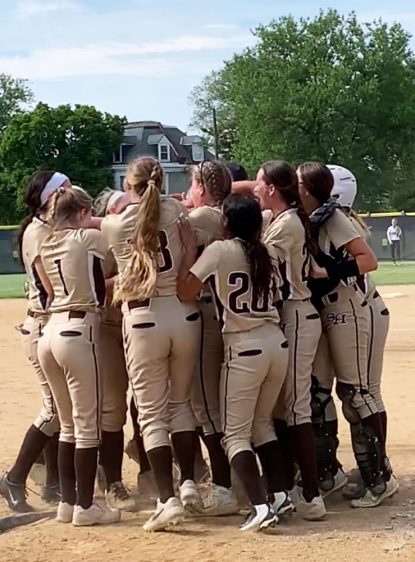 For good measure, Frye caught all three outs of the seventh against LC and the aforementioned snare of the final out versus O’Hara. Ironically, Frye had actually made the last out in the three Hubert’s three previous playoff losses.

“She is probably the best hitter we’ve ever had,” said Don Schafer, who has assisted his brother, head coach Dave Schafer, for a combined 31 years at Bishop Conwell (now Conwell-Egan) and St. Hubert. “She combines singles with a long ball. She has that innate ability to drive a pitch that’s sweet to her a long distance, and she can fight off a pitcher’s pitch and get a single or double out if it.”

Hubert, which trailed by 3-0 after five innings, resurrected in the sixth with four runs via four walks, three singles, and an error. Frye’s homer in the seventh padded the advantage to 5-3, but O’Hara senior Allison Ahern (3-4, 4 RBI) delivered a bases-loaded single to tie the game at 5-5 and send it into extras.

Frye led off the ninth with a double, advanced to third on a perfect bunt by Hogan, and scored on a grounder to shortstop by senior Riley Gorman.

The Bambies became the first team in Catholic League history to lose three games during the regular season and then defeat the same trio in the postseason.

They lost 14-4 to O’Hara on March 26; 6-5 to Archbishop Carroll on April 2; and 6-5 to Lansdale Catholic on April 23. After the loss to LC, they finished the regular season with four shutout victories over playoff teams (Bonner-Prendergast, defending champion Archbishop Ryan, Archbishop Wood, and Conwell-Egan) by a jaw-dropping composite margin of 39-0.

Hubert then beat Carroll in the quarters, Lansdale Catholic in the semis, and O’Hara in the nail-biting final.

Dave Schafer, who earlier this season collected his 500th career coaching victory and has piloted a combined 17 league titles (12 at Conwell and five at Hubert), was near tears after this latest seizing of the prestigious championship plaque.

“We started the year off really down,” he said. “We made a couple of changes. They all bought in to everything that we were doing and they just kept plugging and plugging.

“We took the motto, ‘You don’t want to play us in the playoffs.’ That was our motto going through.”

“I can’t be happier for a group of kids,” he said. “We were an afterthought by most teams and the way we played in the beginning, who wouldn’t have thought that way?”

Then came lots of wins . . . and ultimately, a prayer to The Almighty that was answered in the affirmative.

PREVIOUS: Carroll cruises in 20-6 rout, captures yet another league title