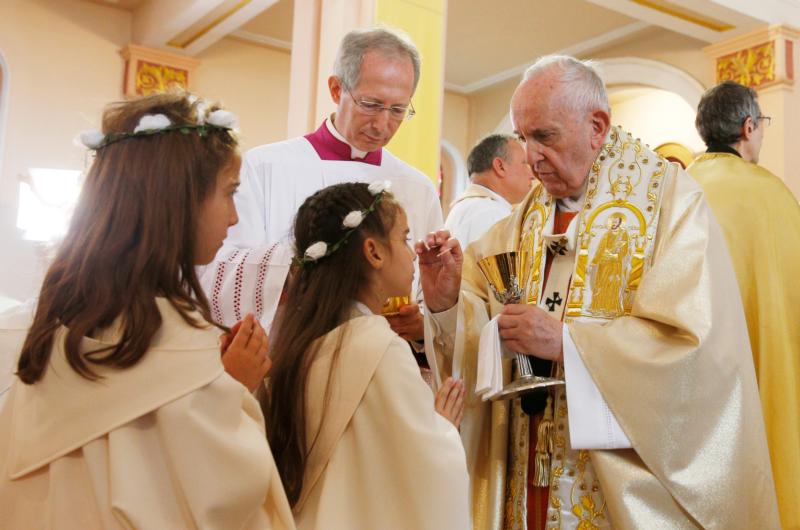 Pope Francis gives first Communion to children during a Mass at the Church of the Sacred Heart in Rakovski, Bulgaria, May 6, 2019. (CNS photo/Paul Haring)

UPDATED – RAKOVSKI, Bulgaria (CNS) — In the Catholic heart of Bulgaria, Pope Francis celebrated a special Mass for 245 children receiving their first Communion and thanked them for helping him, their parents and grandparents remember their own first Communion.

“Today you have made it possible for us to relive that joy and to celebrate Jesus, present in the bread of life,” the pope told the children May 6 in Rakovski’s Church of the Sacred Heart.

While only about 1 percent of Bulgaria’s population is Catholic, in Rakovski the vast majority of the city’s 27,000 people are Catholic.

“Jesus is alive and here with us; that is why we can encounter him today in the Eucharist,” the pope said. “We do not see him with our physical eyes, but we do see him with the eyes of faith.”

After he read his prepared homily, Pope Francis focused on the first communicants, dressed in white robes and seated in the front rows.

“Are you happy to receive your first Communion?” he asked them. “Yes,” the braver ones said out loud. “Are you sure?” the pope asked. “Yes!” they all shouted.

“In the homily I said something I want you to remember forever,” the pope told the children. “I spoke of the ID card of a Christian. I said our ID card is this: God is our father. Jesus is our brother. The church is our family, and we are brothers and sisters. Our law is love.”

To drive the points home, Pope Francis had the children repeat each line after him — or rather, after the translator who was telling the children in Bulgarian what the pope had said in Italian.

At one point, either to test the translator or the children, the pope said, “We are enemies.” When it was about to be repeated, he said, “Are we enemies?” Of course, they shouted, “No.”

After the recitation of the Lord’s Prayer, the pope had more words for the children. “Now you will receive Jesus,” he told them. “Do not let yourselves be distracted; think only of Jesus. Come to the altar to receive Jesus in silence; silence your hearts.”

The pope, dipping the consecrated host in the consecrated wine, personally gave Communion to each of the children, while other priests brought the Eucharist to another 500 people inside the church and an estimated 10,000 people gathered on the church grounds for the Mass.

The Vatican press office said it was the first time on a papal trip that Pope Francis had administered first Communion.

At the Church of St. Michael the Archangel later in the day, Pope Francis urged the region’s Catholics to be bold and creative in handing on the faith to new generations.

“We have to ask how we can translate the love God has for us into concrete and understandable languages for the younger generations,” the pope said.

The key is “finding ways to touch their hearts, to learn about their expectations and to encourage their dreams as a community-family that supports, accompanies and points to the future with hope,” Pope Francis said.

PREVIOUS: Roses and the cross: Pope meets refugees in Bulgaria

NEXT: Honoring St. John XXIII, pope and Bulgarians give witness for peace