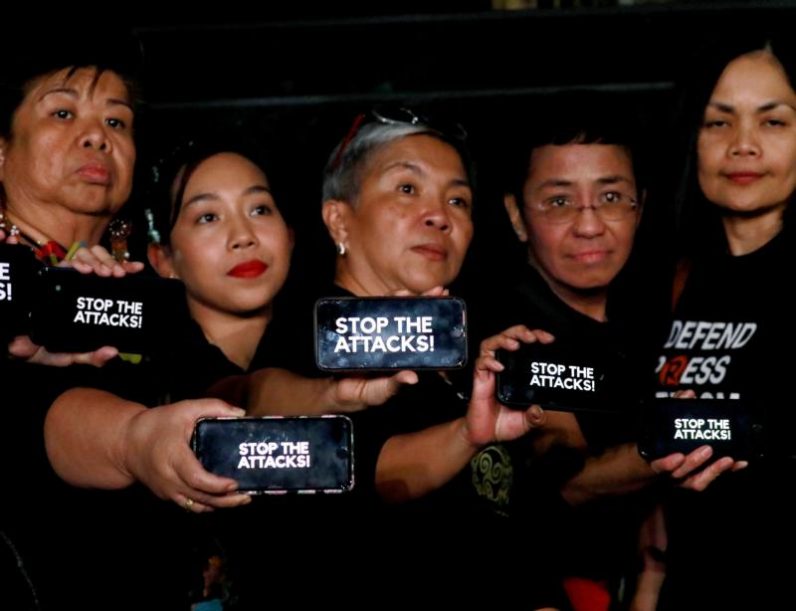 Journalists, including Rappler CEO Maria Ressa, raise their smart phones with words “STOP THE ATTACKS!” in a rally for press freedom in Quezon City, Philippines, Feb. 15, 2019. Church leaders across Asia have expressed alarm over threats to press freedom amid reports of increasing attacks and intimidation of journalists, resulting in growing levels of self-censorship. (CNS photo/Eloisa Lopez, Reuters)

MANILA, Philippines (CNS) — Church leaders across Asia have expressed alarm over threats to press freedom amid reports of increasing attacks and intimidation of journalists, resulting in growing levels of self-censorship.

Media advocacy group Reporters Without Borders said it takes a “lot of courage” to work as a journalist these days amid the threat of censorship, intimidation and even violence.

In its annual World Press Freedom Index covering 180 countries, the organization noted that Asian governments have been using laws to cultivate an atmosphere of fear among journalists, ucanews.com reported.

In the Philippines, where several journalists have been killed in recent years, the reporters group said persecution of media practitioners was accompanied by online harassment campaigns.

“The government is not tolerant of those who criticize it,” said Auxiliary Bishop Broderick Pabillo of Manilla. He said “trolls” have been employed to frighten and threaten people “who express ideas contrary to what the government presents.”

A troll in internet slang is a person who quarrels or upsets people online to distract and sow discord.

Bishop Ruperto Santos of Balanga, head of the Philippine bishops’ Commission on Migrants and Itinerant People, said Philippine press freedom is “under threat and being undermined.”

“There is a tendency and trend to suppress,” he said, calling for vigilance “to protect and promote (press freedom), especially against proliferation, even from higher ups, or fake news.”

Duterte’s government, however, maintained the country remains “the freest if not one of the freest” in the region.

In India, Bishop Salvadore Lobo of Baruipar, who works with the Office for Social Communication of the country’s Catholic bishops’ conference, said journalists face troubling challenges. Even so, he added, they should not be restrained from reporting the truth.

Bishop Henry D’Souza of Bellary, India, of the same office, expressed regret over what he described as “subtle efforts” to erode press freedom in India.

Across the country, violence against journalists has occurred with relative impunity. In 2018, at least six journalists were reported killed while on the job. Overall, more than 70 have been killed in India in the past 24 years.

Attacks against journalists by supporters of the ruling Bharatiya Janata Party also have increased in the run-up to this year’s elections.

In neighboring Bangladesh, Father Augustine Bulbul Rebeiro, secretary of the Social Communication Commission of the bishops’ conference of Bangladesh, said, “freedom of expression is suffering from a culture of self-censorship.”

He said the country’s media are “under indirect but strong pressure” and as a result, journalists play it safe because they also want to “enjoy (the) safety and security of life.”

Bangladesh is ranked 150th in the Press Freedom Index. It cited a crackdown on journalists by the increasingly authoritarian ruling party, the Awami League, which has been in power since 2008.

Since 1992, 21 journalists have been murdered in Bangladesh.

Shakhawat Hossain, president of Dhaka Reporters’ Unity, however, said media freedom in Bangladesh “is much better than India, Pakistan and Sri Lanka.”

“I don’t think press freedom in Bangladesh is bad compared to neighboring countries,” he said, adding that as a journalist, “I can express my opinion or write more or less freely.”

Reporting in Pakistan, especially about religion, has become a “risky business” in recent years.

Iqbal Khattak, director of the media watchdog organization Freedom Network, said “peer pressure” and fear of attacks have resulted in self-imposed censorship among journalists. He cited the case of two journalists in Lahore who sought asylum abroad after reporting on religious minorities.

He told ucanews.com that newsrooms have no policy on covering the rights of minority groups or promoting pluralism.

Father Qaiser Feroz, executive secretary of the Social Communication Commission of the Pakistan bishops’ conference, admitted that freedom of expression in Pakistan is “largely limited.”

“(Journalists) deserve more respect,” he said. He pointed to the need to focus on reporting issues affecting religious minorities.

“Our voices are suppressed especially in news relating to church attacks,” he said.

The World Press Freedom Index reported that Pakistan’s military has stepped up harassing the media, especially prior to last year’s general election.

Attacks on journalists also have risen in the last year in Indonesia, according to the country’s Alliance of Independent Journalists. The organization reported at least 64 attacks in 2018 compared with 60 the previous year.

The incidents included physical assault, beatings, damage to equipment, ban on coverage, threats and charges being filed in court.

Ferdinandus Setu, spokesman of the Church’s Communication and Information Ministry in Jakarta, said one problem facing the Indonesian press is the lack of certification of many journalists.

He urged media agencies and journalists to enhance their capabilities through certification.

NEXT: Early evacuation in India spares more than 1 million from deadly cyclone