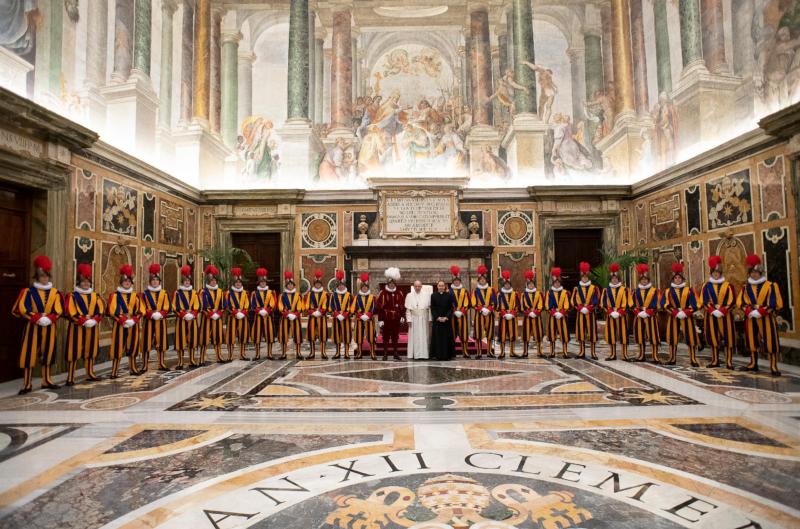 Pope Francis poses with 23 new recruits to the Swiss Guard at the Vatican May 4, 2019. The pope encouraged the new recruits to be holy and a source of encouragement and inspiration to others during their service. The values they learn by living in military barracks, such as understanding diversity, dialogue and loyalty will serve them well in life, he told them. (CNS photo/Vatican Media)

VATICAN CITY (CNS) — Life in a military barracks — with so many different people living in such close proximity — teaches much needed social, spiritual and ethical values, Pope Francis told new recruits to the Swiss Guard.

“Dialogue, loyalty, balanced relationships and understanding” are some of the many qualities needed for living both in the barracks and the outside world, he said in a private audience May 4, welcoming 23 Catholic men from Switzerland who were being sworn in as Swiss Guards May 6.

At the May 4 audience, which included the new recruits’ family members, Pope Francis encouraged the soldiers to be a shining “light” of encouragement and holy people of faith as they live and serve at the Vatican.

“It is necessary to be witnesses and apostles of personal and community renewal because people expect total dedication and holiness from those serving the Vatican,” he said.

He asked that they use their living situation as an important learning opportunity because living in the barracks “teaches some ethical and spiritual principles that reflect many values that are to be followed in life, too.”

“You have been given the possibility to experience moments of joy and inevitable moments of difficulty” that come with communal living, the pope said.

“But, above all, you have the opportunity to create healthy friendships and to practice (experiencing) the unique characteristics and ideas of others, learning to see in the other a brother, a companion with whom to peacefully share the journey,” he said.

“This will help you live in a world with the right approach, recognizing cultural, religious and social diversity as being a human richness and not a threat. This is particularly important in the world we are living in today, like never before, with huge flows of populations and people seeking security and a decent life,” the pope said.

The colorful swearing-in ceremony of new recruits is held May 6 every year to mark the date in 1527 when 147 Swiss Guards lost their lives defending Pope Clement VII in the Sack of Rome. Only 42 guards survived and holding the ceremony on the anniversary is meant to remind new guards of the seriousness of their commitment to “faithfully, loyally and honorably” serve and protect the pontiff and, if necessary, sacrifice their lives for him.

The Swiss soldiers are responsible for guarding all entrances into Vatican City State as well as keeping watch over the pope and his residence in the Domus Sanctae Marthae. They also provide security and ceremonial services during liturgical events and visits of heads of state and other dignitaries to the Vatican.

While traditionally the Guard has been made up of 110 men, Pope Francis recently authorized it to be increased to 135 men, who serve at least 26 months.

The Swiss Guard will be building a new barracks to offer the men improved accommodations and it has been using social media such as Facebook @gsp1506 and YouTube at “Guardia Svizzera Pontificia GSP” to raise awareness about the Guard and attract new candidates.