Bishops express concern about nationalism as EU elections near 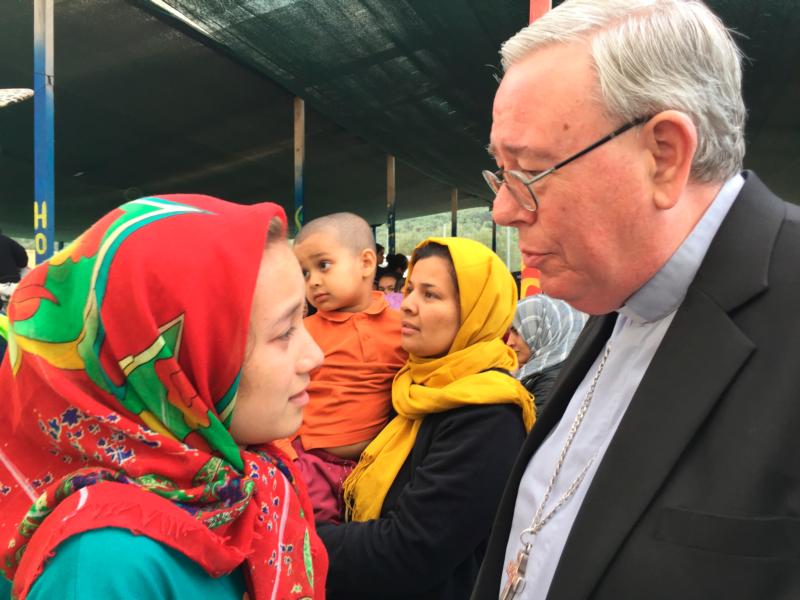 Archbishop Jean-Claude Hollerich of Luxembourg, president of the Commission of the Bishops’ Conferences of the European Union, speaks with a refugee at an activity center for migrants and refugees near Moria on the island of Lesbos, Greece, May 8, 2019. The archbishop urged Catholics to vote for members of the European Parliament who would strengthen the EU’s ability to promote and protect human rights. (CNS photo/Cindy Wooden)

ROME (CNS) — Catholic bishops across Europe encouraged their faithful to go to the polls in late May to elect members of the European Parliament who would promote unity and take seriously the power of the European Union to do good in the world.

Citizens of the 28 countries of the European Union were set to go to the polls May 23-26 to elect more than 700 members to serve five-year terms in the European Parliament.

In the lead up to the voting, Catholic bishops warned of the spread of forms of nationalism and populism that could weaken the EU and the ability of the 28 nations to work together to promote development and to find a shared humanitarian response to the ongoing migration phenomenon.

Archbishop Jean-Claude Hollerich of Luxembourg, president of the Commission of the Bishops’ Conferences of the European Union, told Avvenire, the newspaper of the Italian bishops’ conference, that U.S. strategist Steve Bannon, who has been consulting with European politicians, Russian strategist Aleksandr Dugin and others like them are “priests of a populism” that essentially “negates the essence of Western theology: love of God and love for one’s neighbor.”

Nationalistic populism, the archbishop said, “does not create free communities, but groups who repeat the same slogans and generate new forms of uniformity, which is the precursor of totalitarianism.”

Archbishop Hollerich said the Catholic bishops of the EU countries are worried about strategists and politicians “who want a divided, fragmented, litigious Europe. Instead, we need a Europe that is strong on the international scene” and ready and able to work to promote and protect human rights around the globe.

Cardinal Gualtiero Bassetti, president of the Italian bishops’ conference, spoke about the elections May 21 during the spring meeting of the conference at the Vatican.

“We ask everyone to overcome their reservations and distrust and participate in the vote. We know that this is only the first step, but it is a step that we cannot skip,” the cardinal said.

The weekend before the bishops met, Matteo Salvini, Italy’s deputy prime minister and a hard-liner against migration, shocked bishops and many Catholics when he waved his rosary around at a political rally and told a crowd that he was certain his party would win after he entrusted his life and the country to the immaculate heart of Mary.

Cardinal Bassetti told his fellow bishops that Italy and the EU need real Italian and Christian virtues, including hospitality to migrants; it is not enough to simply “refer to religious traditions and symbols.”

Italians, he said, should work to strengthen the contributions Christianity traditionally has made to Europe: “spirituality and culture, art and social doctrine. Concrete humanism.”

In a formal statement published in late February, the beginning of the election season, members of the EU bishops’ conferences said Catholics should look for parliamentarians with clear ideas of how to build European unity while respecting the diversity of each EU country.

But that diversity, they said, must be built on a common foundation of commitment to helping families and to solidarity with the poor, including through a greater cross-European sharing of responsibility for welcoming and resettling migrants and refugees.

The bishops of Ireland, in a statement May 20, told their faithful that the election is especially important given the ongoing EU negotiations with the United Kingdom for its exit from the union.

“We therefore urge all citizens who can vote in these elections to do so with a particular concern for the common good rather than for local or national interests only,” the bishops said.

Participation in the election, they said, can help strengthen the union’s commitment to its founding values: “respect for human dignity, freedom, democracy, equality, the rule of law and respect for human rights, including the rights of persons belonging to minorities.”

NEXT: Indian court to check if Mumbai prelates failed to take action on abuse