Exclusion of migrants is red flag of society in moral decline, pope says 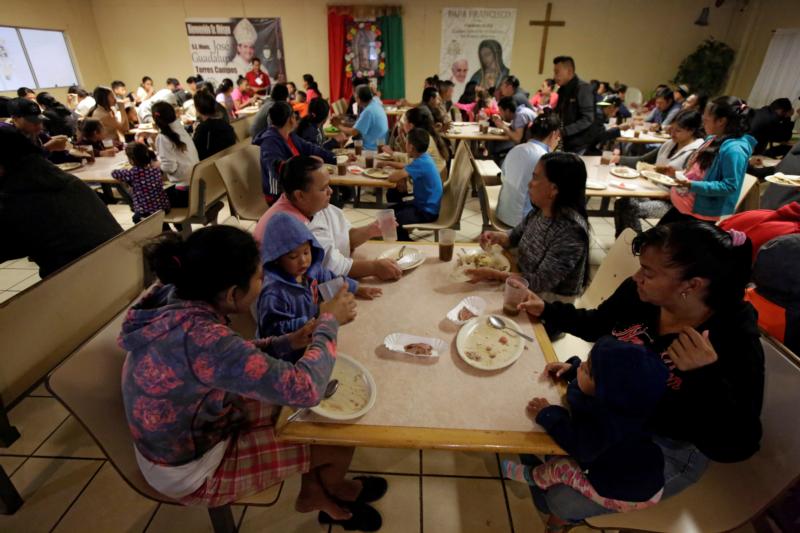 Migrants eat at a Catholic-run shelter in Ciudad Juarez, Mexico, May 10, 2019. Being indifferent to or excluding migrants is a sign of a deteriorating morality that will soon spread and risk marginalizing everyone who fails to fit in, Pope Francis said. (CNS photo/Jose Luis Gonzalez, Reuters)

VATICAN CITY (CNS) — Being indifferent to or excluding migrants is a sign of a deteriorating morality that will soon spread and risk marginalizing everyone who fails to fit in, Pope Francis said.

In fact, the Christian response of welcoming, protecting, promoting and integrating does not apply only to migrants and refugees, but to all vulnerable people living on the “existential peripheries,” he said.

Today’s challenge is not just about migrants, “but about all of us and about the present and future of the human family,” the pope said. Through migrants, refugees and all vulnerable people, “the Lord is calling us to conversion, to be set free from exclusivity, indifference and the throw-away culture,” and embrace more fully an authentic Christian life, building a world “that is more and more in accord with God’s plan.”

The pope made the comments in a message on the theme of “It is not just about migrants” for the World Day for Migrants and Refugees 2019; the text was released at the Vatican May 27 during a news conference.

The Vatican observation of World Day for Migrants and Refugees is Sept. 29, which is also the feast of the archangels Michael, Gabriel and Raphael. In the United States, National Migration Week was celebrated Jan. 6-12.

In his message the pope said, “The most economically advanced societies are witnessing a growing trend toward extreme individualism which, combined with a utilitarian mentality and reinforced by the media, is producing a ‘globalization of indifference.'”

As a consequence, migrants, refugees, displaced persons and victims of trafficking experience exclusion and hardship and are sometimes “considered the source of all society’s ills,” he said.

“That attitude is an alarm bell warning of the moral decline we will face if we continue to give ground to the throw-away culture. In fact, if it continues, anyone who does not fall within the accepted norms of physical, mental and social well-being is at risk of marginalization and exclusion,” the pope warned.

The presence of migrants, refugees and vulnerable people in general, he said, “is an invitation to recover some of those essential dimensions of our Christian existence and our humanity that risk being overlooked in a prosperous society.”

That is why the theme of this year’s message was “It is not just about migrants,” he said, because when people show compassion and concern for migrants, they are also showing compassion and concern “for ourselves, for everyone; in taking care of them, we all grow; in listening to them, we also give voice to a part of ourselves that we may keep hidden because it is not well regarded nowadays.”

At a news conference to present the pope’s message, Jesuit Father Michael Czerny, undersecretary of the Migrants and Refugee Section of the Vatican Dicastery for Promoting Integral Human Development, said “migration is not an unexpected, unprecedented crisis or emergency,” but is a fact of human life.

Therefore, the question people should be asking is, “are governments, businesses, communications and civil society responding competently and responsibly?” as Christians promise to “commit ourselves to welcome, protect, promote and integrate vulnerable people on the move.”

Today’s society and “popular media” instead tend to ignore people on the move, “caricature them, keep them invisible or make them disappear,” Father Czerny said.

Christians refuse rejection and a “me first” mentality, preferring curiosity, concern, compassion and solidarity, he said. “It is not just about migrants,” it is about putting everyone who is in last place first and serving them with love.

In his message, the pope said the indifference and exclusion shown toward migrants and other vulnerable people reflect the fear people feel inside.

“The signs of meanness we see around us heighten our fear of ‘the other,’ the unknown, the marginalized, the foreigner,” he said.

“To some extent, the fear is legitimate, also because the preparation for this encounter is lacking,” he said.

However, that people feel doubt and fear isn’t the problem, Pope Francis said, the problem is when doubt and fear are allowed to “condition our way of thinking” and prompt people to become “intolerant, closed and perhaps — even without realizing it — racist. In this way, fear deprives us of the desire and the ability to encounter the other, the person different from myself; it deprives me of an opportunity to encounter the Lord.”

“It is not just about migrants: it is a question of seeing that no one is excluded,” he said.

“Today’s world is increasingly becoming more elitist and cruel toward the excluded. Developing countries continue to be drained of their best natural and human resources for the benefit of a few privileged markets,” the pope wrote. “Wars only affect some regions of the world, yet weapons of war are produced and sold in other regions which are then unwilling to take in the refugees produced by these conflicts.”

“Those who pay the price are always the little ones, the poor, the most vulnerable, who are prevented from sitting at the table and are left with the ‘crumbs’ of the banquet,” he said.

The church is called to boldly take the initiative, the pope said, and seek those “who have fallen away,” welcome the outcast and promote “real development,” that — unlike today’s which makes the rich richer and the poor poorer — actually includes all people and promotes their integral growth.

“We ourselves need to see, and then to enable others to see, that migrants and refugees do not only represent a problem to be solved, but are brothers and sisters to be welcomed, respected and loved,” he said.

By helping migrants and refugees, he said, people will also be helping build “a more just society, a more perfect democracy, a more united country, a more fraternal world and a more open and evangelical Christian community.”

The Christian response to the challenges posed by migration also applies to all people who are excluded and need to be “welcomed, protected, promoted and integrated,” he said.

If people put those “four verbs” into practice, not only will it help build “the city of God and man,” he said, “we will promote the integral human development of all people” and “we will also help the world community to come closer to the goals of sustainable development that it has set for itself and that, lacking such an approach, will prove difficult to achieve.”

Father Czerny told reporters at the news conference that dioceses around the world are invited to mark World Day of Migrants and Refugees by celebrating a special Eucharist inviting migrants, refugees, survivors of human trafficking and internally displaced persons, along with the organizations which serve them.

“Bishops and faithful of smaller dioceses can join with the archbishop in the larger cathedral. All these special Eucharists in a particular country could be celebrated at the same time in order to give visible expression to the welcome we offer to ‘the stranger’ in Christ and to Christ in the stranger,” he said.

NEXT: Prenatal diagnosis of illness is no excuse for abortion, pope says