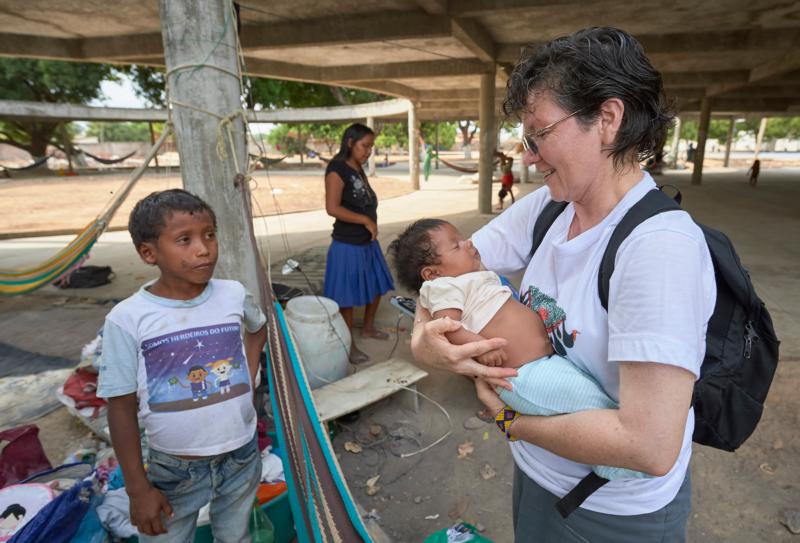 Sister Ines Arciniegas, a Consolata Missionary Sister from Colombia, holds a baby during a visit to Warao indigenous refugees in Boa Vista, Brazil, April 2, 2019. The refugees come from Venezuela, and are living in a park they occupied. (CNS photo/Paul Jeffrey)

PACARAIMA, Brazil (CNS) — The border between Venezuela and Brazil has been closed since Feb. 22, but hundreds of Venezuelan migrants still stream across daily, seeking refuge from a worsening political and economic crisis.

They come from various parts of Venezuela, from the northern coast to the south, traveling only with what they can carry — a suitcase, a backpack, a small child. But they have one thing in common: They are hungry. Some have not eaten for several days.

“People say that at least here (in Brazil) they can get food and medicine and their kids can go to school,” said Sister Ana Maria da Silva, a member of the Sisters of San Jose de Chambery who works in this border town.

Even with the border closed, between 300 and 400 migrants a day cross from Venezuela and line up at the Brazilian government’s Operation Welcome center to apply for asylum or residency. The government also helps with housing, food and transportation to other parts of the country.

But the number of migrants has overwhelmed government services, and Catholic Church organizations, including Caritas and various religious communities, are stepping up to provide vital assistance.

At the government center, rows of large, white tents provide temporary shelter in a place where sweltering heat will soon give way to rain. The tents are divided into rooms, each furnished with bunk beds.

Inside one room, Asia de los Angeles Jimenez, 27, cradled her 18-month-old son, Ismael, who suffers from seizures. Five-year-old Angel David, who has a spinal problem, dozed on a lower bunk.

Jimenez studied education and worked in a school in El Tigre, in northern Venezuela, before making the journey south with her husband and children by bus and on foot. People have treated them well in Brazil, she said, and she hopes her family can stay. 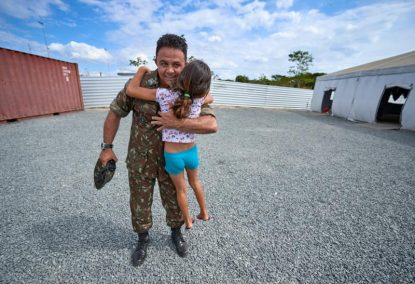 “It’s not easy here,” Sister Ines Arciniegas, a Consolata Missionary Sister from Colombia, warned her as she made a note of the medicine Jimenez needed for Ismael.

Outside, Sister Arciniegas stopped to talk with Yesenia Huarique, 31, who had arrived a week earlier with her 12-year-old daughter, Cris, who has cerebral palsy.

“I came because I was afraid that if I stayed (in Venezuela), she was going to die,” Huarique said.

As Col. Antonio Vamilton Lopez de Franca Filho, coordinator of Operation Welcome, approached the tent, children ran up and greeted him with hugs. Several women said they were surprised to be treated kindly by Brazilian soldiers after being harassed and threatened by military men — or thugs dressed in military uniforms — as they left Venezuela.

Church workers point out, however, that Operation Welcome and the migrant flow also have served as a pretext for Brazilian President Jair Bolsonaro to build up the military on the country’s borders.

That has taken on new significance since April 30, when street protests erupted in Venezuela and rumors swirled that dissident members of that country’s military were seeking to oust Venezuelan President Nicolas Maduro.

Jesuits in Latin America have spoken against any military invasion of Venezuela.

An estimated 3.5 million Venezuelans have left their homeland, and the figure could reach 5 million by the end of this year, Father Pereira de Oliveira said.

When the exodus from Venezuela began, the sheer number of migrants — some 5,000 a day crossing into neighboring countries — took everyone by surprise.

“No country was prepared for that number, and everyone is overwhelmed,” he said.

Colombia has received some 1.2 million Venezuelans and Peru at least 700,000, but the real figures are probably higher. At least 350,000 Venezuelans have migrated to Brazil, although many continue to other countries, especially Argentina.

The next stop after Pacaraima usually is Boa Vista, capital of the state of Roraima, where Sister Arciniegas shares a house with other Consolata Missionary Sisters. Every morning, they and volunteers hand out bread rolls and coffee to more than 600 Venezuelans.

About 4,000 migrants sleep in more than a dozen tent camps in Boa Vista, and several thousand more are on the sidewalks at night. They spend the days on the city’s streets under the blazing sun, seeking odd jobs or trying to organize the next stage of their journey.

“I want to work, but there are no jobs,” said Nerys Mujica, 53, as she sat on the curb outside the Consolata sisters’ house with her 4-year-old granddaughter, eating bread slowly.

Children suffer most from the upheaval, church workers said. While at first most migrants were men, the increased numbers now include many families, some with children with special needs.

Venezuelan youngsters in a Jesuit-run school program for migrant children are often malnourished, and some have not attended school for several years before arriving in Brazil, said Jose Alberto Romero Blanco, coordinator of the Jesuits’ Fe y Alegria (Faith and Joy) school program in Roraima.

The program also offers Portuguese classes for the Spanish-speaking migrants.

Venezuelans cluster daily outside the gate of the Boa Vista diocesan pastoral ministry office, where Caritas manages the “roads of solidarity” program with Scalabrinian sisters, the Jesuits and other diocesan groups.

Some migrants hope they can eventually return home, but others are resigned to starting over again.

Both government policies and the church could do more to help migrants settle into their new country, church workers said. The federal government provides buses to transport people to other cities, where they may have friends or relatives, but there is little coordination with local governments at their destination, said Scalabrinian Sister Valdiza Carvalho.

She and Father Pereira de Oliveira would like to see every Brazilian parish and diocese commit to receiving and resettling several migrant families. Besides providing needed assistance, that kind of contact helps break down discrimination against migrants, which sometimes erupts in violence, they said.

“It is possible, and it doesn’t cost much,” Father Pereira de Oliveira said. “These people come to contribute to the country with their labor. That’s a positive aspect of migration.”

Although Venezuelan migrants confront prejudice, “there are also many stories of solidarity,” he said. “People know that migrants are coming to Brazil, but they don’t know about the conditions in which they are living. When people understand that, their response changes.”