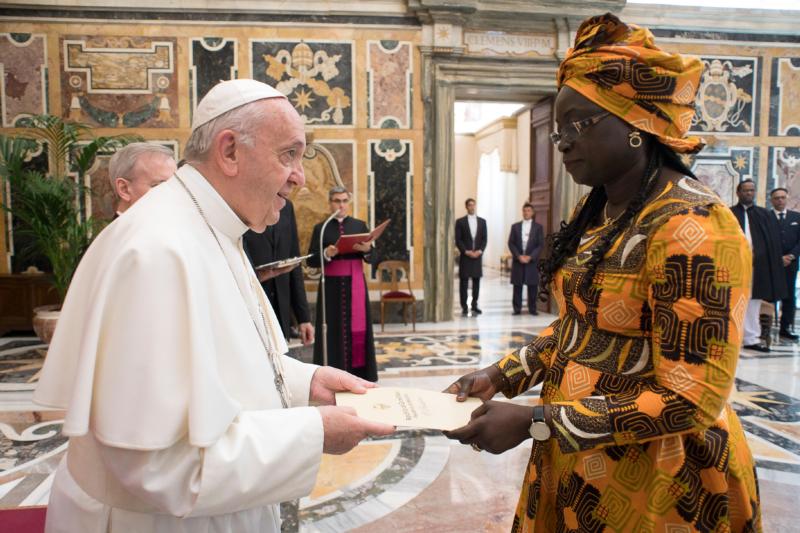 Pope Francis receives letters of credential from Filomena Mendes Mascarenhas Tipote, the new ambassador of Guinea Bissau to the Holy See, during a ceremony May 23, 2019, in the Clementine Hall of the apostolic palace at the Vatican. (CNS photo/Vatican Media)

VATICAN CITY (CNS) — Nations, like individuals, have a “solemn duty” to care for the poor and to work together to promote development, Pope Francis told a group of ambassadors beginning their service at the Vatican.

The nine ambassadors, who presented their letters of credential to Pope Francis May 23, do not reside in Rome, but serve as their country’s representatives to the Vatican while simultaneously holding other posts, mostly as ambassadors to other European nations.

“As we face increasingly complex global challenges,” the pope told them, “it is right to underline the importance of fraternity, for striving together to ensure just and peaceful coexistence is not merely a sociopolitical strategy but is an example of that solidarity which runs deeper than a mutual desire to achieve a shared goal.”

“The pressing need to be attentive to the poorest of our fellow citizens is a solemn duty,” Pope Francis said, and it is “eloquently expressed when, respectful of legitimate diversity, we are united in promoting their integral human development.”

While violence and armed conflict continue to sow death in multiple areas of the world, he said, peace always is possible.

“Conflict resolution and reconciliation are positive signs of the unity that is stronger than division and of the fraternity that is more powerful than hatred,” Pope Francis said.

PREVIOUS: ‘No words to express our shame’: Polish bishops apologize for abuse