Gang murder or environmental crime in killing of Salvadoran priest? 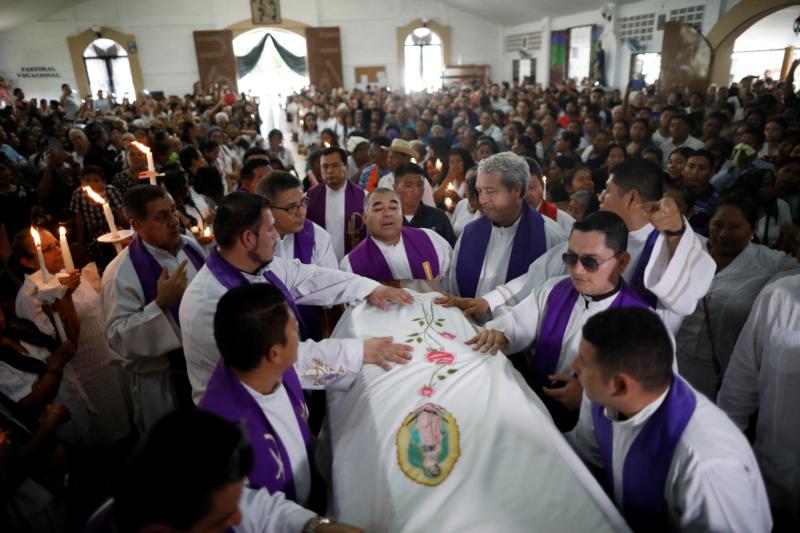 Priests pray over the casket of Father Cecilio Perez Cruz during his funeral Mass in Sonzacate, El Salvador, May 20, 2019. Parishioners found Father Perez dead in his residence in Juayua early May 18 with a note nearby that said he had not paid “rent,” a euphemism for extortion money. (CNS photo/Jose Cabezas, Reuters)

WASHINGTON (CNS) — Many took to social media to denounce the May 18 killing of a Salvadoran priest while urging authorities to look at the crime as a possible retaliation for Father Cecilio Perez Cruz’s criticism of the cutting of trees near the western town of Juayua.

Initially, many characterized the crime as a gang killing because of a reported note found near the body of the 35-year-old priest. The note allegedly said he had not paid “rent,” a euphemism for extortion of money. Members of San Jose La Majada parish, where he was the pastor, reportedly found the priest dead at his residence.

But on Twitter, Father Antonio Rodriguez, known as Padre Tono, a Spanish priest who lives in El Salvador, said he believed that the assassination was a crime perpetrated by those who “traffic” lumber.

“There is a lot of fear, silence and suffering” among defenders of the environment and human rights, Father Rodriguez tweeted in Spanish May 21. “Like the murdered priest, there are many who defend creation and denounce predators who are protected by politicians and greedy and evil entrepreneurs.”

Those perpetrators likely left the note behind to make it look like a gang killing, he suggested in a tweet.

On May 19, Archbishop Jose Luis Escobar Alas of San Salvador said he did not believe the note that spoke of the priest not paying “rent” existed, but did not say why he believed that. However, he agreed that church officials did not believe the killing was related to gangs.

“We believe it’s not true, about that note” found near the body, the archbishop said the day after the killing, according to reports from several Salvadoran media organizations. He also said the priest had never paid extortion money before, nor had been threatened, which typically happens before someone is assassinated by gangs.

In recent times, the Catholic Church in El Salvador has been actively opposing exploitation of natural resources, saying it harms the environment and ultimately affects the health and well-being of the poor. Catholic leaders and large-scale public pressure from members of the church in El Salvador were instrumental in passing a law banning metal mining in 2017, making the small Central American country the first in the world to outlaw the industry.

Many priests also have been outspoken against deforestation near their parishes, and Father Edwin Banos, a priest from the Diocese of Santa Ana, El Salvador, who was a friend of the assassinated priest, told Catholic News Service May 20 that Father Perez was one of them. Father Perez recently “strongly denounced” the cutting of trees near his parish, and that touched the financial interests of high-ranking business leaders, Father Banos told CNS.

Father Estefan Turcios, head of the human rights office for the Archdiocese of San Salvador, told CNS May 21 that it was too early to tell what happened but there is a suspicion among clergy in El Salvador that the priest’s killing is an environmental crime. However, he warned, “it’s only a hypothesis, and there are many.”