In Australia, costs rising in payouts to abuse survivors 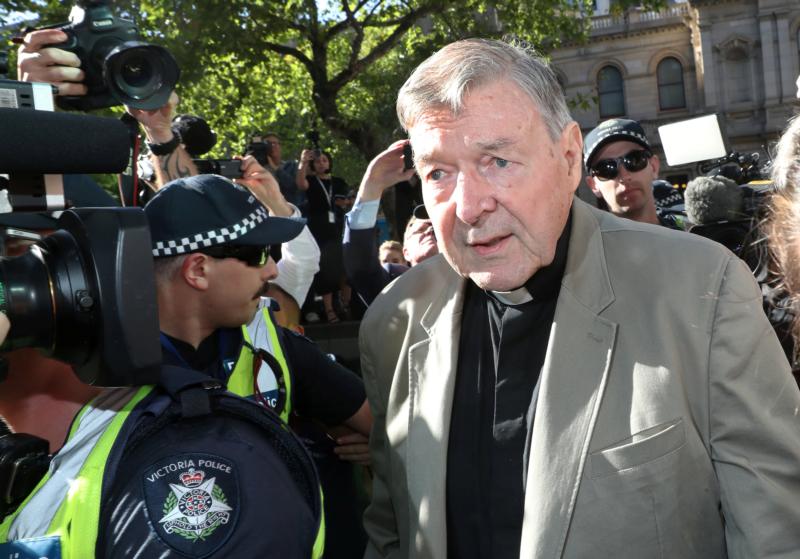 Cardinal George Pell arrives at the County Court in Melbourne, Australia, Feb. 27, 2019. A clergy abuse compensation plan devised by the cardinal in 1996 to pay people who had been sexually abused by clergy was designed to limit financial damage to the church, but the Melbourne Archdiocese has paid an additional $11 million to increase survivors’ claims. (CNS photo/Daniel Pockett, AAP images via Reuters)

MELBOURNE, Australia (CNS) — The Melbourne Archdiocese compensation plan, devised by Cardinal George Pell in 1996 to pay people who had been sexually abused by clergy, was designed to limit financial damage to the church by having survivors sign away their rights to sue the church.

“The archdiocese, without relying on previous releases, has provided additional redress payments totaling $11.07 million based on a cap of $150,000 to 233 survivors of child sexual abuse with claims accepted by the Melbourne Response and who received compensation under previous caps,” said a spokesman for the Melbourne Archdiocese.

But that number could increase. The government of the state of Victoria, of which Melbourne is the capital, is considering following the states of Queensland and Western Australia in providing blanket relief to survivors who have signed so-called releases from liability for the church; such relief allows the survivors to sue for further damages. This would see payouts from the archdiocese climb considerably higher; observers noted that in some other states, such payments have increased one hundred-fold.

When the Melbourne Response was instituted, it was widely seen as onerous and legalistic. It has been run separately from Towards Healing, a plan created by the Australian Catholic Bishops’ Conference and Catholic Religious Australia for the rest of the country’s church.

Both the Melbourne Response and Towards Healing continue to operate, despite last year’s institution of the federal government-run National Redress Scheme in response to the Royal Commission into Institutional Responses into Child Sex Abuse, which operated 2013-2107. The Melbourne Archdiocese — and other dioceses and church groups — may be forced to pay many millions more in compensation as recommendations for changes to the National Redress Scheme are considered by Australia’s newly elected parliament.

The National Redress Scheme is backed by Australia’s six states and two territories and funded by governments, religious and secular organizations, including every Catholic diocese, most religious orders and a raft of Catholic charities, whose clerics, nuns and other officials had been found to be responsible for child sexual abuse.

The Royal Commission recommended a maximum payout of $200,000. The National Redress Scheme currently limits payouts to $150,000, but a parliamentary inquiry has recommended this be changed to $200,000.

The Australian Catholic Bishops’ Conference backed the $200,000 figure in its submission to the parliamentary inquiry.

The Melbourne Response has been estimated to have saved the church $62 million, but its costs have run into multi-millions of dollars, including employing a full-time senior lawyer for more than two decades. Senior laypeople involved with implementing church reforms have called for it and Towards Healing to be shut down in light of the formation of the National Redress Scheme.

The Melbourne spokesman said the archdiocese continues “to receive and deal with claims under the Melbourne Response as well as civil claims and notification of applications to the National Redress Scheme.” He added that individuals wishing to bring claims “appreciate that they have a choice available to them. In relation to claims seeking to set aside past releases, the archdiocese deals with each claim on its merits.”

The parliamentary inquiry’s report, “Getting the National Redress Scheme right: an overdue step towards justice,” also recommended a raft of changes promoted by abuse survivors and support groups related to their primary concerns about long delays in accessing the plan and counseling, the onerous application process that was re-traumatizing survivors, and the simplification of compensation.

A spokesman for the Australian Catholic Bishops’ Conference told Catholic News Service the redress scheme was “an important pathway for survivors of institutional abuse, and we believe it will be an important option for many individuals.” He said others would still wish to pursue civil litigation as their preferred legal avenue of seeking redress.

“Whichever avenue an individual chooses, we are committed to working with survivors to reach some place of healing and justice,” he said. He also added that Towards Healing remained in place and there were no plans to disband it.

As of July 1, 2018, someone wishing to make a complaint that relates to an allegation of sexual abuse of a person who was under 18 at the time of the offense has options: They can report it to the police, which is the preferred option; they can enter the Towards Healing path; or they can make a claim via the National Redress Scheme.

Still, many lawyers are concerned that the National Redress Scheme is being used by institutions guilty of abuse as a cheaper alternative to the Australian justice system.

In a submission to the Parliamentary Inquiry, Melbourne’s Shine Lawyers, a firm that has successfully represented a string of abuse survivors from a range of institutions, said: “We are concerned that institutions are becoming less collaborative and conciliatory, essentially forcing survivors of child sexual abuse through the redress scheme. It has always been the case that the redress scheme ought to be an alternative and not a replacement for civil litigation. Many survivors will be best served by a remedy at civil law.”