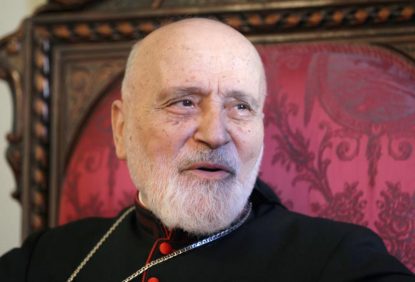 Cardinal Nasrallah P. Sfeir, Lebanon’s retired Maronite Catholic patriarch, known for defending his country’s sovereignty and independence, died May 12, 2019. Cardinal Sfeir, who would have been 99 May 15, is pictured in a 2010 photo. (CNS photo/Nancy Wiechec)

Cardinal Sfeir would have been 99 May 15.

“The Maronite church is orphaned and Lebanon is in mourning,” said a statement from Bkerke, the Maronite patriarchate, announcing his death early May 12.

Cardinal Bechara Rai, Maronite patriarch since 2011, said in his Sunday homily at Bkerke a few hours later, “In this patriarchal chair, where 63 years of continuous life has lived a priest, bishop, patriarch and cardinal, we lose an icon, but we all have gained a patron in heaven.”

In a telegram of condolence released May 14, Pope Francis said that as an “ardent defender of the sovereignty and independence of his country,” Cardinal Sfeir would “remain a great figure in the history of Lebanon.”

Governing the Maronite church with “gentleness and determination,” he was a “free and courageous man” on the public stage, wisely knowing how to bring people together in the name of peace and reconciliation, the pope said in the message to Cardinal Rai.

Cardinal Sfeir served as Maronite patriarch from 1986 to 2011. His last public appearance was at Easter Vigil Mass at Bkerke. He was hospitalized a few days later with a pulmonary infection, his condition later worsening.

The cardinal was considered a respected power broker during Lebanon’s 1975-1990 civil war, which saw bitter infighting between rival militias, including opposing Christian factions.

“The national arena will miss the presence of the patriarch, a man of solid faith in his national positions and in defending Lebanon’s sovereignty and independence at the most difficult stage,” said Lebanese President Michel Aoun.

“The Maronite Church lost one of the most prominent patriarchs who had fingerprints on church affairs, heritage and traditions,” added Aoun, a Maronite Catholic.

Cardinal Sfeir was “a very simple, humble person, always ready to listen,” said Maronite Archbishop Paul Sayah, patriarchal vicar for foreign affairs, of the prelate he had known for more than 30 years.

“He spoke very little and listened a great deal. If you asked him a question, he would answer with a few words, but always deep and down to the point,” the archbishop told Catholic News Service.

The cardinal was a man “who was always open to dialogue, a man of peace and reconciliation,” Archbishop Sayah said.

“He believed very deeply in the Christian-Muslim coexistence. On the other hand, he was very adamant about safeguarding freedom: freedom of conscience, freedom of religion, freedom of speech. One of his famous sayings was, ‘Lebanon could not exist unless it were free,'” Archbishop Sayah said.

In September 2000 Cardinal Sfeir issued, with the Maronite bishops, an appeal for an end to the Syrian occupation of Lebanon, which began during the war in 1976 and lasted until 2005.

“No one dared at that time” to take such a step and “break the taboo” predominating in Lebanon to speak out against the Syrian hegemony, “but he had the courage, the foresight,” Archbishop Sayah said.

For this stand, Cardinal Sfeir was referred to as the father of Lebanon’s second independence.

As patriarch, Cardinal Sfeir often told the faithful that despite the difficulties of current times, their circumstances now were simpler than “the miseries and persecution that befell our people throughout the ages. Our church is a church struggling for excellence.”

He is credited with organizing the 2004 Maronite Synod of Bishops, the first full Maronite synod to take place in Lebanon in 150 years, and the first in which women participated. It resulted in an 800-page document, an extensive study of the identity of the Maronite Catholic Church and its mission in the world.

In his later years, still at the patriarchate, Cardinal Sfeir continued to participate in church activities. He spent his time in prayer, and also reading and writing.

“He had a fantastic habit of writing in his diary every day,” Archbishop Sayah noted, and could be found writing, revising on his laptop at his desk.

“His legacy will remain for a very long time,” Archbishop Sayah said.

“He had that beautiful smile, that really reflected a deep internal peace,” Archbishop Sayah noted, attributing it to the cardinal’s life of intense prayer and meditation. He was even smiling as he was going into the hospital, the archbishop recalled. “I saluted him.”

“We are sad, but we rejoice at the legacy he left us,” Archbishop Sayah said.

Born in 1920 in Rayfoun, Lebanon, Nasrallah Pierre Sfeir was ordained a priest in 1950 and ordained bishop in 1961.

He was appointed cardinal by Pope John Paul II in 1994.

Cardinal Sfeir was fluent in Arabic, French, English, Italian and Latin, as well as Syriac, the historical spiritual language of the Maronites.

Cardinal Sfeir’s funeral will be at Bkerke May 16. The Lebanese government has declared May 15 and 16 as days of national mourning.

His death leaves the College of Cardinals with 221 members, 120 of whom are under 80 and eligible to vote in a conclave.

NEXT: Not ruling on apparitions, pope allows pilgrimages to Medjugorje