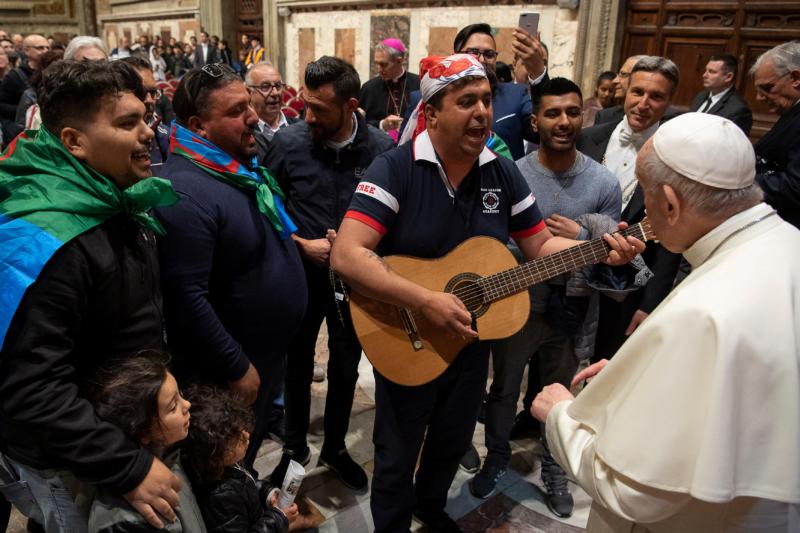 Pope Francis listens to men sing during a meeting with Italy’s Roma, Sinti and Gypsy communities at the Vatican May 9, 2019. (CNS Photo/Vatican Media via Reuters)

VATICAN CITY (CNS) — Members of Italy’s Gypsy communities must look to God to hold on to the hope of a future where they are no longer discriminated against or segregated, Pope Francis said.

Speaking to 500 members of the Roma, Sinti and Gypsy communities during a May 9 prayer service in the Clementine Hall of the Vatican Apostolic Palace, the pope said he was moved by the testimonies of mothers who continue to hold on to the hope they see in their children’s eyes.

During the prayer service, the pope listened to several members of the Gypsy communities, including a priest from the Diocese of Sora-Cassino-Aquino-Pontecorvo, Italy, located roughly 75 miles south of Rome.

“Yes, I am a Roma priest! A Gypsy that becomes a priest always makes news and is considered different and peculiar,” Father Cristian Di Silvio told Pope Francis.

Father Di Silvio told the pope that while completing his studies, he faced discrimination, even in the seminary.

“I remember when I would talk to my companions in the seminary, the first thing they would ask me was whether I lived in a trailer, if I begged for alms and if my family would rob wallets at (Rome’s) Termini station,” the priest said.

Nevertheless, through the help of his spiritual adviser, Father Di Silvio said he learned that his Gypsy heritage did not make him different from any other Christian who is “unique and unparalleled.”

Three mothers — Dzemila, Miriana and Negiba — also spoke of the hardships of raising their families in neighborhoods or camps “segregated from communal institutions.”

Addressing the pope, one of the mothers said that in Italy today, finding a job that assures one’s dignity is difficult, especially “if you are a Roma woman.”

“Hateful speeches, and even violent actions against our community are constantly rising, and this is, for us, a source of deep concern,” she said.

Despite the circumstances, the young woman said, the members of the Roma, Sinti and other Gypsy communities dream and hope for “a reawakening of humanity in Italy.”

“It is the same hope that we read in the eyes of our children every day and that your words, Your Holiness, have always given us in these years and that has helped us to believe in a country that is more human, more just and more caring,” she told the pope.

“Mothers who read hope in their children’s eyes struggle every day for concreteness, not for abstract things,” Pope Francis said. “And even mothers — I dare say — are hope. A woman who gives birth to a child is hope, she sows hope, she is able to make her way, to create horizons, to give hope.”

Recalling the testimony given by Father Di Silvio, the pope said hearing people talk about others with adjectives “makes me angry.”

“This destroys, because it does not let the person come through,” he said. “We cannot say: They are like that, they are ugly, they are good, they are bad. Adjectives are one of the things that create distances between the mind and the heart.”

Pope Francis offered the Gypsy communities a word of encouragement, urging them “to look upward” when difficulties are ahead because there, they will find that God “is looking back at us.”

“There is one who looks at your first, who loves you. One who lived on the sidelines as a child to save his life, hidden as a refugee. One who suffered for you, who gave his life on the cross,” the pope said. “He is the one who goes looking for you to console you and encourage you to move forward.”

NEXT: Some Quebec bishops uneasy with pro-life leader’s anti-Francis stance