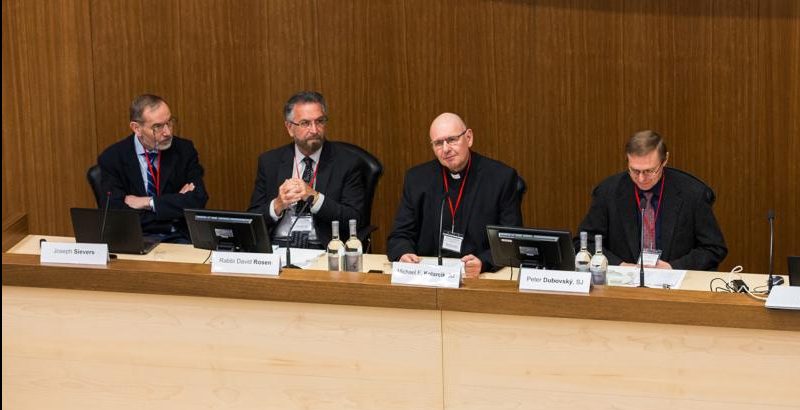 VATICAN CITY (CNS) — When Pope Francis wants to warn Christians against falling into the trap of rigidity and putting too much emphasis on adherence to the law above the merciful encounter with God, he often turns to the example of the Pharisees.

The Pharisees “don’t go speak with sinners, they don’t visit tax collectors, they don’t go because (they think), ‘Better not get tarnished by these people, it’s a risk,'” the pope said in one example, from a homily last November during morning Mass at Domus Sanctae Marthae.

“They are incapable of forgiving, of being merciful, of receiving,” he added. “They choose the opposite of Jesus.”

In fact, for many men and women, especially Christians, the term “Pharisee” conjures up images of the scribes and doctors of the law who plotted against Christ and followed the letter — but not the heart — of the law.

However, a number of scholars and experts are concerned, that these figures — while based on biblical accounts — can often be misunderstood or used as a pretense for prejudice, bigotry and offenses against Jews.

To study this dilemma, Rome’s Pontifical Biblical Institute sponsored at the Pontifical Gregorian University a May 7-9 conference, titled “Jesus and the Pharisees: An Interdisciplinary Reappraisal.”

Notable Christian and Jewish scholars, organizers and participants were hoping greater knowledge about biblical interpretations and the role that Pharisees actually played, especially those who were followers of Jesus, could lead to a use of the term that is more consistent with historical fact rather than a broad brush for negative stereotypes.

The conference’s opening session noted that the use of the word “Pharisee” as a metaphor for hypocrisy is not only an issue within the Catholic Church, but also in other Christian churches and even the U.S. political sphere, as evidenced by Democratic candidate Pete Buttigieg’s use of the word to describe U.S. Vice President Mike Pence and members of the Republican Party.

“It’s important to understand how we should use language today and not in a manner that is offensive,” Rabbi David Rosen, international director of the American Jewish Committee’s department of interreligious affairs, told Catholic News Service May 7.

Many Christians, he said, “don’t realize that for most Jews today, Pharisees are who we think we are. We are descended from the Pharisees; that’s Rabbinic tradition! And so, if you use the word ‘Pharisees’ pejoratively, it’s insulting to Jews.”

However, Rabbi Rosen told CNS that it is clear that despite Pope Francis’ negative assessment of Pharisees in his homilies, “everybody knows he is a friend of the Jewish community” and he is in no way “insensitive to Jewish sensibilities.”

The rabbi explained that it’s clear that the pope is referring to a small group and is not making a general accusation against the Jews or the Pharisees.

Father Joseph Sievers, a professor at the Biblical Institute, told CNS that “language is sometimes very tricky” and that the pope is highlighting this specific group in the Bible to help Christians understand what their attitude and relationship toward mercy and the law should be.

“He uses the word ‘Pharisee’ without thinking of the ancient Pharisees and without making that connection, which for others — for Jews — are very present,” he said.

“The problem is not so much the pope,” Rabbi Rosen said, “The problem is a priest — let’s say in Bogota — who says, ‘Hey, the pope speaks like that about the Jews and the Pharisees, why shouldn’t I?’ And that’s where we need to encourage a little greater sensitivity and understanding the dangers of not qualifying your language when you use it in sermons and homilies.”

Pope Francis acknowledged that negative perceptions of the Pharisees throughout history had often been made “without concrete basis in the Gospel accounts.”

The pope met with conference participants May 9 and instead of delivering his speech, chose to greet each person individually.

In his prepared remarks, the pope said that contrary to negative interpretations, “Jesus and the Pharisees must have had much in common.” He also noted that the New Testament offers examples where Jesus had “numerous discussions with Pharisees about common concerns” and “accepted other aspects of their interpretation of the Torah.”

Jesus, he added, shared their belief in the resurrection and “accepted other aspects of their interpretation of the Torah.” The pope also noted that some Pharisees themselves followed Jesus and one defended Peter and John when they were questioned by the high priests about their preaching.

Homilies and preaching that accurately portrays the Pharisees and differentiates those who helped Jesus from those who opposed him was one of several themes the conference was discussing.

Among the scholars invited were Amy-Jill Levine, a Jewish New Testament scholar from Vanderbilt University and visiting professor at the Biblical Institute where she teaches a course on the parables of Jesus. She was also named April 30 as member of the editorial board for L’Osservatore Romano’s “Women-Church-World,” the women’s magazine for the Vatican newspaper.

Levine told CNS that as a scholar, “I’m interested in how the data we learned from this conference can help us in things like preaching, formulating perhaps a revised lectionary, eliminating the connection between the negative use of Pharisees and negative use of Jews (and) seeing how bigotry takes shape over time and how that bigotry is attached to a particular group of people but then extends out.”

As the first Jewish scholar to teach in the field of New Testament at the Biblical Institute, Levine highlighted the importance of helping priests, especially those who study her course on parables, on how to correctly interpret the biblical passages describing the actions of some Pharisees.

“My students are terrific,” she told CNS. “I say to them, ‘You have preached on this material, what have you said? And then on the basis of what we have studied in this class, what might you say now that might give you a better homily or a better message, for example, in the parable of the Pharisee and the tax collector?'”