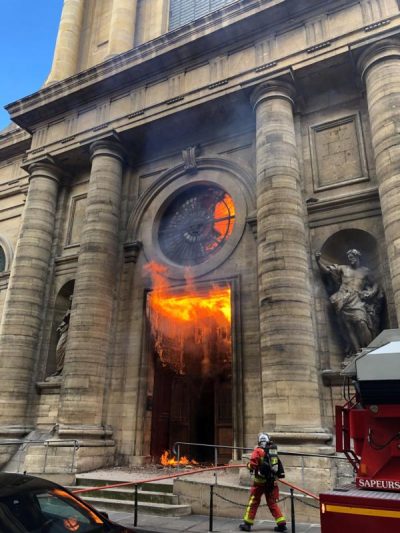 The cases were logged by the Vienna-based Observatory of Intolerance and Discrimination Against Christians in Europe, an independent organization founded with the help of the Council of European Bishops’ Conferences. Details of each of them have been posted on the observatory’s website.

Police in Freiburg, Germany, are investigating a series of thefts from Catholic churches in Rheinfelden-Nollingen, Schworstadt, and Bad Sackingen from mid-April to the beginning of May. The Nollingen church was hit twice by thieves.

In early May, vandals defaced a wall of the Herz-Jesu Catholic church in Winnweiler with graffiti; the Evangelical Lutheran City Church in Rudolstadt was daubed with paint, and a paving stone was thrown through the window of a chapel in in Morbach-Hoxel, causing 2000 euros (US$2,200) of damage.

At least nine windows were smashed at a church in Wilhelmshaven, a fire was started at a church in Nienborg, and terror threats were made against churches marking the Armenian genocide in Stuttgart and Frankfurt, causing the events to be canceled.

The Observatory of Intolerance and Discrimination Against Christians in Europe also reported continued attacks on churches in France, despite the national outpouring of grief that followed the fire that devastated Notre Dame Cathedral April 15.

Since the blaze, a statue of the Virgin Mary was decapitated in the village of Marlhes, and a statue of St. Barbe, the patron of firefighters, was removed from a glass case outside a church in Belle-Roche and smashed.

From February to March, at least 10 other churches in France had been hit, with some set on fire while others were severely desecrated or damaged.

In early May, vandals repeatedly targeted an Anglican church in Copthorne, England, while in late April in Glasgow, Scotland, two Catholic churches were targeted by vandals. Anti-Catholic slogans were painted on a bus stop outside of Holy Family Church and vandals entered the sanctuary of St. Simon’s Church, smashing a statue of the Sacred Heart of Jesus and overturning a Marian shrine.

The Archdiocese of Glasgow condemned the vandalism at St. Simon’s via Twitter April 30, saying, “Let’s find those responsible and send out the message loud and clear that this kind of action is unacceptable.”

NEXT: Jesus is always ready to help free people from evil, pope says