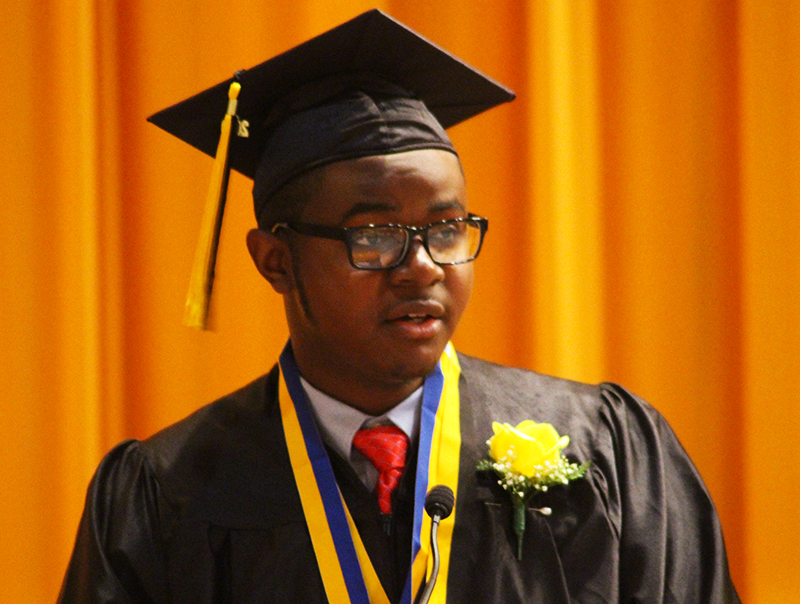 Thirteen students turned their tassels during a June 14 graduation ceremony at De La Salle Vocational School, the day treatment center of St. Gabriel’s System in the Archdiocese of Philadelphia.

“This is a day I’ve been waiting for a long time,” said Angela Wall, whose son Duane Price was named class salutatorian.

In his speech, Price quoted a poem written by his mother, in which she encouraged him to “see his face in this time and space,” and to believe that he could achieve his goals by embracing the opportunities of the present moment.

Price recalled that his teachers’ consistent, compassionate instruction enabled him to overcome the challenges he had encountered upon his arrival at the school.

“They told me that all I had to do was keep doing my best, and I would master the skills in no time,” he said. “Once I heard that, tears came to my eyes. And since that day, I have always put 100 percent effort into my work.”

Price earned a certificate in culinary arts, passing the manager’s exam for ServSafe, the nation’s leading food safety association. While the choice of specialization was a natural for Price (his father Timothy is a chef), he ultimately has his sights set on law school, which he plans to enter after completing his degree at Community College of Philadelphia.

In addition to academic and technical knowledge, De La Salle imparts life skills that enable students to reshape their future. Like all of CSS’s youth services agencies, the school has developed a trauma-informed approach to its clients, seeking to address the core reasons why youth engage in at-risk behavior. Staff focus on fostering communication skills, emotional intelligence, non-violence and a sense of social responsibility among students.

Price cited the work of instructor and counselor Fred Trainer as pivotal to his progress in this regard.

Trainer, who moderates conflict resolution and peer counselor groups at the school, uses a holistic, interdisciplinary approach that enables students to “connect to their inner selves and figure out what is causing them to commit certain actions,” said Price.

As part of this outreach, Trainer arranges for De La Salle students share their personal stories in classrooms throughout the Philadelphia area, and at the Philadelphia Police Department’s training academy. Price’s enthusiastic participation in this program — which included visits to three colleges and 20 schools, plus three sessions at the police academy – earned him the De La Salle Vocational Community Service Award.

“In telling his story, he assumed the role of teacher,” said Charles “Skip” Gaus, director of De La Salle Vocational. “Duane used his personal narrative to reach out, in a spirit of humility and openness, and be his brother’s keeper.”

Gaus also presented Price with the school’s general excellence award for academic performance. Since July 2017, Price earned 21.5 credits after transferring to De La Salle from the St. Francis -St.Joseph and St. Vincent Homes. Operated by CSS, the homes — which are certified by the internationally recognized Council on Accreditation for human service agencies — offer residential and educational programs, as well as case management and outpatient clinical services, for more than 100 dependent and delinquent teens.

Fellow classmate Jamil Johnson earned the school’s attendance award, with commendations from his teachers for his interpersonal and communications skills.

The presentations and speeches at the June 14 ceremony were punctuated by cheers and tears of joy from some 100 family members, friends and staff who had gathered in the school’s auditorium.

As graduates received their diplomas, several parents echoed the words of Timothy Price.

“That’s my son,” he said, as Duane posed for a photo with his diploma. 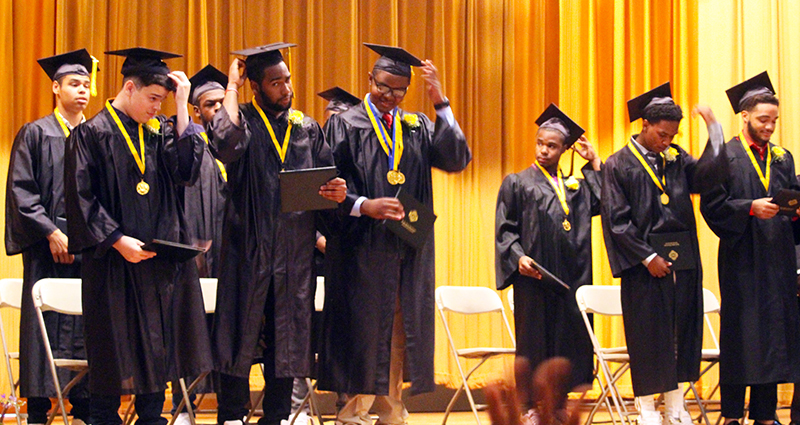