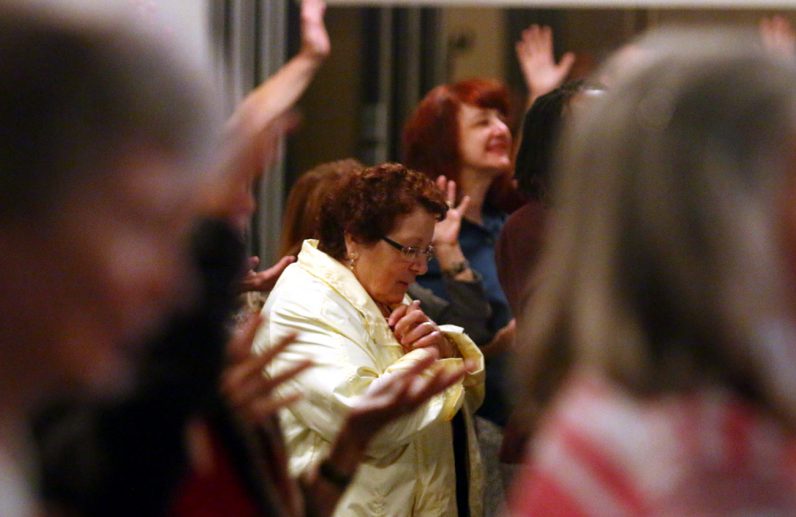 They describe themselves as “the best kept secret in Philadelphia:” dozens of small groups meeting on Tuesday and Thursday nights across the archdiocese, gathering in Catholic churches and school meeting spaces to utter prophecies, sing together, cry out for healing and pray over one another.

They are members of the Catholic Charismatic Renewal (CCR), and they are on fire with the Holy Spirit.

“The Renewal is really a refocusing of your life on the manifest love of God — the Third Person of the Trinity,” said Deacon Lyle Benner, longtime leader of a weekly prayer meeting at St. Agnes Parish in Sellersville. “It is an individual and personal experience of inviting him into the center of your life.”

The term Charismatic here does not refer to the common definition of the word, that of having a strong or forceful personality, but rather the seven gifts — from the Greek charismata — of the Holy Spirit. Charismatic Catholics remain grounded in a faithful love of the Eucharist, the Blessed Mother and the church, while utilizing what they call the “continuing gifts” of the Holy Spirit in the present day: healing, prophecy and tongues.

“The Renewal is the only lay movement founded by the Third Person of the Trinity, the Holy Spirit himself,” said Gloria Coyne, the archdiocesan liaison to the Catholic Charismatic Renewal.

There are groups in more than 230 countries in the world, with over 160 million members worldwide; Philadelphia is home to 65 groups (on record) across dozens of parishes. Founded in 1967 by a group of students and professors at Duquesne University, the Catholic Charismatic Renewal most recently celebrated its golden jubilee as a movement in 2017.

Members speak of “being baptized in the Spirit,” which refers to the moment they invited the Holy Spirit into their lives — a personal moment they believe connects them to God and brings them to a new way of life.

“‘Baptism in the Spirit’ for us is not a sacrament, but it is a moment of surrender. We tell God to move in us and in our lives in a way of complete submission. But then we begin to look for him and the way he moves in our lives and to be open to it,” says Deacon Benner.

Members sometimes describe this moment as being an “unlocking” of the gifts given by the Holy Spirit at confirmation.

Paul Hayes of St. Katharine of Siena Parish in Wayne has been attending a prayer group there since its founding in 1987. “I asked the Lord one night sometime in the early ‘80s, ‘Is this all there is?’ Forty-five minutes a week at Mass? But he had other plans for me,” Hayes said.

“You forge a community together, bonded in the Spirit. Together you learn to lean on one another and use and discern the gifts given to you by our Lord as the disciples did at Pentecost.”

Hayes says the movement taught him to rely entirely on God in his personal life, and pray more deeply — and every day.

“That was the watershed moment, you know. Before Pentecost, they were afraid and unable to do anything. But with the Spirit, they went out and made disciples of all nations, cast out demons and healed the sick,” Hayes said.

Members emphasize a more personal, experiential connection to their faith, and a sense of “serving the Lord with gladness.” As such, a central part of Charismatic practice is “praise and worship” prayer groups that are often (but not always) lay-led, which gather outside of weekly Mass times.

“It’s not a cookie-cutter situation,” said Coyne. “A lot can happen at prayer meetings: prophecies, healings, speaking in tongues. Many times people will give testimony to how God has spoken to them in their lives. The leader will feel out how to direct a meeting, but often it is responsive to how the group comes together.”

Prayer groups — often 10 or 12 people, but sometimes as many as 20 to 25 — will pray over those in need of healing and call down God’s Spirit on them. They will speak in tongues.

Some even “rest in the spirit,” which happens when worshipers are so overwhelmed with their experience that they faint or their legs give way and they lose consciousness.

Critics of the Renewal sometimes cast an eye of suspicion of charismatic worship practices as evangelical Protestant imports, which they say distract from the focus on the sacrifice of the Mass and the presence of Christ in the Eucharist and focus too much on the sense of an individual’s feelings.

“How do you know when the Spirit comes upon you?” asks Deacon Benner. “Scripture tells us, of course: you will know by whether your actions glorify Jesus as Lord. Whom does this glorify? Is it me? Or is it Jesus?”

“There is still quite a lot of misunderstanding from the outside,” said Coyne. “But charismatics say the rosary. We focus on adoration in many of our meetings. Many of our leaders are in fact priests and deacons, not just lay people.”

Popes too, have been widely supportive of the CCR: in fact, Coyne will be spending Pentecost as the Philadelphia delegate to the international gathering of the CCR worldwide, known as CHARIS, in Rome with Pope Francis this coming weekend, June 8-9, the feast of Pentecost.

There was also an international prayer meeting at the Wells Fargo Center in Philadelphia, funded entirely by donors in the movement, during the World Meeting of Families in 2015 that gathered together 2,500 participants for healings, prayer and witness.

As to these practices being characterized as “Protestant,” Coyne laughs. “We had Pentecost first, when you think about it,” she said. “These are ancient Christian practices that belong to the heritage of the whole church.”

“We’re in the deep waters of the faith,” added Hayes. “We ask God: ‘If there is more to you, we want more.’ And we surrender to it.”

For the third year running, groups from around the Philadelphia Archdiocese will unite at a bilingual vigil Mass for Pentecost at the Cathedral Basilica of SS. Peter and Paul on 18th street and the Benjamin Franklin Parkway. Father G. Dennis Gill, rector of the cathedral, will preside. Praise and worship begins at 7 p.m.