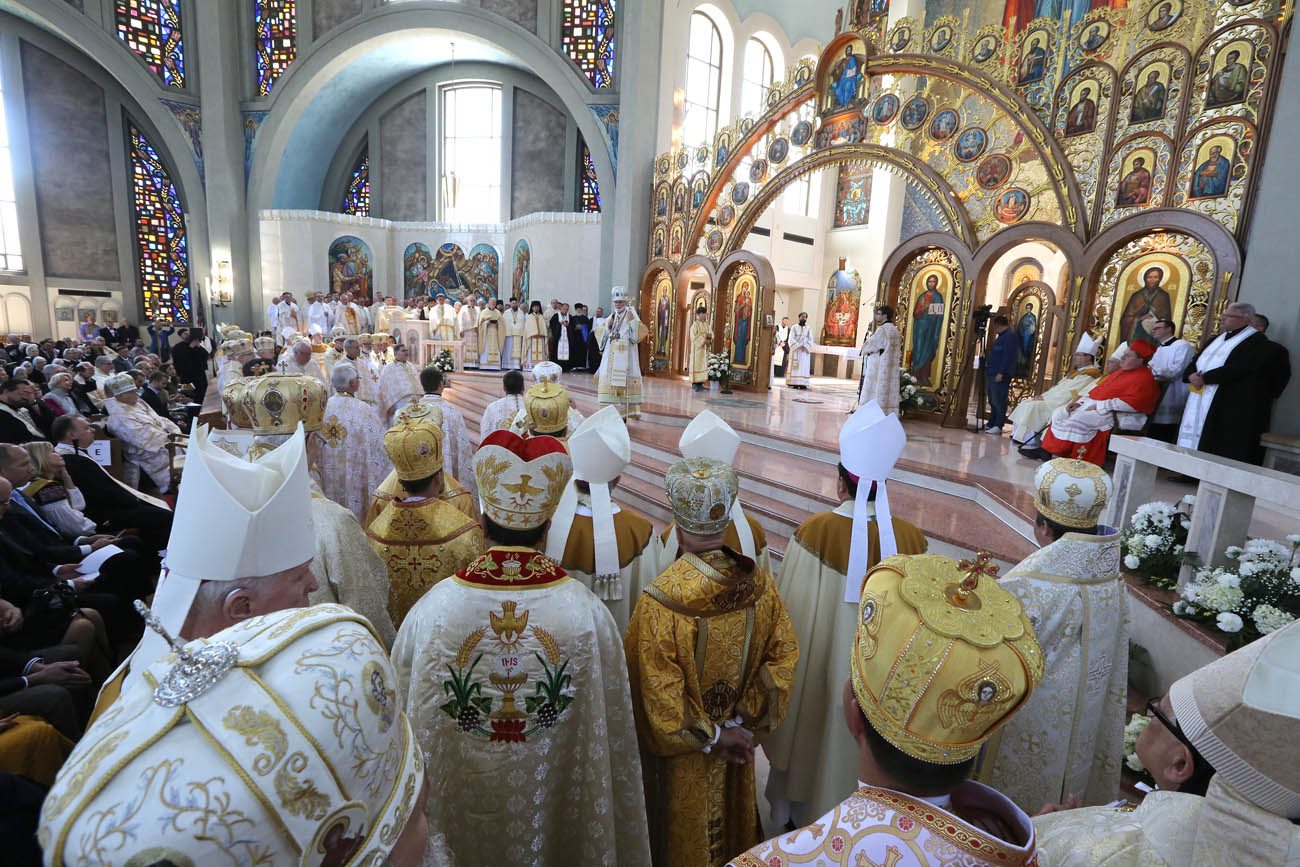 Philadelphia’s spacious Byzantine Ukrainian Cathedral of the Immaculate Conception was filled to capacity June 4, with an overflow congregation participating through television screens outside, for the Hierarchical Divine Liturgy and enthronement ceremony of Archbishop Borys Gudziak as the seventh metropolitan archbishop of the Ukrainian Catholic Church in the United States.

The Ukrainian Catholic Church is the largest of the eastern churches that are in full communion with the Holy See. His archeparchy (akin to an archdiocese) also includes the Eparchies (Dioceses) of Stamford, Connecticut; St. Nicholas in Chicago, Illinois; and St. Josaphat in Parma, Ohio.

Presiding at the liturgy were his beatitude Major Archbishop Sviatoslav Shevchuck, the Spiritual Father for the Ukrainian Catholic Church worldwide, and Archbishop Christophe Pierre, the papal nuncio to the United States who read greetings from Pope Francis and presented the Bull confirming the appointment of Archbishop Gudziak.

At the liturgy along with the estimated overflow congregation of approximately 2,500 outside the North Philadelphia cathedral were 50 bishops including Cardinal Timothy Dolan of New York, Cardinal Joseph Tobin of Newark, Archbishop Charles Chaput of Philadelphia and Archbishop Emeritus Stefan Soroka of the Ukrainian Archeparchy of Philadelphia.

Archbishop Gudziak, 56, was born in Syracuse, New York, the son of immigrant parents. He is a graduate of the University of Syracuse and holds a doctorate in Slavic and cultural history from Harvard.

In Ukraine, where he spent two decades, he directed the Lviv Theological Academy and saw it grow into a university. He was ordained a priest in 1998 and a bishop in 2012, and named to lead the Exarchy (Diocese) of St. Vladimir in Paris, which covers France, Benelux (a union of Belgium, Netherlands and Luxembourg) and Switzerland for the Ukrainians.

In the past Archbishop Gudziak, who has adopted the theme “Heart to Heart” for his administration, has shown a special regard for persons with disabilities.

To underscore this theme, during his remarks at the liturgy he asked that a young woman with severe disabilities be wheeled forward. “Jesus goes to the margins and that is where we should be,” he told his audience. “That is where we are going but we need to go together.”

“If we come together and open our hearts to the Holy Spirit, we will see miracles,” Archbishop Gudziak said.

He also called forward a young religious sister who has just recently taken her vows.

“Nobody is more counter cultural as a young woman in the 21st century who says, ‘I pledge my whole life to God’ at time when others say ‘money, money,  money,” he commented.

Among those visiting Philadelphia from Ukraine for the enthronement of Archbishop Gudziak was Lilya Kovalik, who worked in the same building with him when he was rector at the Ukrainian Catholic University.

“When he came to Ukraine, he was a historian,” she said. “He was an intelligent and a strong man and very devoted to the church. Many people knew him for his charity and when he was rector at the university, he never took a salary, he donated it back. He was held in such high esteem, all of the students wanted to go there; it has such a high rating for excellence.”

After the ceremony there was a buffet meal outside to feed the multitude. Not loaves and fishes but Ukrainian favorites with a touch of Philadelphia — steak sandwiches and soft pretzels – welcomed by all after the long liturgy, with the dignitaries mingling with the laity.

Diane Berkheiser, who came down on a bus from St. Michael Ukrainian Catholic Church in Frackville, Schuylkill County, Pa., is third generation Ukrainian in America. She was impressed by the openness of her new metropolitan archbishop. “He seemed so generous and sincere and really humble when he spoke,” she said.

Nicholas Spotts, also down from Frackville, thought the ceremony was awesome, and he was impressed by the enthusiasm of his new archbishop. “I think he has great ideas and he seems so heartfelt and prayerful. Everyone is excited about this.”

The enthronement ceremony was the main event of a week-long celebration of events both in Philadelphia and Washington, D.C. as the Ukrainian Catholic community in the United States welcomes its new archbishop.

NEXT: Catholic Charismatics keep fire of faith burning in archdiocese