‘Filled with the Spirit,’ 7 men ordained for ministry as deacons 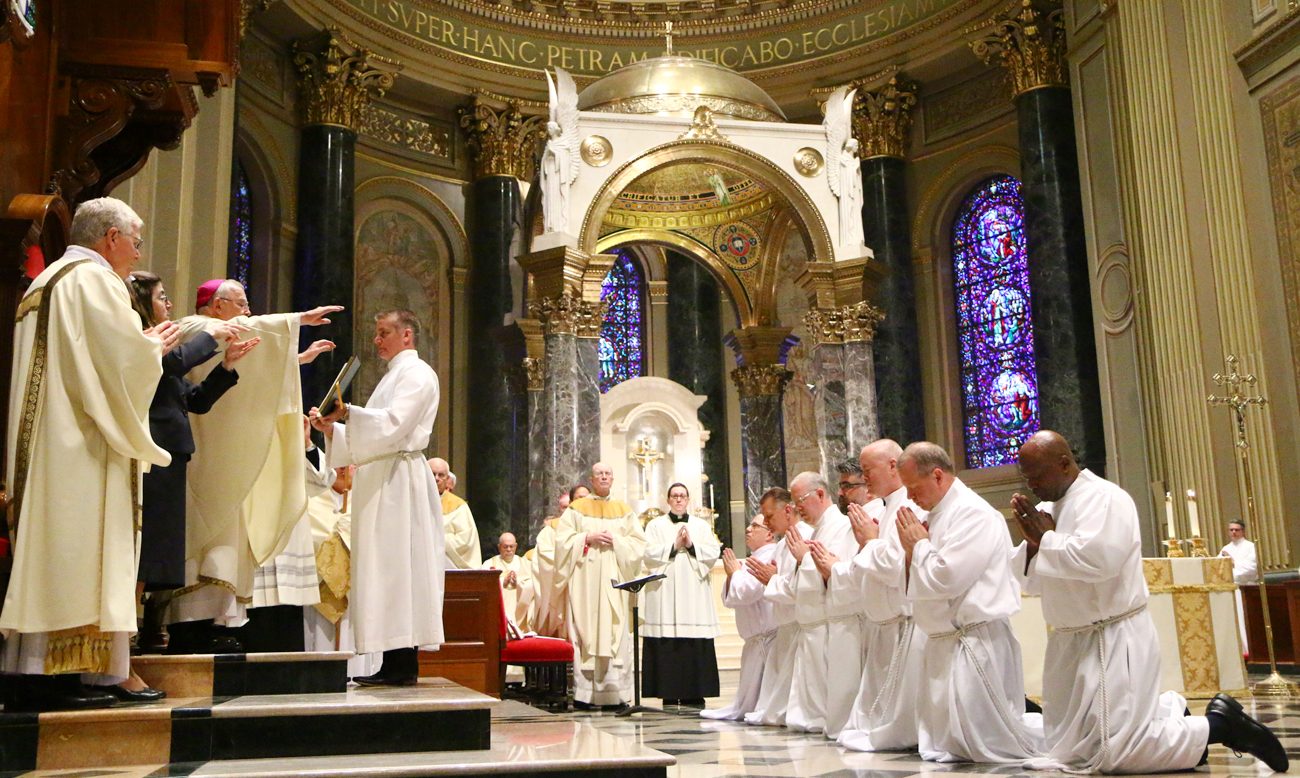 Archbishop Charles Chaput prays over the seven men that he ordained deacons for the Philadelphia Archdiocese on Saturday, June 7 at the Cathedral Basilica of SS. Peter and Paul.

In a ceremony remarkably similar to the ordination three weeks ago of seven young men to the priesthood, Archbishop Charles Chaput returned to the Cathedral Basilica of SS. Peter and Paul on Saturday, June 8 to ordain seven men for the permanent diaconate.

A big difference was they were all older, all married and most with children.

Seven was coincidental but it is significant. According to the Acts of the Apostles, in the very first diaconate ordination during apostolic times there were also seven: Stephen, Philip, Prochorus, Nicanor, Timon, Parmenas and Nicholas of Antioch.

Now in Philadelphia the order of deacons has been joined by Melvin, Michael, Matthew, William, Christopher, Steven and Gary of Hilltown.

One of the most interesting things about the diaconate is that although it is third in rank of ordained ministry behind bishops and priests, it was actually created second. First there were the bishops — the 12 apostles, including Matthias who replaced Judas. Their story is in Acts of the Apostles, 6:1-7, which was a reading at Saturday’s ordination Mass and summarized by Archbishop Chaput in his homily.

In that early church not all who received the Word were Jews, some were Hellenists (Greeks). The Hellenists believed the widows among their members were slighted during the charitable distribution of alms.

They took their complaint to the Twelve, who replied, “It is not right for us to neglect the word of God to serve at table. Brothers, select from among you seven reputable men filled with the Spirit and wisdom, whom you shall appoint to this task, whereas we shall devote ourselves to prayer and to the ministry of the word.”

From a lay perspective the Twelve come across in this as rather full of themselves. Jesus would not have been so blunt, but perhaps something has been lost in translation. The seven were selected and it worked very well. Stephen, as the first martyr, could be called the first saint in the church.

Over time in the Western Church the Order of Deacons became a final step before priestly ordination, but since the Second Vatican Council has been restored to its rightful place as a distinct ministry.

With that said, the permanent deacons are not simply appointed. They too undergo a rigorous period of preparation and education for approximately seven years before ordination.

At the end of the Mass, which was attended by spouses, parents, children and friends of the new deacons, Archbishop Chaput gave them their assignments. Six were assigned to their parish of residence.

All received enthusiastic approval from the congregation.

Perhaps the loudest applause was for Deacon William Griffin, who was not assigned to his home parish, St. Anselm in Philadelphia, but to the Deaf Apostolate of the archdiocese. A large contingent of the deaf community was in attendance at the Mass along with their families.

Also on hand were many already ordained permanent deacons including Deacon Chuck Lewis, for the class of 2009. “We are welcoming seven new brothers,” he said.

Patricia Schoenenberger, on hand to support her husband, Deacon Gary, commented, “It’s been a beautiful journey. I think by the grace of God he will be a good deacon.”

There too were men who are themselves in the deacon formation process, including Scott McDonald of St. Andrew Parish in Newtown, who is halfway through the program.

“When I started it seemed like it would be forever,” he said. “Now I feel it is forever and that is just fine.”