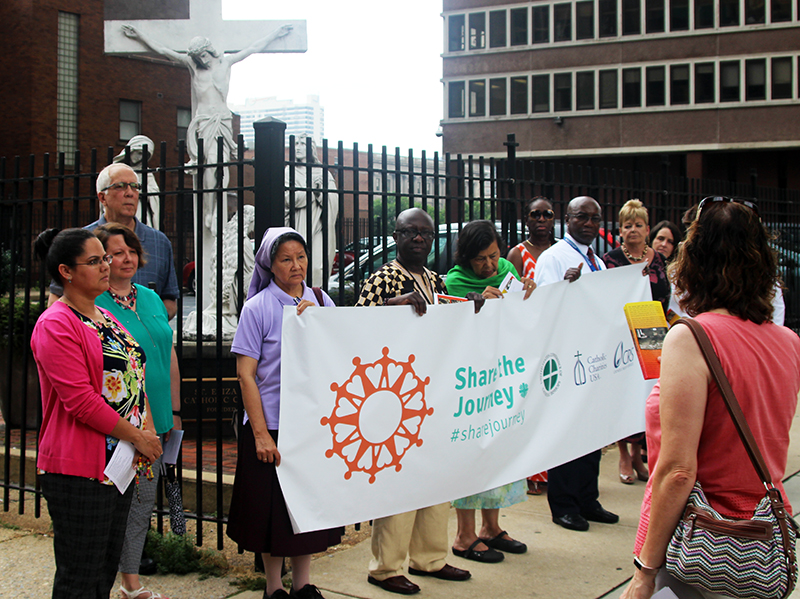 Archdiocesan staff gathered to mark World Refugee Day with a prayer walk around the Cathedral Basilica of SS. Peter and Paul, June 20. (Photo by Gina Christian)

Spirituality and solidarity were at the heart of a June 20 prayer walk undertaken by some 25 archdiocesan employees to mark World Refugee Day.

Staff gathered to pray portions of the rosary and the Stations of the Cross while walking the perimeter of the Archdiocesan Pastoral Center’s grounds adjacent to the Cathedral Basilica of SS. Peter and Paul. Several helped to carry a large banner inviting others to “Share the Journey” with migrants and refugees.

Co-sponsored by archdiocesan Catholic Human Services (CHS) and the Office for Pastoral Care of Migrants and Refugees, the walk focused attention on the more than 70 million now forcibly displaced people throughout the world. According to the UNHCR, the United Nation’s Refugee Agency, the figure represents “the highest levels of displacement on record.”

The UNHCR noted that over half of the world’s refugees are children. Conflict and persecution are the key reasons for current migration movements.

In a June 20 tweet, Pope Francis said that “with refugees, Divine Providence offers us an opportunity to build a more supportive, more fraternal society, and a more open Christian community, according to the Gospel.”

Earlier this week, President Trump announced via Twitter that U.S. Immigrations and Customs Enforcement (ICE) “will begin the process of removing the millions of illegal aliens who have illicitly found their way into the United States.”

While immigration from Mexico to the U.S. has declined in recent years, poverty and violence in the Central American countries of El Salvador, Honduras and Guatemala – known as the “Northern Triangle” – has led thousands to flee to neighboring nations, including the U.S.

(Watch a related interview with Auxiliary Bishop Edward M. Deliman on caring for migrants and refugees.)

Political and economic instability in Venezuela has also driven more than four million of that country’s citizens to seek refuge elsewhere, with Colombia and Peru as their primary destinations.

As they reflected on the Stations of the Cross, archdiocesan staff also meditated on the sufferings experienced by migrants and refugees, who routinely endure dehydration, sexual violence, malnutrition and exhaustion, as well as psychological and emotional trauma, during their journeys.

Through its Refugee Resettlement Program, archdiocesan Catholic Social Services (CSS) which has welcomed 84 migrants and refugees since September 2017.

The June 20 prayer walk concluded with a prayer led by Lis, in which he honored the talents and gifts of those who are forced to build new lives in distant lands.

“Bless all who have enriched our lives by crossing our paths, and to see, in their faces, the faces of the Holy Family,” he said.

NEXT: Senior fair kicks off summer while gearing up for November elections