Archbishop: Survival of church in Cuba depends on contact from abroad 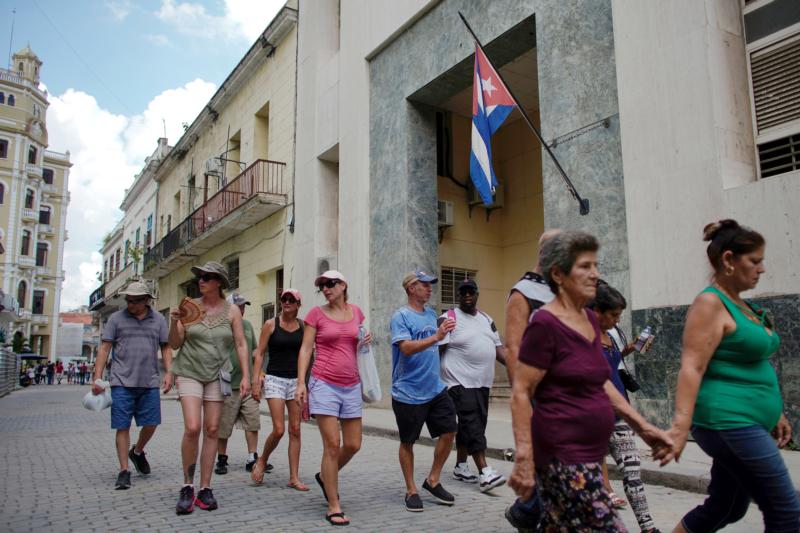 A group of U.S. tourists from a cruise ship walk through a street in Havana June 5, 2019. Days after the Trump administration announced it was placing new restrictions on U.S. travel to Cuba, Archbishop Timothy P. Broglio of the Archdiocese of the Military Services in Washington, criticized the policy, saying the transformation of the island, and the survival of the church there, depends on outside contact. (CNS photo/Alexandre Meneghini, Reuters)

WASHINGTON (CNS) — Days after the Trump administration announced it was placing new restrictions on U.S. travel to Cuba, a U.S. archbishop issued a criticism of the policy, saying the transformation of the island — and the survival of the church there — depends on outside contact.

“A half century of rigid isolation has consolidated only one thing: the very political structures U.S. Government policy seeks to change,” said Archbishop Timothy P. Broglio of the Archdiocese of the Military Services in Washington, who is chairman of the U.S. Conference of Catholic Bishops’ Committee on International Justice and Peace.

The U.S. bishops voice “concern that the strengthening of the embargo against Cuba is, ultimately, counterproductive to the development of civil society on the island,” he said in a June 6 statement.

Archbishop Broglio’s statement came two days after the Trump administration announced June 4 that it was putting a halt to what are known as “people-to-people” trips to the island, mainly cultural excursions that bring Americans into contact with the Cuban citizenry and culture on the island-nation.

The restrictions do not affect religious travel to the island, which is one of several ways to visit and often used by members of the U.S. Catholic Church.

“The very survival of the church in Cuba is dependent on the freedom of religious travel and donations from abroad,” he said. “Thanks to the generosity of American Catholics, for decades the USCCB has supported the work of the church in Cuba, providing her with financial, pastoral, and advocacy assistance,” he said. “The Holy See and USCCB have long held that the key to Cuba’s transformation depends not on isolation, but on greater cultural exchange between freedom-loving people on the island and the United States.”

Archbishop Broglio also urged maintaining religious travel to the island and ensuring the ability to send religious donations to the church in Cuba from abroad.

NEXT: CLINIC convening focuses on how to gain justice for immigrants, refugees