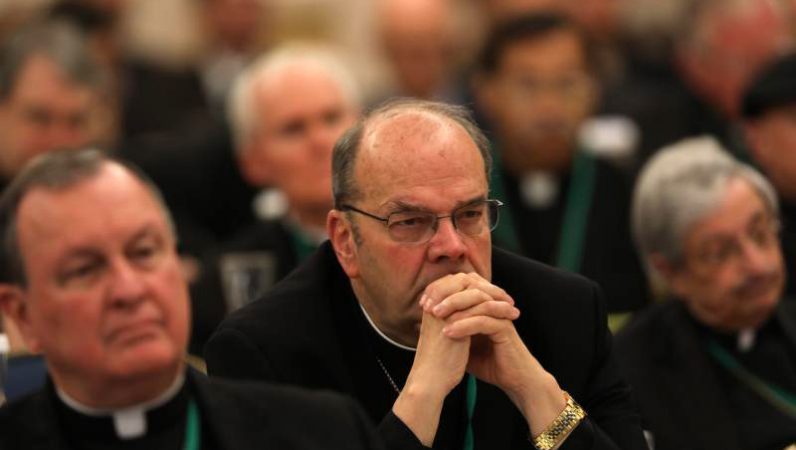 Bishops listen to speakers on the first day of the spring general assembly of the U.S. Conference of Catholic Bishops in Baltimore June 11, 2019. (CNS photo/Bob Roller)

UPDATED – BALTIMORE (CNS) — The U.S. bishops approved a 10-point statement, “Affirming Our Episcopal Commitments,” June 13 during their general meeting in Baltimore in which the bishops hope to regain “the trust of the people of God.”

The 217-1 vote, with two bishops abstaining, was applauded by the bishops gathered in Baltimore for the meeting. Approval was needed by two-thirds, or 180, of all U.S. bishops.

The bishops were scheduled to discuss the statement at last November’s general meeting, but a vote was put on hold after the Vatican asked the bishops to not pass any proposals regarding clerical sexual abuse until it had had sufficient time to review those proposals.

In 2002, the bishops approved a “Statement of Episcopal Commitment,” in which they declared that the provisions of the “Charter for the Protection of Children and Young People” applied to them as well.

But a stronger response was called for after last summer’s revelations of the decades-long abuses committed by Theodore McCarrick, a former cardinal who was laicized earlier this year, and the release in August of a Pennsylvania grand jury report on a months-long investigation into abuse claims against clergy and other church workers in six Pennsylvania Catholic dioceses over a 70-year period, beginning in 1947.

The week before the bishops’ meeting, details emerged from the Vatican-ordered investigation of former Bishop Michael J. Bransfield of Wheeling-Charleston, West Virginia, spelling out a multitude of financial and sexual improprieties. Bishop Bransfield resigned last September, shortly after fresh allegations of sexual misconduct involving adults were reported against him — the first allegations surfaced in 2012 and dated back to the 1970s, when he was a priest of the Archdiocese of Philadelphia.

“Some bishops have failed in keeping to these promises (made at their episcopal ordination) by committing acts of sexual abuse or sexual misconduct themselves,” the text of the proposed new statement says. “Others have failed by not responding morally, pastorally and effectively to allegations of abuse or misconduct perpetrated by other bishops, priests and deacons. Because of these failures, the faithful are outraged, horrified and discouraged.”

The statement adds, “The anger is justified; it has humbled us, prompting us into self-examination, repentance and a desire to do better, much better. We will continue to listen.”

“In his personal letter to the U.S. bishops in January 2019, Pope Francis reminded us that the consequences of our failures cannot be fixed by being administrators of new programs or new committees. They can only be resolved by humility, listening, self-examination and conversion.”

The document, formally presented June 11 by Cardinal Joseph W. Tobin of Newark, New Jersey, chairman of the bishops’ Committee on Clergy, Consecrated Life and Vocations, was itself updated from a version mailed to bishops in May and received further modifications during the Baltimore meeting. The previous document, then titled “Acknowledging Our Episcopal Commitments,” had nine points. The approved statement has 10.

The newest point reads: “We are also committed … to include the counsel of lay men and women whose professional backgrounds are indispensable.”

Other points in the proposed document include:

— “We will continue to reach out to the victims/survivors of sexual abuse by the clergy and their families in support of their spiritual and emotional well-being” so they can “find the care and healing they need.”

— Pledging that the requirements of the 2002 charter “apply to bishops as well as to priests and deacons and commit to hold ourselves and, fraternally, hold our fellow bishops to comply fully with the charter’s ‘Statement of Episcopal Commitment.'”

— Promote and disseminate details on how abuse can be reported to an independent third-party entity. “While safeguarding confidentiality of all persons involved, every effort will be made toward transparency and keeping the reporter appraised of the status of the case.”

— Amend if necessary diocesan codes of conduct to state “unequivocally” that they also apply to bishops.

— “We will be always mindful that there can be no ‘double life,’ no ‘special circumstances,’ no ‘secret life’ in the practice of chastity.”

— Quoting from the 2004 Vatican directory for the pastoral ministry of bishops, “Apostolorum Successores,” and Pope Francis’ May “motu proprio,” titled “Vos Estis Lux Mundi” (“You are the light of the world”), “our first response will be to provide for the pastoral care of the person who is making the allegation, as well as follow the established church and civil procedures to investigation. This will be done in cooperation with lay experts and civil authorities.”

— Participate in gatherings “in regard to best practices in dealing with sexual abuse of minors, and sexual misconduct with or sexual harassment of adults.”

— When proposing names of potential future bishops, “we will offer candidates truly suitable for the episcopacy.”

Cardinal Tobin told his fellow bishops June 11 that it was “the expressed desire” of the U.S. Conference of Catholic Bishops “to include bishops in the requirements of the charter (‘Charter for the Protection of Children and Young People,” approved in 2002) in a way that didn’t require a change in the Essential Norms,” also passed in 2002 and are considered particular church law for the United States.

It represents, he said, “a pledge to hold ourselves and one another to complying fully to the ‘Statement of Episcopal Commitment,'” also approved in 2002. “We can’t immediately change the Essential Norms, but we have the possibility of taking what is said in the charter and applying it to ourselves.”

Following a question posed June 13, he said he sees no contradiction between “Affirming Our Episcopal Commitments” and the “Statement of Episcopal Commitment,” nor was the former meant to replace the latter. “It is on ourselves to uphold our standards,” he added.

Bishop W. Shawn McKnight of Jefferson City, Missouri, said during the discussion, “Now that we have experienced this horrible year of bad bishops, the laity are demanding, too, that something must change.” 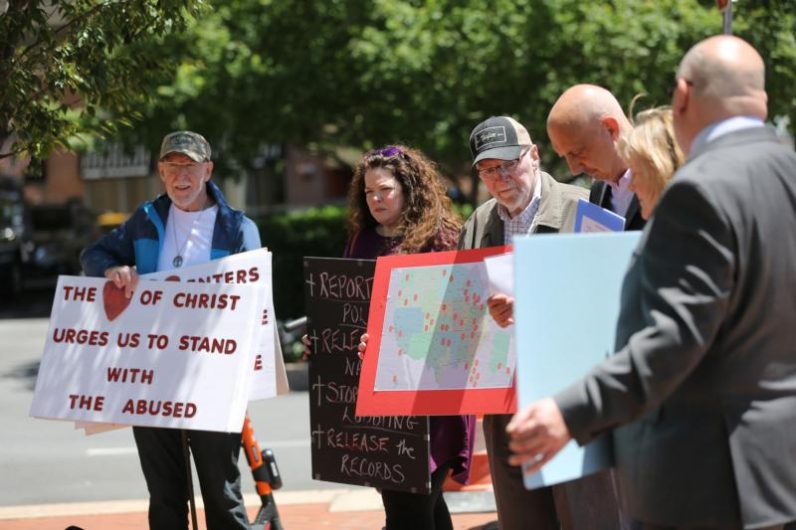 Survivors Network of those Abused by Priests and other groups gather outside a Baltimore hotel June 11, 2019, on the first day of the spring general assembly of the U.S. Conference of Catholic Bishops. (CNS photo/Bob Roller)