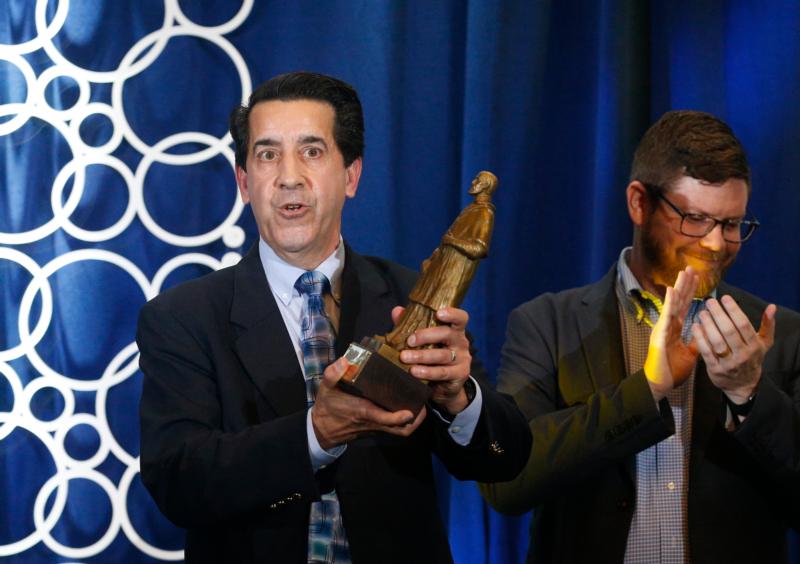 ST. PETERSBURG, Fla. (CNS) — Mark Lombard, business manager and a contributing editor of the Clarion Herald, newspaper of the Archdiocese of New Orleans, is the recipient of the 2019 St. Francis de Sales Award from the Catholic Press Association of the United States and Canada.

The award, the highest the CPA presents to an individual, recognizes “outstanding contributions to Catholic journalism.” It was given during a June 21 lunch at the Catholic Media Conference in St. Petersburg.

In accepting the award, Lombard, said he was honored, humbled and thankful to God that his colleagues in the Catholic press considered him for an honor named for a saint who was a communicator and had “a fire in the belly for truth.”

He paid tribute to his fellow nominee, Rob DeFrancesco, who is director of communications for the Diocese of Phoenix and associate publisher of The Catholic Sun diocesan newspaper.

He described DeFrancesco as a person “who embodies what we all hope to grow up to be. In Rob we have someone who is insightful, passionate about communications, deep of faith charitable and patient, and most of all a gentleman and more than that a gentle man.”

Lombard, former senior business officer/chief financial officer at Catholic News Service, acknowledged his wife, Mary Carty, a writer, editor and award-winning photographer in her own right. “Mary is my counselor and my consoler, my rock and my refuge. She’s also my best friend, whom I happen to love very, very much.”

He said the list of other people he needed to thank was a very long one that included those in attendance at the St. Petersburg conference, those who were not in St. Petersburg and “those who are no longer with us.”

“I’m grateful to all the people who have supported me over these 45 years in the Catholic press,” Lombard said. “You have made me better. I’m fortunate and blessed to be bound to the Catholic press and its intense desire to serve people who know God and those who do not know God,” its dedication to truth, and its “fair and ethical” presentation of the truth, “even when that truth is difficult and challenging.”

“Our past, our present and our future successes are not individual but in direct proportionate to building strong, vital teams (in) our own organization but also (by) joining with others, and where every person, every role, every department is appreciated, valued and celebrated.”

He said the St. Francis de Sales Award was not his alone but one he “shared with colleagues I have had the privilege of working with for five decades.” He included in that long tenure in Catholic journalism how it all started for him: He was an intern for The Catholic Sun, newspaper of the Diocese of Syracuse, New York.

Lombard has served on the board of the CPA in numerous capacities, including developing a Catholic press leadership institute, being involved in peer publication review and most recently spearheading a committee to develop a “Fair Publishing Practices Code” for the CPA.

Fifty people were involved in the project over many months, with many serving on subcommittees and the overall committee to produce a working draft, revisions and a final document that will soon be accessible to CPA members on the organization’s website, www.catholicpress.org.