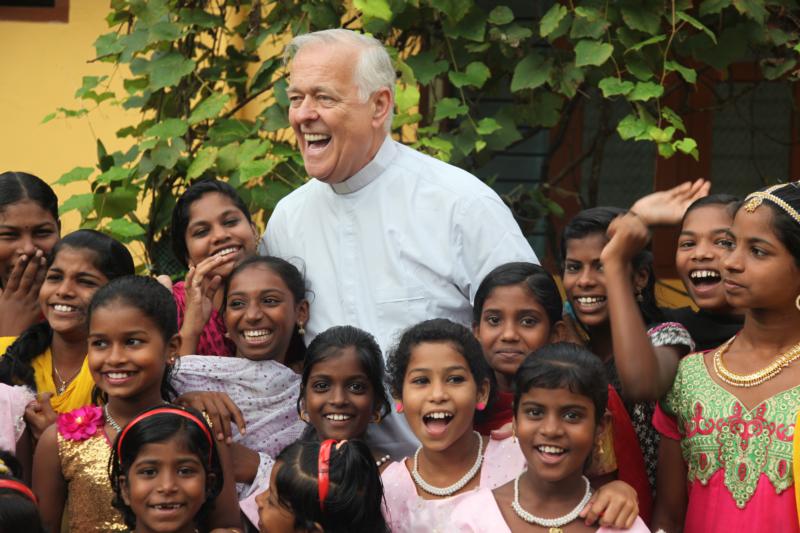 The award, the CPA’s highest honor for publishers, was announced at lunch June 20 during the annual Catholic Media Conference June 18-21 in St. Petersburg.

Michael LaCivita, communications director for CNEWA, accepted the award on Msgr. Kozar’s behalf, informing the crowd the priest could not be with them because he had to have a medical procedure and he is suffering from kidney failure. LaCivita asked for prayers for Msgr. Kozar but added that he is otherwise in good health and good spirits and is in line to get a donor kidney.

The nomination entry for Msgr. Kozar described him as “a champion of journalism, promoting accountability and transparency in reporting, affirming a commitment to excellence and promoting the church’s evangelical witness throughout the world, especially in some of its most embattled corners.”

“From the slums of India’s ‘untouchables’ to the desperate camps of Eritrean, Iraqi and Syrian refugees and to the barren containers housing Armenia’s elderly ‘orphans,'” it said, “John Kozar has been an advocate for commanding storytelling that informs as well as celebrates compassion and outreach service of the Gospel.”

It also said Msgr. Kozar — ordained for the Diocese of Pittsburgh in 1971 — was “a parish priest on loan to the missions” and someone who “has promoted formation of persons as the cornerstone of healing a broken world.”

The nomination called the priest more than a publisher, saying: “He is in his bones a journalist who relishes getting a good story and sharing it.” Through his photography, essays, videos, emails and reports, he has kept readers “informed and engaged, bolstering CNEWA’s credibility and winning readers’ loyalty.”

Using his “considerable skills” as a photojournalist, which he first developed in high school, Msgr. Kozar takes readers to far-flung corners of the globe to show the Gospel at work,” it said. His ethic and spirit of transparency and accountability “set the standard for every publisher.”

The award is named after the first bishop of Charleston, South Carolina, who in 1822 founded The Catholic Miscellany, the first Catholic newspaper in the U.S. Bishop England edited the paper, wrote most of its material and even helped print it. He published a missal and a catechism and wrote the first pastoral letter published in the United States.