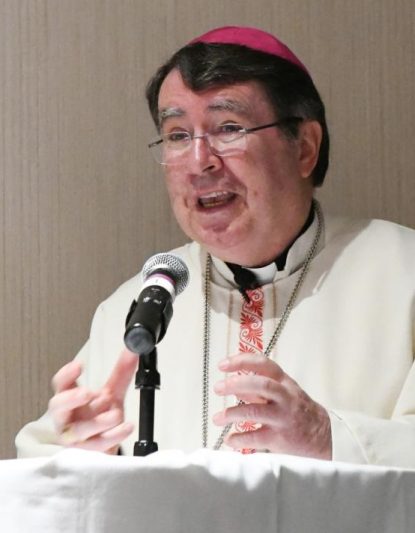 Archbishop Christophe Pierre, apostolic nuncio to the United States, speaks during Mass in Pittsburgh May 30, 2019. He was there for the 2019 conference of the Catholic Legal Immigration Network. (CNS photo/Chuck Austin, Pittsburgh Catholic)

But the pope also knows that migration is a global issue, not just an American, Mexican or Central American problem, said the apostolic nuncio to the United States.

Archbishop Pierre addressed migration and other topics during an extended, wide-ranging interview with the Pittsburgh Catholic, the diocesan newspaper, while he participated in the 2019 Convening of the Catholic Legal Immigration Network.

The 73-year-old archbishop, who is from Rennes, France, has served in the Vatican diplomatic corps for 42 years. He has worked in New Zealand, Mozambique, Zimbabwe, Cuba, Brazil and Switzerland, and been papal nuncio in Haiti, Uganda and, most recently, in Mexico (2007-2016).

Archbishop Pierre was appointed the papal representative to the United States by Pope Francis in April 2016. He said that all of his assignments have provided some important insights into migration worldwide.

“Now it has become a very European problem,” he said. “But you know, the problem in America is small comparing, for example, to the Middle East.”

Lebanon has a bigger refugee population than the number of its own citizens, Archbishop Pierre said. Jordan and Turkey also have large numbers of refugees who left Syria, Iraq and other countries because of war and poverty.

“Before I was in Mexico, I spent eight years as nuncio in Uganda. For the moment, Uganda receives hundreds of thousands of refugees from South Sudan. And actually, they are welcomed, and probably they will spend their lives, where they are given territory and so forth.”

Migration is something that is normal and extraordinary at the same time, he said. It has always existed in the United States and many other countries. When migration becomes excessive, it becomes a crisis, the archbishop said.

“When the migrants are ‘new’ people — new for their race, their color, their religion and so forth — it creates a lot of fear. This is what happens today,” he said. “I think it’s important for the politicians, for those who govern the nations, not to take the opportunity to exacerbate the feeling of the people, and to build upon the fear for pure electoral reasons,” Archbishop Pierre said.

In his keynote speech May 29, the nuncio highlighted Pope Francis’ 2018 message for the World Day of Migrants, in which the Holy Father advocated four points for dealing with migrants and refugees: to welcome, protect, promote and integrate.

“It’s the duty of the politicians to help the people, to receive, to integrate and to protect the people because, at the end of it all, they are human beings,” Archbishop Pierre told the Pittsburgh Catholic.

“I know that it’s not easy. I know that we have to find solutions. But solutions are always possible. But the solutions must be reasonable, and must be done through dialogue.”

The archbishop was asked about the Catholic Church’s efforts to reach out to youths following the Synod of Bishops on young people and vocations. He said one of the main challenges is educating the young.

“The main function of a society is to educate, to transmit the traditions, what we call tradition,” he said. Tradition comes from the Latin root word for “transmit,” and one of the profound difficulties is transmitting.

The church has said that education is centered in the family, Archbishop Pierre said. But “the family is in crisis, and this is the reason why the family cannot educate anymore, because if you don’t have a stable family you have no education, and the victims are the young people.”

The archbishop said he hopes that the renewed focus on young people and education will bear fruit as the church moves forward.

On religious freedom, Archbishop Pierre said the U.S. church has focused attention on those threats for several years. It’s a basic human right that’s guaranteed in the U.S. Constitution.

“This is the beauty of America, by the way. This is the reason why so many people come to America, for the freedom. I think we cannot abolish this beautiful tradition. The best you can offer is your freedom.”

He said the world is still far away from universal freedom of religion. Sometimes it’s not a government that is against a particular religion, the nuncio said, but one religion against another.

“So I think it’s a permanent, very sensitive issue. The struggle is not finished.”

Next, the nuncio was asked about the problem of Catholics leaving the practice of their faith, and dioceses and parishes having to adjust to having fewer of the faithful.

“I think, first and foremost, the reality is that the church is not dead,” he said.

“But the church lives in this world, and one of the characteristics of this world is that it is very rapidly changing.”

When societal values change, it creates crisis among individuals, families and institutions, Archbishop Pierre said. It’s not easy in a society where values are shifting or “liquid.”

“Where we can recognize that the world is changing is the difficulty in transmitting faith and values, from parents to children, from professors to their students, from priests to the faithful,” he said.

Even though this was his first visit to Pittsburgh, the archbishop was aware of reductions in parishes occurring in Pittsburgh related to the diocese’s “On Mission for The Church Alive!” initiative. The program is transitioning the number of parishes from 188 to 58.

“It’s not the first time,” he said. “It happens in Europe. It happens in most of the dioceses in the northern part (of the U.S.), especially the Northeast. Why? I think because of the shift of population.”

Archbishop Pierre said many Catholic churches are being built in the South.

“A lot of Americans go from the north to the south, but you have also the immigration from the south to the southern part of the country.” The church is seeing rapid growth in Georgia, Florida, Texas and California, he said.

“I came from a diocese where we had 400 parishes when I became a priest. Now we have difficulty having priests in 60 or 70 parishes,” the nuncio said. “So times are changing where vocations are not as big. Before you had a lot of Catholic schools and a lot of religious sisters.

“It’s very painful, so we need really to accompany the people. Usually, I think the bishops are trying to do the best they can for the sake of the mission.”

NEXT: Plan outlines restrictions on bishops facing claim of abuse