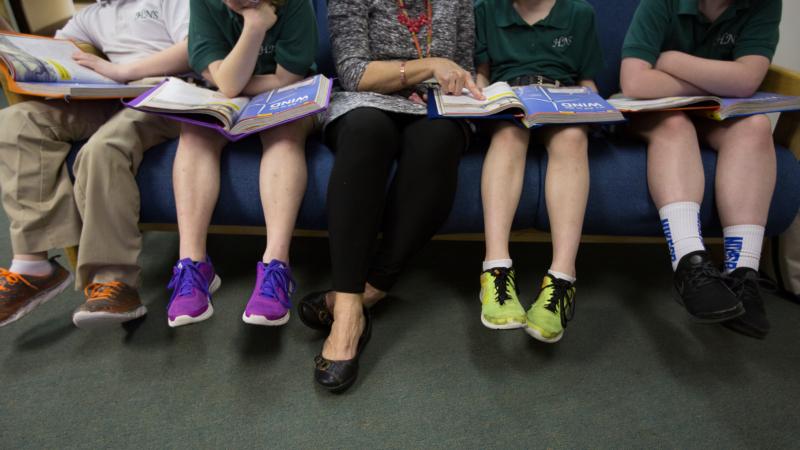 A teacher at Holy Name of Jesus Catholic School in Henderson, Ky., helps third-grade students with a reading lesson March 28, 2019. Catholic bishops in the U.S., England and Wales welcomed the Vatican’s statement that gender ideology is opposed to faith and reason, and that Catholic schools and parents must help teach children that gender is fixed from birth. (CNS photo/Tyler Orsburn)

WASHINGTON (CNS) — Catholic bishops in the U.S., England and Wales welcomed the Vatican’s statement that gender ideology is opposed to faith and reason, and that Catholic schools and parents must help teach children that gender is fixed from birth.

Bishop Michael Barber, chairman of the U.S. bishops’ Committee for Catholic Education, noted the complexity of the issue.

“The clarity of church teaching, rooted in the equal dignity of men and women as created by God, provides the light of truth and compassion that is most needed in our world today,” Bishop Barber said in a statement released June 11.

The Bishops’ Conference of England and Wales also issued a statement praising the document as a complement to its 2018 statement, which expressed concern for the increasing confusion gender ideology was causing.

The Vatican document resolved the English and Welsh bishops’ concerns and is “a welcome contribution to developing Catholic thought on gender,” said a spokesman for the conference.

In a document published June 10, the Vatican Congregation for Catholic Education said the intention behind gender ideology is “laudable” in its concern for fighting discrimination and respecting differences, and that the Catholic Church encourages all to respect and care for those who “live situations of sexual indeterminacy.”

However, the document, “Male and Female He Created Them: Toward a Path of Dialogue on the Question of Gender Theory in Education,” ultimately concludes that gender is not a personal choice.

In its 2018 document, the Bishops’ Conference of England and Wales said: “We recognize that there are people who do not accept their biological sex. We are concerned about and committed to their pastoral care. Through listening to them we seek to understand their experience more deeply and want to accompany them with compassion, emphasizing that they are loved by God and valued in their inherent God-given dignity. There is a place of welcome for everyone in the Catholic Church.”

On Twitter, Jesuit Father James Martin, author of “Building a Bridge: How the Catholic Church and the LGBT Community Can Enter into a Relationship of Respect, Compassion, and Sensitivity,” gave the document conditional praise.

“Overall, it should be praised for inviting listening and dialogue. Yet the dialogue is so far mainly with philosophers and theologians; not with scientists, nor with LGBT people and their families,” he said in a tweet.

NEXT: USCCB’s election year document to be supplemented by letter, videos