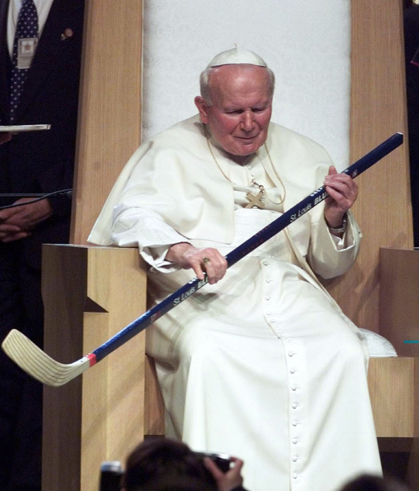 St. John Paul II swings a St. Louis Blues’ hockey stick given to him by young people during his visit to the Kiel Center in St. Louis for rally in this Jan. 26, 1999, file photo. (CNS photo/Rick Wilking, Reuters)

ST. LOUIS (CNS) — Before the St. Louis Blues beat the Boston Bruins in Game 7 on June 12 to win the National Hockey League’s Stanley Cup for the first time in the team’s 52-year history, Twitter was alive with hopes for a little divine intervention for such a victory — maybe even from St. John Paul II.

Many a tweet recalled a Jan. 26, 1999, visit the pontiff paid to St. Louis and just how comfortable he looked holding a hockey stick given to him by young people gathered for a rally at the arena that is home to the Blues, then called the Kiel Center.

At the end of the rally, which drew a crowd of 20,000, the pope also received a special jersey in the Blues’ colors — bearing the name “John Paul II” and the number “1.”

When the Blues headed to the Stanley Cup Final, Catholics of the Archdiocese of St. Louis were praying hard for their team, said a May 23 editorial in the St. Louis Review, the archdiocesan newspaper.

“Our city has caught Blues fever with fervor,” it said. “Even Archbishop Robert J. Carlson, not a native of St. Louis but no stranger to hockey as a Minnesota native, exclaimed at the end of his May 22 State of the Archdiocese address to employees: ‘Go Blues!'”

“Many people had given up on the Blues, who in January were the worst team in the NHL,” the editorial noted. “It’s a lesson in perseverance and never giving up. It’s a lesson that we certainly could apply to our lives, and especially our faith. There’s always hope. For Catholics, that hopes lies in Jesus. And, for #CatholicSTL, in the Blues, too.”

The long-suffering team and its loyal fans finally got their magical moment in Game 7 with a 4-1 victory in Boston. And the celebration will continue with a parade to honor the champion team June 15 in St. Louis. 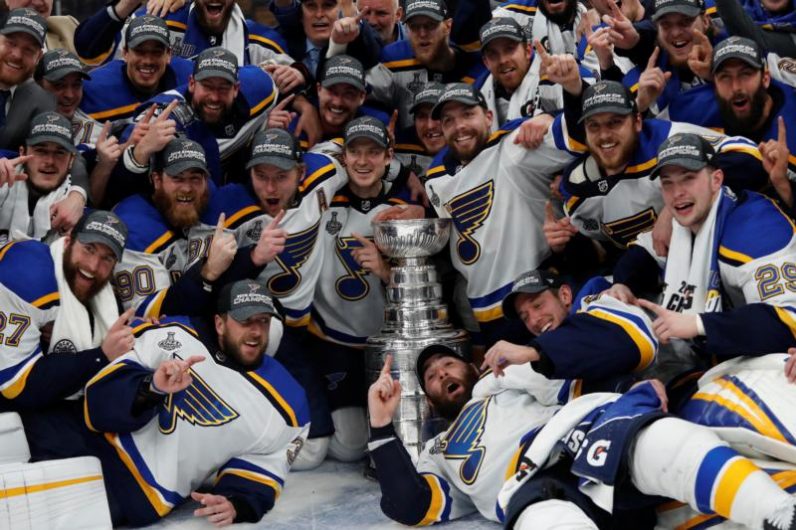 St. Louis Blues players pose for a team photo with the Stanley Cup after defeating the Boston Bruins in Game 7 of the 2019 Stanley Cup Final in Boston June 12, 2019. It was their first Stanley Cup in team history. (CNS photo/Winslow Townson, USA TODAY Sports)

PREVIOUS: Teams ending their season in state playoffs view it as success