Teams ending their season in state playoffs view it as success 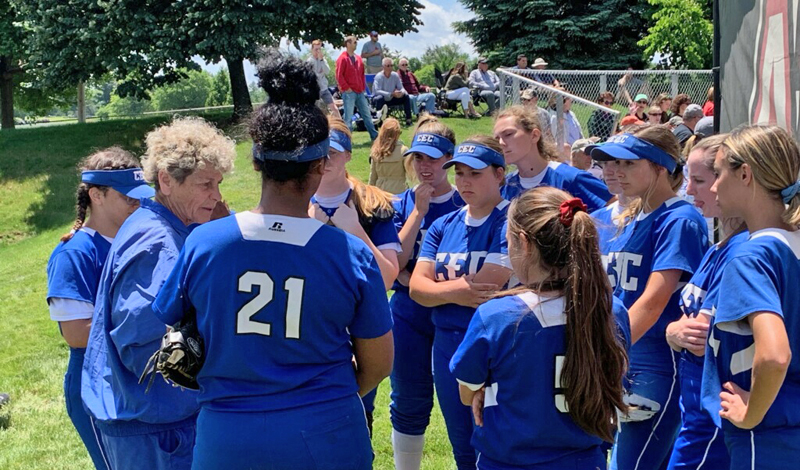 Conwell-Egan coach Sandy Hart gathers her troops after losing in the first round of the PIAA Class 2A state softball tournament. (John Knebels)

The highs and lows of baseball and softball were at full bloom on June 3. Assessing the result depends on one’s level of optimism.

Starting under a blistering sun 11:30 a.m. and finishing amid wind gusts around 8:15 p.m., five Catholic League softball teams played in the first round of the PIAA state tournament at Arcadia University.

Each of them — Class 6A St. Hubert, 5A Archbishop Ryan, 4A Lansdale Catholic, 3A Neumann-Goretti and 2A Conwell-Egan — lost by 10 runs or more and by a composite run total of … well, no need to rub salt.

Meanwhile, at different locations throughout the Delaware Valley, five Catholic League baseball squads were doing likewise. Of those, three lost – albeit by a respectable 15-7, with two of the games decided by a single run.

However, there’s another point of view that merely reaching the state tourney automatically defines a successful season. After all, the only way to meet Pennsylvania’s elite is to capture the city title in your own classification.

“I would definitely classify our season as successful,” said Lansdale Catholic first-team All-Catholic junior Megan Burns. “We started rocky and built up from there. Our goal this year was to get to where we were last year, and we qualified for districts and states. We achieved bigger goals, and that’s what I consider a success.”

Burns considered the entire season, one that included a second-place finish in the regular season and a heartbreaking 8-7 loss to St. Hubert’s in the Catholic League semifinals.

“Success to me is motivation, passion, determination and hard work,” said Burns. “If every person on the team works together to maintain those actions, that’s what makes us a successful team.

“Winning is the outcome at the end of the day. Qualifying for PCL playoffs and qualifying for districts and states was proof of our hard work. Although our loss was hard to take, our successful season is what I am more proud of than anything.”

Last year’s champion, Archbishop Ryan, started off to a scorching 8-0 mark before eventually placing fourth and losing to top-seed Cardinal O’Hara in the semifinals.

Going far into the state tournament would have been a welcome liberation, but it was not to be.

“It was upsetting to lose, but we definitely had a successful season,” said senior Erin Woltemate. “We were in a bit of a rough patch for a little and then came back and ended up making it as far as we did.

“It was a little disappointing to lose in the semi’s, but we were happy we got to keep going in states. All around, we didn’t give up and played our best.”

St. Hubert’s started with a 10-run loss to Cardinal O’Hara and ended the season in states with a similar result. In between those two-plus months, the Bambies got better and better, eventually riding a third-place seeding into the school’s first Catholic League title since 2012.

So, was Hubert’s season still a success? Guess that’s a stupid question.

“I would definitely classify this as a successful season,” said second-team All-Catholic senior Erin Hogan. “It would be amazing winning states. That would definitely have been the icing on the cake.”

Conwell-Egan first-team All-Catholic junior Cori Jones said the Eagles deserved to feel positive about not only this season, but the seasons ahead.

La Salle baseball won its second straight championship and then rolled to an easy district win. But in the first round of states, the Class 6A Explorers could not solve the Souderton High pitcher, dropping a 7-1 decision.

After so many victories and still-lofty goals, the Explorers were suddenly eliminated. That, however, did not diminish their overall accomplishments.

“This season has been more than successful,” said La Salle senior Owen Lawn. “Anytime we can make it to the Catholic League championship, it is a success.

“Bringing home the championship is very rewarding. We were the first team to bring it home back-to-back in school history, so that just shows how hard it is to attain the PCL championship and how hard we worked for it.”

Class 4A Cardinal O’Hara, which lost in the Catholic League final to La Salle, had the tying run on base in a 9-8 loss to North Schuylkill. According to first-team All-Catholic junior Joe Kelly, you won’t find many frowns in Springfield, Delaware County.

“Great season, loved every second of it,” said Kelly. “Made life-long friends. Didn’t achieve our goal, but great season. Knowing eventually that we are gonna be able to meet up and be able to reflect on the season is awesome. Achieved our goal of winning District 12, and the fact it is the first time in school history is so cool.”

Neumann-Goretti fell, 3-2. The Saints had lost in the first round of the Catholic League playoffs, an anomaly for that highly proficient program.

“Believe it or not, I do consider this season a success,” said first-team All-Catholic and Pitcher of the Year senior Joe Messina, who will attend La Salle University next year. “We were an extremely young team, and I think what my group of seniors and I were able to – to act as leaders and role models for them – is beyond what we are capable of on the field.

“It’s more than the wins and losses, and I think this year was a great culture building year for the program especially in years to come.”

Saving the day for the Catholic League were Class 5A Archbishop Wood and Class 2A Devon Prep. While the former captured a dramatic 5-4 win over West Chester Rustin, the latter defeated Kutztown, 4-1.

On June 6, Wood lost, 4-0, to Blue Mountain, but Devon Prep continued its season with a 5-0 victory over Conemaugh Township. The Tide faces South Williamsport 4:30 Monday in Pine Grove. Win there, and they reach the state championship June 14 at Penn State.

PREVIOUS: Shanahan drops tight District 1 final to rival but goes on to states

NEXT: More than a few fans prayed for St. Louis Blues to win Stanley Cup