The Bishop Shanahan softball team receives their runner-up medals after dropping the District One Class 5A final to rival West Chester East, 1-0, May 29. Nevertheless, Shanahan is advancing in the PIAA state softball tournament. (Photo by Dan McCarty)

The continued success of this year’s Bishop Shanahan softball team looked promising as the No. 2 seed in the District One Class 5A playoffs shut out the sixth-seeded Upper Merion Vikings, 2-0, in the semifinal round of the tournament on May 24 to earn its place in the title game.

Ironically, the Eagles were faced with the challenge of taking on the district’s top-seed and their Ches-Mont League rival, the West Chester East Vikings, in the finals on Wednesday, May 29 at Immaculata University.

Shanahan had dropped two decisions to East during the regular season and went into this crucial game desperately looking for revenge as well as an opportunity to recapture its 2018 district crown.

But reminded of the adage that little things make a big difference, Shanahan ultimately slipped in the title game, 1-0, dropping its overall record to 16-7 on the season.

“It just came down to one error and the luck of one timely hit,” said Shanahan’s star pitcher Devon Miller.

Also dominant on offense, Miller collected the first hit as she singled in the first inning but East allowed no damage.

The next three innings came and went. Miller gave up one hit in the bottom of the fourth but got out of the inning without surrendering a run. 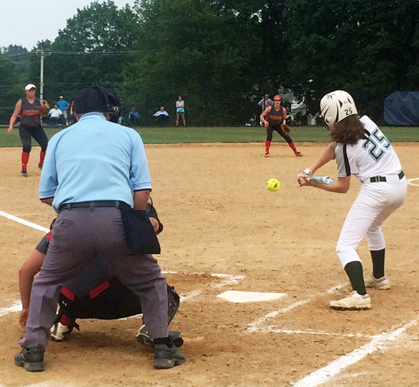 A Shanahan player swings at a pitch in the District One Class 5A final May 29 against rival West Chester East. (Photo by Dan McCarty)

Shanahan’s Ava Laughlin hit a leadoff single in the fifth and stole second base. After a 1-2-3 bottom of the fifth, Megan Whitaker singled in the sixth but the score was still 0-0.

That changed in the bottom half of that inning. Miller gave up two hits including a one-run double that ended up deciding the game. Shanahan entered the seventh inning trying to keep it alive and score but the Vikings’ defense was stifling.

“We’ve always struggled with this team,” said Miller. “They are so good at capitalizing on our errors. It’s always been close.”

Although it was a difficult loss, the Eagles walked off the field knowing they worked hard with plenty of confidence in themselves as they prepare to move on to states. As the score indicated, this was one of Shanahan’s strongest days on defense.

“All year it’s been great,” said Whitaker, who played right field. “It’s been a long road. I’ve never seen energy like this both on the field and in the dugout.”

Miller recorded a total of 12 strikeouts on the afternoon.

“We by far deserved to win that game,” said Miller. “We had more hits, less strikeouts. I’m so proud of our team for playing how we did.”

Cecilia Grahn was Miller’s catcher the entire game. The duo has been working together all season long as well as during winter warmups. After losing a catcher to graduation last year, Grahn stepped up and took over with ample experience.

“I just feel like we work as a really good team,” said Grahn. “We are both good listeners, both good teachers.”

Bishop Shanahan began its PIAA state playoff march in style with a 4-0 win over Bangor on Monday, June 3, featuring a dominant Miller who notched 19 strikeouts.

NEXT: Teams ending their season in state playoffs view it as success