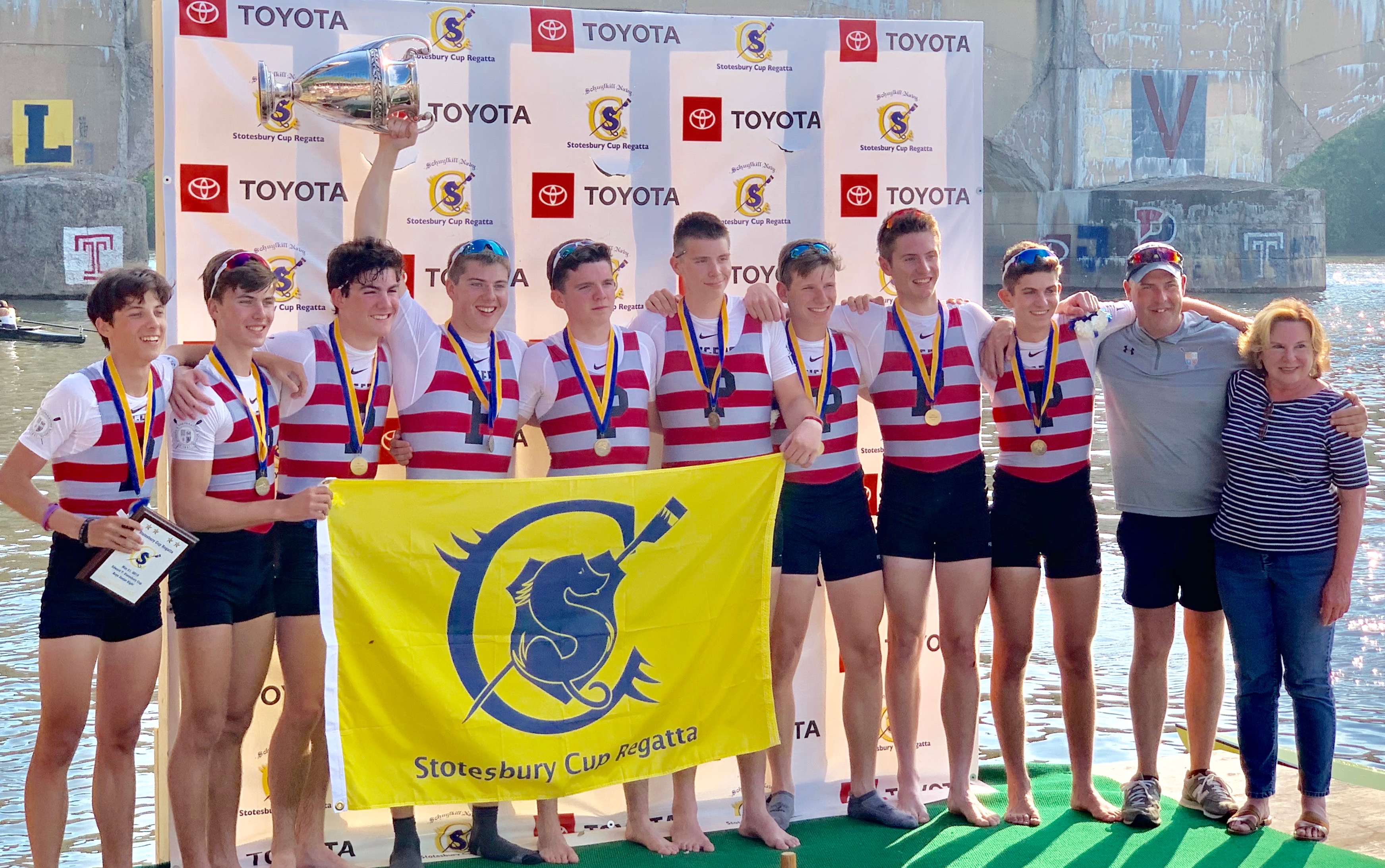 Eight St. Joe’s Prep crew team members filed into a pew at St. Norbert Church in Paoli for a Saturday evening vigil Mass before one of the biggest rowing events the boys would participate in this spring: the Stotesbury Cup Regatta, held May 17-18 in Philadelphia.

The Schuylkill River has served as the hosting site of the Stotesbury Regatta since 1927. What started out as a local Philadelphia race has become the largest high school rowing event in the world, attracting more than 5,000 competitive athletes and 10,000 spectators each year.

With the iconic sport of rowing taking the nation and the world by storm, winning the Stotesbury Cup Regatta on your hometown river is, in short, a very big deal.

The pre-race vigil Mass was the idea of the young men in attendance. Afterward, a woman sitting in the pew behind the boys asked, “Are you part of a sports team?” When the boys confirmed they were and they had a big race the next day, the woman prophesied, “You boys are going to win that race.”

And win they did.

In fact, the Prep Varsity 8’s victory at the Stotesbury closed a nine-year gap and restored a rowing legacy at 17th and Girard, home of the Gesu Church on the Prep’s North Philadelphia campus.

Along with the Varsity 8 win, the Lightweight 8 men continued their impressive 10-year streak by claiming the gold yet again. Not to be outdone, the JV8, Freshman 8 and Novice 8 also all secured a gold medal win in their respective categories. The teams’ uniforms proudly display the Latin moniker AMDG, translated as “For the Greater Glory of God.”

The St. Joe’s Prep Crew team, led by head coach John Fife, began their path to success on the water by first spending time in the Prep weight room in preparation for the crew season.

Beyond their performance on the river, the Prep trains these young student athletes to be men for others, both in and out of the boat. This is most evident in their support of a teammate who lost his mother to cancer and their heartfelt welcome of another team member who, on his own accord, decided to enter into the Catholic Church.

Now, the combined success of this year’s program has led the Prep Varsity 8 boys on a path each rower dreams about: the Henley Royal Regatta, the best-known rowing competition in the world.

Held July 3-7 on London’s River Thames, the Henley attracts thousands of visitors over a five-day period. Spectators witness over 200 races of an international standard, which include Olympic rowers as well as the most talented crews in the rowing world.

The St. Joseph’s Prep Varsity 8 will contend for the Princess Elizabeth Challenge Cup.

To support the team, the Prep will host a send-off party from 6-9 p.m. Thursday, June 20 at Gillen Boathouse, 2200 Kelly Drive in Philadelphia. Admission is $50 per person.

Those who cannot attend are invited to make a donation to be used for the trip at this link and to enter a raffle for a free week of Learn to Row Camp, which closes on June 22.

Visit www.sjprep.org/HRRSendOff for more information on the event, and watch a video of the crew program here.