Bishops make pilgrimage to tombs of an apostle and Aboriginal boy 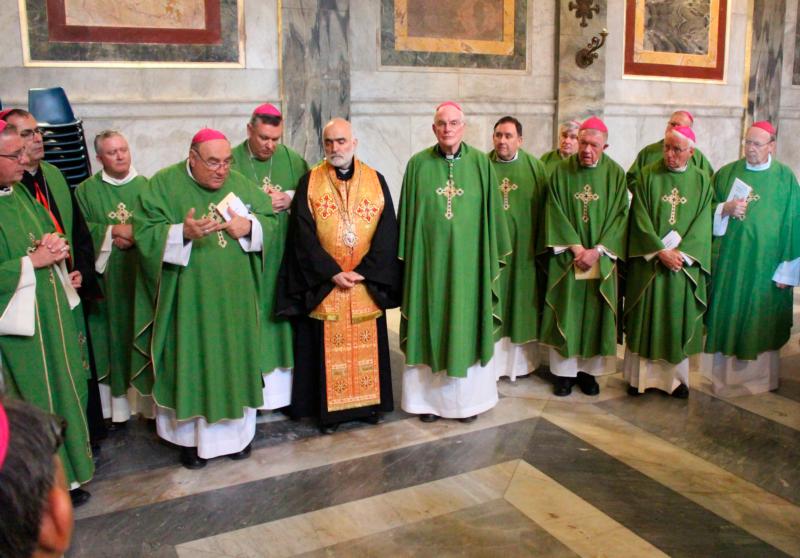 Bishop Christopher A. Saunders of Broome, Australia, left, gestures as he prays with other Australian bishops at the tomb of Francis Xavier Conaci at the Basilica of St. Paul Outside the Walls in Rome June 26, 2019. (CNS photo/courtesy Gavin Abraham, Australian Catholic Bishops Conference)

ROME (CNS) — Praying at the tomb of St. Paul is an obligatory part of the “ad limina” visits every bishop makes to Rome; the Australian bishops did that, then moved down the aisle in the Basilica of St. Paul Outside the Walls to pray at the tomb of Francis Xavier Conaci.

Bishop Christopher A. Saunders of Broome led the prayers June 26 for Conaci, an Aboriginal boy from Australia brought to Rome by a Benedictine priest who was convinced the young man would return home as a great evangelist of his people.

Instead, Conaci, who was robed as a Benedictine by Pope Pius IX, died in Rome in 1853 before his 12th birthday and was buried at St. Paul’s.

Bishop Saunders became a priest for the Diocese of Broome, where he now has been bishop for 23 years, because he wanted to work with and for indigenous and Aboriginal peoples.

He made his first “ad limina” visit in 1988 and said St. John Paul II asked him two questions — three, if you count “Where’s Broome?” — “What is the church in Australia doing for the Aboriginal people?” and what was he personally doing for the communities?

“We’ve done our very best as a church to respond” to the obligation to affirm the worth and value of the Aboriginal people and, with acts of charity and working for justice, to help them overcome the injustices they suffered with colonization, the bishop said he told St. John Paul.

“It hasn’t been a perfect response,” he said, “but, generally speaking, the church can be proud of its effort among Aboriginal people.”

The Australian bishops met as a group with Pope Francis June 24 and their “desire to support and minister to Aboriginal and Torres Strait Islander peoples” was one of the topics they raised, according to a statement from the bishops’ conference.

Bishop Saunders said he told Pope Francis about his conversation with St. John Paul and told him that if he would ask the same questions, “I would answer by saying we are probably doing the best we can. We’re doing some great stuff, but it’s not enough.”

“The Aboriginal people in our nation are still disadvantaged, they’re still on the margins,” he said, even though “the church has reached out and continues to reach out.”

The problem, Bishop Saunders said, is that “we live in a secularist society. We live in a privileged land. We live at a time of great prosperity. And I think it’s fair to say that, generally speaking, our nation are a people who look far too much to themselves, are far too satisfied in accumulating goods, suffer from gross ‘affluenza’ and this colors their outlook.”

The self-centered, consumeristic attitude limits the sacrifices people are willing to make to redress the injustices against the Aboriginal people, but also affects other social issues and public policies, the bishop said.

“It’s why we leave refugees and asylum-seekers on islands off our coastline, refusing them entry,” he said. “It’s why our doors aren’t open to those who are in need.”

“I think it’s probably typical of Western society at large,” the bishop said. “Our families are smaller, our needs for ourselves are greater, we consume more than we’re entitled to and we refuse to share what we have with other people.”

“What we do to our asylum-seekers and our refugees we’ve done to our Aboriginal people,” he said. “We try to marginalize them and make sure they don’t ‘invade’ or colonize us because they might take away from us the wealth we’ve enjoyed and the comfortability we long for.”

NEXT: Pope to worldwide prayer network: Heart of church’s mission is prayer