Catholic shelter operators in Mexico: ‘We live off people’s solidarity’ 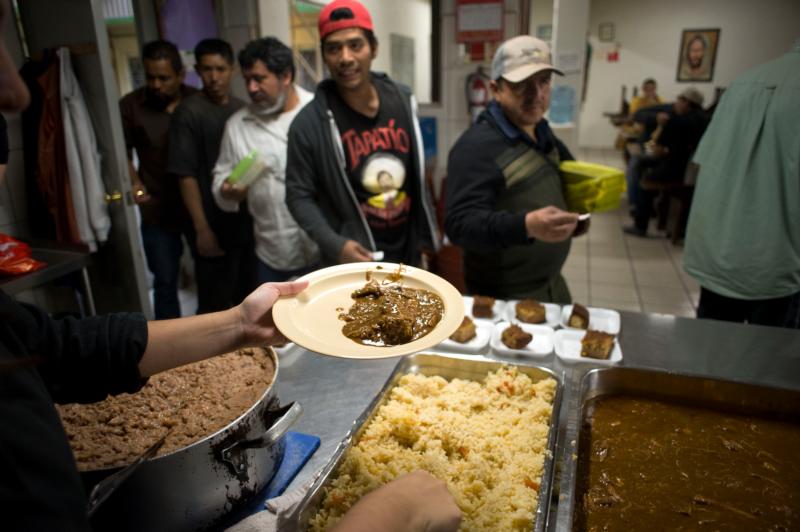 People are seen waiting in line for dinner in this April 25, 2017, file photo, at the Scalabrinian-run Casa del Migrante shelter in Tijuana, Mexico. The directors of Catholic-operated migrant shelters rejected a portrayal by Mexican President Andres Manuel Lopez Obrador that they mismanaged government money, saying they survived on donations and the good will of generous individuals. (CNS photo/David Maung)

MEXICO CITY (CNS) — The directors of Catholic-operated migrant shelters rejected a portrayal by President Andres Manuel Lopez Obrador that they mismanaged government money, saying they survived on donations and the good will of generous individuals.

They also said they were doing work the government has been derelict in handling as the waves of migrants moved through the country and thousands asylum seekers were being forced to wait on the Mexican side of the border as their cases proceed through U.S. courts.

“The government does not help anybody,” said Father Pat Murphy, director of the Scalabrinian shelter in Tijuana. “They used to give” — in past administrations — “but the Mexican government has cut off all aid they used to give to us.”

Scalabrinian Sister Leticia Gutierrez, former executive secretary of the Mexican bishops’ human mobility ministry, added on social media: “We have never received money from the government. Migrant shelters are independent and autonomous. We live off people’s solidarity and from foreign solidarity. (We) are not sustained by any authorities.”

Lopez Obrador set off the firestorm during a June 17 press conference, when he responded “yes” to a question on whether shelters would be operated by the government. He promised to open migrant shelters in the near future and also accused unnamed organizations of misappropriating public money.

“There are cases that can be proven of money being given to organizations to benefit migrants and it didn’t go to migrants,” he said.

The controversy over migrant funding follows Mexico striking a deal with the United States in early June to avoid escalating tariffs on its exports. In exchange, Mexico promised to deploy 6,000 members of its newly formed national guard –- a militarized police force — to its southern border to slow the flow of migrants.

Lopez Obrador has defended his deal with U.S. President Donald Trump, saying it saved 1.2 million jobs and avoided a trade war, just as the Mexican economy showed signs of slowing. A poll published June 12 by the newspaper El Universal showed 61.5 percent of Mexicans agreeing that “the government of Mexico (should) impede the path of migrants who try to enter the country without the proper papers.”

The president has spoken of “Franciscan poverty” in his approach to governing, which is so austere he took a 60 percent pay cut upon taking office Dec. 1. His pledge to curb corruption has meant cutting all funding to all civil society organizations, which he has accused of being “posh” and misappropriating government money.

Father Murphy said the Scalabrinian migrant shelter used to receive funding through a federal government program; the money was used to feed migrants and pay for utilities.

Some of the organizations in Tijuana receiving money were not working on migrant issues, he said. But he added, “We have to give them a very strict account for the money we get.”

Opening shelters, they say, is not an easy undertaking. Most shelters take security precautions to keep out human smugglers and make sure vulnerable populations are protected inside their premises. Sometimes provide migrants with medical attention, legal services and spiritual support.

Past attempts at housing migrants — such as with the caravans arriving in late 2018 — proved difficult for government officials, who sought no advice from actual shelter operators, they said.

“It’s not just food and clothing, it’s finding help for them, listening to migrants and attending to them physically and psychologically,” said Dominican Brother Obed Cuellar, director of the diocesan Dignified Border Shelter in Piedras Negras, opposite Eagle Pass, Texas. “The government only will see numbers, and that’s it.

Under the U.S.-Mexico deal, a plan known as Remain in Mexico will return more migrants south of the border to await their asylum hearings in U.S. courts. Mexican shelter operators say civil society groups and the Catholic Church have housed the more than 10,000 migrants already returned to border cities, with the federal government doing little to assist the situation.

“There are 25 ‘casas’ in Tijuana, but they’re pretty much all full,” said Father Murphy. “Many of them are understaffed. They don’t have the funds to keep going. It’s going to more and more difficult as people have to wait here longer and longer.”

The leadership of the Mexican bishops’ conference met June 17 with Lopez Obrador and discussed immigration. Archbishop Rogelio Cabrera of Monterrey, conference president, told reporters the church’s migrant shelters were “overwhelmed,” though they would consider opening more facilities to house migrants.

In a statement released later that day, the bishops said, “The criminalization and stigmatization of migrants and the defenders of their human rights are a worry that was expressed to the president.”

NEXT: Scottish bishops authorize independent audit of each diocese