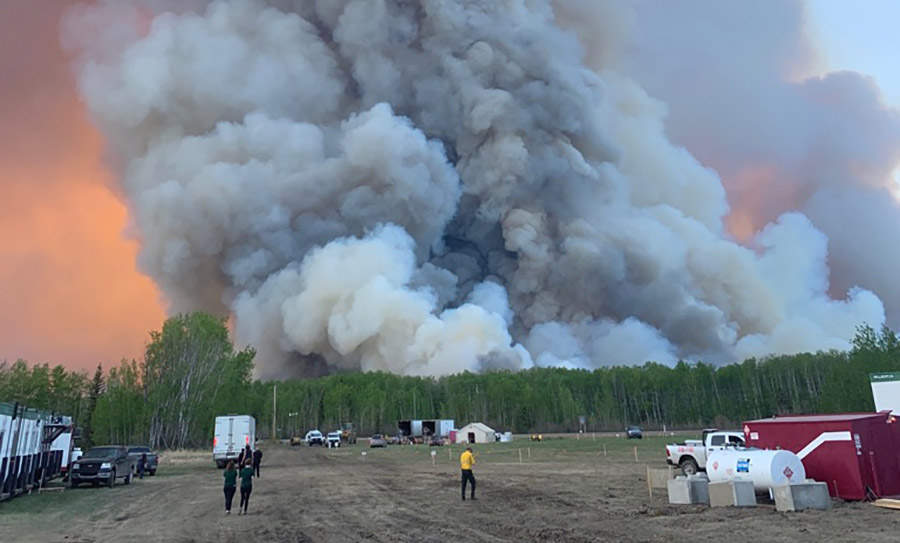 A forest fire is seen near High Level, Canada June 3, 2019. About 10,000 people in northern Alberta have been forced to evacuate since May 20 because of a series of spring wildfires. (CNS photo/Father Harry Kiggundu via Grandin Media)

Several other rural communities remained under evacuation and fire alert orders, however.

Elizabeth Lim and six friends welcome the opportunity to return to High Level June 3, two weeks after they fled the town of 3,900 people located 455 miles north of Edmonton via a smoke-shrouded highway.

“We got an evacuation warning beforehand, so we were prepared,” Lim said in a telephone interview. “But there was a lot of panic. It was my first time experiencing something like this.”

Lim and her fellow parishioners from Our Lady of Good Counsel Church in High Level initially left for Slave Lake to escape the Chuckegg Creek fire May 20. When that community was also put on an evacuation alert May 30, they fled once again and made their way to Grande Prairie.

The Chuckegg Creek blaze is the largest of 29 wildfires that have scorched thousands of square miles in northern Alberta. Overall, 10,000 people have fled from their homes in the region.

Sixteen homes in the Metis settlement of Paddle Prairie, population 544, were lost to flames.

“When you go down a road that you know the fire just swept through at 30 miles an hour and you see homes still standing there, that’s what I call a miracle,” said Kenny Laboucane, a Catholic resident of the town.

“When those flames go right up to the edge of a house and it doesn’t burn, being traditional Catholic guys, that’s our first thought: that’s God at work,” he said. “We’re really thankful for that and we’re grateful that nobody’s been hurt.”

A GoFundMe page to support the Paddle Prairie evacuees has been started.

Even after an evacuation order was issued for Paddle Prairie May 29, Laboucane could not idly stand by as his hometown was surrounded by flames. He and two other residents returned the next morning. With their experience as volunteer firefighters, they were able to help fire crews deployed there.

“We saw the flames flare up as they hit the spruce trees. I don’t know if you’ve ever seen a fire come at you, but it roars,” he said.

“They wanted us to leave, but we wouldn’t do it. This is where we come from, these are our homes. We know where everything is and where the potential dangers are,” he added.

Laboucane said it was difficult to know when residents could safely return.

“Every day the circumstances change,” he said. “It’s not over yet by any means.”

Having no previous experience with wildfires, Father Harry Kiggundu, pastor of Our Lady of Good Counsel Parish, did not take notice of the first reports of the wildfires in the province. However, when the fire danger forced him to cancel Mass at Christ the King Parish in Paddle Prairie, where he also is pastor, he knew things were getting serious.

“That did not feel good because I could not protect my Christians there,” he said.

Father Kiggundu was staying at the St. Henry Catholic Church in Fort Vermilion June 3. He has kept in contact with parishioners who are staying at the town’s Community and Cultural Complex.

Msgr. Charles Lavoie, vicar general of the Archdiocese of Grouard-McLennan, Alberta, which includes the areas affected by the fires, said prayer is essential in dealing with such trauma.

“This is nature unfolding in its freedom as God has given us,” Msgr. Lavoie said. “This isn’t God punishing us. Nature is taking its course. I would encourage them to continue to pray, even though they are dislocated from their homes. Put this in the hand of God. God is still at work with his people, even in this situation.”

NEXT: Walking together, Christians experience unity in diversity, pope says