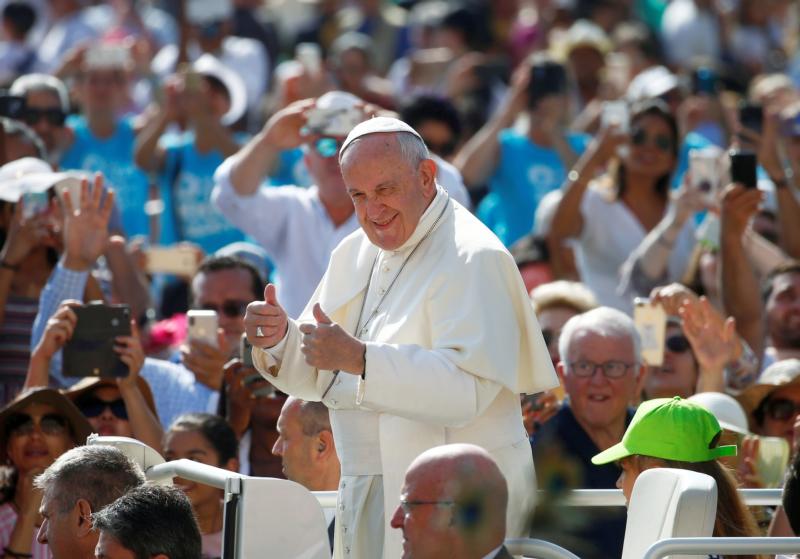 Pope Francis gives a thumbs up to the crowd during his general audience in St. Peter’s Square at the Vatican June 19, 2019. (CNS photo/Yara Nardi, Reuters)

VATICAN CITY (CNS) — Like an orchestra conductor leading a symphony of different sounds and harmonies, the Holy Spirit creates a masterpiece of unity and communion that extols God’s love, Pope Francis said.

In creating this harmony, the Holy Spirit “makes the church grow by helping it go beyond human limits, sins and scandal,” the pope said June 19 during his weekly general audience.

“The Holy Spirit is the creator of communion, he is the artist of reconciliation who knows how to remove the barriers between Jews and Greeks, between slaves and free people, to make them one body,” he said.

Continuing his series of talks on the Acts of the Apostles, the pope reflected on the gift of the Holy Spirit which the apostles received on Pentecost and was manifested in gusts of wind and tongues of fire descending upon them.

The wind that blew through the cenacle was “an eruption that does not tolerate” closed doors but instead bursts them wide open, he said.

Fire, which throughout biblical tradition is a symbol of God’s presence, immediately descends upon the apostles, thus “purifying and revitalizing them,” he added.

“The church is therefore born of the fire of love, a fire that burns at Pentecost and manifests the power of the word of the Risen One imbued with the Holy Spirit,” the pope said. “The new and definitive covenant is no longer based on a law written on tablets of stone, but on the action of the Spirit of God who makes all things new and is engraved in the hearts of the flesh.”

Pope Francis said that God continues to pour his Spirit upon Christians today, drawing the faithful to him through “divine attraction,” and he “seduces us with his love” so that all may receive a new life through him.

“Let us ask the Lord to make us experience a new Pentecost, which will open our hearts and tune our feelings with those of Christ,” the pope said, “so that we may announce without shame his transforming word and bear witness to the power of love that calls to life all who encounter him.”