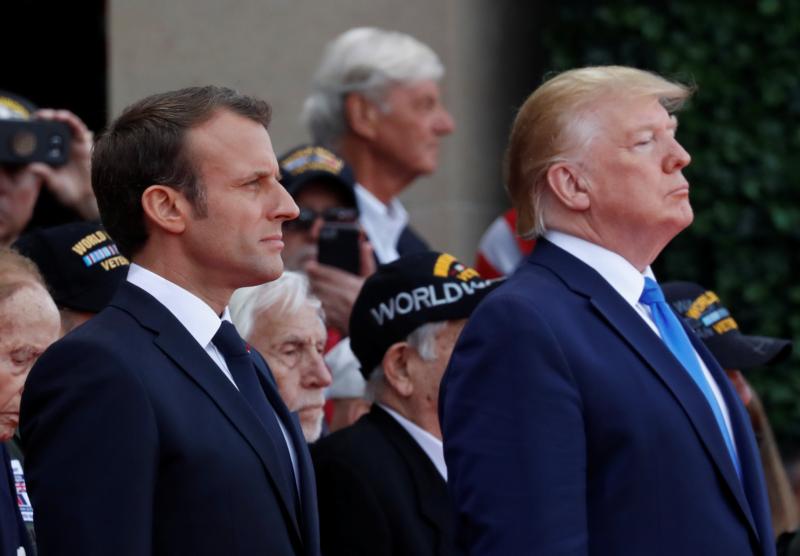 French President Emmanuel Macron and U.S. President Donald Trump stand together during a ceremony to mark the 75th anniversary of D-Day at the Normandy American Cemetery and Memorial in Colleville-sur-Mer, France, June 6, 2019. (CNS photo/Carlos Barria, Reuters)

“We know the landings on June 6, 1944, here in Normandy were decisive in the struggle against Nazi barbarism, allowing a path to open towards ending a war which had so profoundly battered Europe and the world,” Pope Francis said in a message to Bishop Jean-Claude Boulanger of Bayeux, France.

“I recall with recognition all those soldiers from France and other countries who had the courage to engage and give their lives for freedom and peace,” he said in the message posted on the diocesan website June 6. “I entrust them to the Lord’s infinitely merciful love, along with this war’s millions of victims, without forgetting those on the German side who fought in obedience to a regime animated by a murderous ideology.”

“I hope this commemoration allows all generations in Europe and around the world to reaffirm forcefully that peace is based on respect for every person, whatever their history, and on respect for law, the common good and creation,” Pope Francis said.

“And I ask the Lord to help Christians of all confessions, with believers of other religions and people of goodwill to promote a true universal fraternity, favoring a culture of encounter and dialogue, attentive to the small and poor,” he added.

The pope’s message was released as U.S. President Donald Trump and French President Emmanuel Macron, joined more than 3,000 D-Day veterans remembering the 1944 landings that saw tens of thousands of Allied troops from the U.S., Great Britain and Canada come ashore in what became a turning point in World War II.

The 75th anniversary was marked by a June 6 ecumenical service in Bayeux’s Catholic cathedral and the laying of wreaths at invasion sites, including the U.S. cemetery at Colleville-sur-Mer, near Omaha Beach, where nearly 9,400 Americans are buried.

During a commemoration event June 5 at the Abbey of Saint-Etienne in nearby Caen, Cardinal Marc Ouellet, prefect of the Congregation for Bishops, said there can be no world peace without peace between religions.

“Safeguarding peace is the responsibility of everyone, a responsibility for women and men of our globalized, lacerated and overly-armed world,” Cardinal Ouellet told an audience at the abbey where many of Caen’s residents found refuge during the battle of Normandy.

Archbishop Timothy P. Broglio of the U.S. Archdiocese for the Military Services attended the event.

Cardinal Ouellet said he was born just two days after the landings, which took place June 6, 1944, and he recalled with emotion how many young soldiers from Canada lost their lives on those shores.

Commemorating the events and their victims is “a duty” and “a permanent need” so people may always reflect on and be committed to avoiding other similar catastrophes in the future, he said.

The destruction and horrors that occurred during World War II, he said, “left an indelible mark on humanity” so much so that some people were left “unable to believe in God after Auschwitz.”

Today, he said, with so many ongoing conflicts and “unimaginable possibilities for the annihilation of people,” particularly by nuclear weapons, “the cause for peace appears more than ever as an ideal that is as necessary as it is impossible.”

The collapse of totalitarian ideologies has given way to “a long and heavy wave” of skepticism, disenchantment and relativism, he said.

“This pessimism, fruit of totalitarian disillusion, is in the absence and expectation of a religious sentiment that can come to the rescue of human reason and reawaken its desire for peace” in today’s world, Cardinal Ouellet said.

“That is why we are entering into an era of interreligious dialogue that is a sign of the times and a requirement of world peace, since there cannot be universal peace without peace between religions, or better, without people of faith coming together and being united by what they have in common.”

The Normandy commemorations followed ceremonies June 5 at the British naval base in Portsmouth, England, where Queen Elizabeth II, British Prime Minister Theresa May, Trump and other world leaders recalled the heroic work of the Allied forces.

Trump read excerpts from a prayer delivered in a D-Day radio message by President Franklin D. Roosevelt, noting the “mighty endeavor” being undertaken by Allied forces was meant “to preserve our republic, our religion and our civilization, and to set free a suffering humanity.”

Contributing to this story was Carol Glatz in Rome and Jonathan Luxmoore in Oxford, England.