Pope: Romanians, young and old, must hold on to their roots 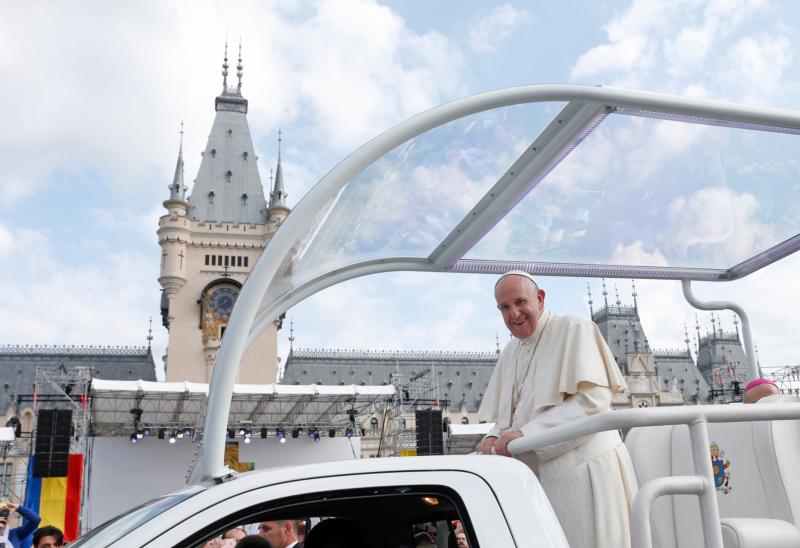 Pope Francis arrives for a Marian gathering with young people and families in the square outside the government Palace of Culture in Iasi, Romania, June 1, 2019. (CNS photo/Paul Haring)

IASI, Romania (CNS) — Pope Francis ended his second day in Romania with a festive meeting with young people and families that encapsulated his message of fostering dialogue between younger and older generations.

After arriving by helicopter in the northeastern city of Iasi June 1, the pope met with thousands of young men and women, along with parents and grandparents whom he called upon to pass along the wealth and knowledge that can only come from their long-held traditions and faith.

“You look to the future and you open the door to it for your children, your grandchildren and your people by offering them the best lesson that you learned from your own journey: Never forget where you come from. Wherever you go and whatever you do, don’t forget your roots,” he said.

Before attending the outdoor meeting, the pope visited Our Lady Queen of Iasi Cathedral, where hundreds of Catholics, including the elderly, sick and disabled, awaited his arrival.

Prior to praying a “Hail Mary” and giving the crowd his blessing, the pope said he was grateful for their warm welcome.

“Thank you for coming, thank you for being here with your sick ones and thank you to those who continue forward with your illness and offering them to the Lord,” he said.

As he made his way to the site of the meeting in the square outside the government Palace of Culture, the pope walked to the stage holding the hands of four children dressed in traditional Moldovan clothing.

The festive event began with the testimonies of several local Catholics, including a young man named Eduard who spoke of the joy and also the challenges of living his faith.

“In the university and workplace environment, I struggle to not be ashamed of my faith and not be afraid to give witness to it.”

Nevertheless, he said, young people know that “Jesus Christ responds to our deepest aspirations and we want to live our lives in friendship with him.”

The pope also heard the experience of an elderly couple, Elisabetta and Ioan, who spoke of passing along the faith to their 11 children, despite the struggles of doing so in a time when Catholics were persecuted.

“In the Lord, we found strength when we did not take into account the opinion of the communist authorities that we had too many children and thanks to him, we wanted to keep the promises of our marriage,” Elisabetta said.

“Just as Jesus did not lose heart on the way of the cross,” she said, “we did not want to give up either. Work and prayer have helped us to pass on to our children what we have received.”

In his address, the pope praised parents, like Elisabetta and Ioan, who prove that “love sinks deep roots through sacrifice and commitment, work and prayer.”

Parents, he said, are called to continue the mission of the apostles and “be sowers of good seed.”

Turning his attention to Eduard, the pope acknowledged the challenges young men and women experience in practicing their faith.

“Difficulties exist and they are evident,” he said. “But that cannot make us forget that faith itself offers us the greatest challenge of all, a challenge that, far from enclosing or isolating us, can bring out the best in us all.”

Recalling Isai’s prominence as one of Romania’s oldest cities and the epicenter of Moldovan culture, the pope praised the community’s openness and creativity which can spread a hopeful message to young people across the globe.

Throughout history, Iasi has been a starting point for pilgrims in the Middle Ages journeying to the tomb of St. James in Santiago de Compostela, Spain. Pope Francis said that it was emblematic of its mission to open new paths toward the future, toward Europe and many other parts of the world.

“You can be pilgrims of the 21st century, capable of imagining afresh the bonds that unite us,” the pope said. “In everything, let us make it our concern to open up paths that enable a sense of belonging.”