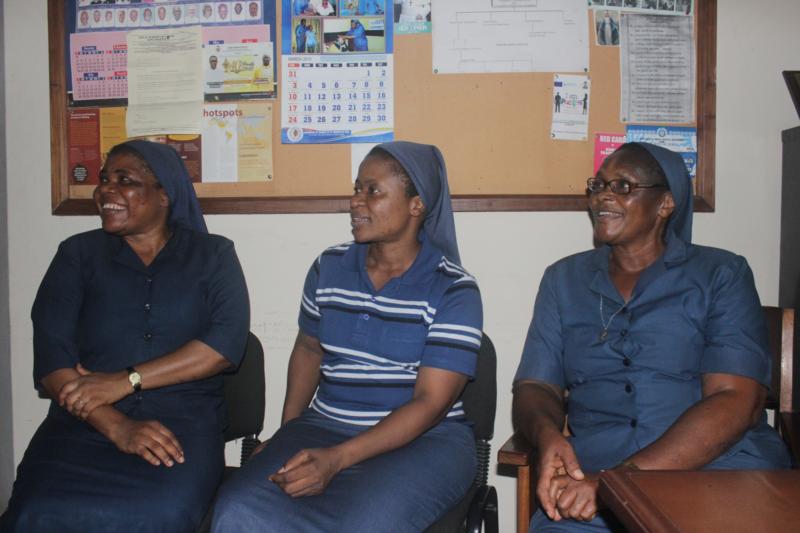 BENIN CITY, Nigeria (CNS) — Gloria Omoresewua was just a teenager in 2003, when a Nigerian woman brought her to Spain and forced her into prostitution. To escape her predicament, Omoresewua made an agreement with the woman, who had promised her a better life in Europe: The young woman was to pay her 45,000 euros (US$50,900) before she could gain her freedom.

For every man she was with for 30 minutes, Omoresewua earned 20 euros. Every month, she sent 500 to 1,000 euros home to her family in Nigeria.

After paying back about 30,000 euros (US$33,900), Omoresewua grew tired of prostitution and decided to quit. The woman threatened to turn in Omoresewua to police if she didn’t pay back all that she was owed.

“I didn’t have a job and was sleeping in the streets,” Omoresewua, now 33, told Global Sisters Report. “I was tired and wanted to come back home.”

“My father said I should come back, but my mother didn’t agree when I told her I wanted to come back,” she recalled. “My brothers said I should not come back. I decided to return when an NGO in Spain paid for my flight.”

Since Omoresewua’s 2015 return to Nigeria, sisters from the Daughters of Charity of St. Vincent de Paul have been helping her reintegrate into society. The Daughters of Charity, joined by members of other congregations, have banded together to fight human trafficking. Their hope is to dissuade girls and women from taking a dangerous route across the Mediterranean Sea to Europe, where they can be trafficked into prostitution or slavery.

The United Nations’ International Organization for Migration since 2017 has flown home more than 10,000 Nigerians who made it only as far as Libya, Mali or Niger. A 2017 report from the agency said of the 181,000 migrants who traveled by sea from Libya to Italy in 2016, more than 37,000 were Nigerian, including 11,009 women and 3,040 unaccompanied children. Eighty percent of women and girls who head to Europe are likely to become victims of sexual exploitation, the agency said.

Since 2015, Daughter of Charity Sister Bibiana Emenaha has been the coordinator of the Committee for the Support of Dignity of Women, which oversees efforts to fight human trafficking in Nigeria.

Founded in 1999 by the Nigeria Conference of Women Religious, the committee collaborates with anti-trafficking organizations, among them Nigeria’s National Agency for the Prohibition of Trafficking in Persons and the U.N.

With headquarters in Benin City, an inland town in a state where a trafficking is rampant, the committee has established projects and training programs that help reintegrate Nigerians who return home.

In 2007, the Nigerian bishops’ conference donated a two-story building to help resettle returnees. It serves as the only temporary shelter run by a Catholic organization in Nigeria for returning migrants.

“We make them feel at home here and take them in as members of our family,” Sister Emenaha said.

Sister Emenaha and others from her congregation provide professional counseling to the returnees and visit schools to raise awareness of trafficking dangers.

“The first thing we do is to give them one week just to sleep and rest. Then after that we begin to listen to their stories and counsel them, both religious and psychological counseling,” Sister Emenaha said. “We provide some form of education because most of them cannot even write their names. We visit their families through family tracing and reconcile them, especially those that came back when their families did not want them to come back or those that went without letting their family members know.”‘

The U.N. agency, Caritas Nigeria and other nongovernmental organizations provide financial support for those who return. Those who opt to enroll in school are offered scholarships by religious congregations. More than 400 trafficking victims have been rehabilitated, reintegrated and supported since the committee’s inception.

When Omoresewua returned, the Daughters of Charity trained her in hairdressing. After 18 months, the sisters provided funds so she could open a hair salon.

“We do prevention, protection, evaluation and monitoring to know how they are coping,” Sister Emenaha added.

Elsewhere, Sister Florence Nwaonuma, a member of the Sisters of the Sacred Heart of Jesus, runs the Fullness of Life Counseling and Development Initiative, an anti-trafficking organization in Benin City that rehabilitates returnees and provides empowerment programs so they can earn a living.

Her congregation also oversees projects that help families develop business skills and open their own shops. The sisters said such small businesses help lift families out of poverty and prevent family members from being lured away by economic opportunities abroad where the threat of being trafficked is greater.

Each year on July 30, World Day against Trafficking in Persons, Sister Gloria Ozuluoke a member of the Religious Sisters of Charity, organizes trafficking awareness programs across Nigeria.

“As a congregation, our mission is service to the poor, and we know that poverty has a huge contribution toward the trafficking of young girls and women outside Nigeria,” she told Global Sisters Report. “These people are mostly picked from the rural areas. We try to change their mindset that they can be successful here in Nigeria without traveling abroad.”

At a center belonging to the congregation in Lagos in southwestern Nigeria, women religious coordinate skill development for returning migrants in catering, tailoring, fashion and design.

Raising awareness about trafficking also is part of their effort.

The work of the sisters is having an impact. In 2017, the government passed an anti-trafficking law that punishes traffickers with prison terms and the sale of their properties, with the proceeds going to the federal government.

“Presently, we have about 23 cases in court waiting for prosecution against offenders,” said Sister Nwaonuma, who helped draft the law.

Egwu is a freelance journalist based in Nigeria.